President Trump has effectively become a wartime President. The rapid appearance of numerous Coronavirus hotspots across the nation has thrust Mr. Trump, like post 9/11 President G. W. Bush before him, into leadership of a country unexpectedly at war. The generals in this President’s war cabinet, however, are not military but medical. “Generals” Fauci, Birx and J. Adams, the Surgeon General, have emerged as the architects of a balancing strategy to defeat the virus without crippling the US economy more severely than necessary.

Tens of millions of workers have been doing their best to maintain composure, optimism and to adapt to a new lifestyle over the past 15 days. We suspect the announcement by the President late Sunday afternoon that the stay-at-home national guidelines are extended to the end of April was met with a collective groan, but also grim resolve.

Since major US equity averages reached their most recent lows on March 23, as of mid-session last Thursday, broad based indexes had recovered 18-20% from those levels. The retracement equated to a recoup of approximately 30% of total losses from the mid-February highs before Friday’s decline.

Thursday’s initial unemployment claims were the first since national social distancing had gone into effect and were far greater than consensus estimates. Clearly, the ability of the markets to “shrug off” the first of what will be many negative reports on employment indicates that the sudden sharp increase in new claims was not unexpected. It is logical to expect a stream of shockingly extreme indicator releases as the virtual standstill in economic activity becomes reflected in a panoply of statistical measures.

Several factors were at work fueling last week’s sharp rally, which produced a strong weekly gain despite selloffs on Monday and Friday. First, prices for many dividend paying issues had declined to a level that proved irresistible to investors who believed those dividends were safe. Strongly rising, but secure, dividend yields identify equities with high expected returns, or more technically, value stocks. The last six weeks have created a great number of these out of formerly low yield, growth issues.

Second, at recent lows, the internal dynamics of the equity markets had reached extremes rarely seen, at least in the last 11-12 years. For example, on at least two occasions, once in early March and again on March 20, the number of issues on the NYSE posting new annual lows exceeded 2/3 of the total issues traded. This is the definition of “oversold.”

Finally, liquidity for the economy is set to be delivered by the Treasury as a result of legislation passed and signed last week. The government is, in effect, floating a lifeboat for workers and crucial industries notably and severely harmed by the ongoing national quasi-quarantine. For at least the next several months, workers and consumers will be able to count on receiving some level of “income” to meet survival needs.

In addition to Congressional legislation, the Federal Reserve has vowed to provide as much liquidity for the Treasury as Congress and the Administration deem necessary to cushion a sudden cessation of virtually all non-essential economic activity.

While the equity markets have stabilized for the moment, albeit retaining extraordinary volatility, much remains unclear in the credit markets. For several days, the 90-day T-Bill yield has been negative for much of the trading day only to settle a few basis points above zero each evening. Other yields on the Treasury yield curve continue to sag.

This situation suggests that despite the Fed’s pledge of ample liquidity in not only the Treasury market but also the mortgage and short term corporate arenas, imbalances, illiquidity and uncertainties remain. The bond markets are not functioning normally and present further potential risk to the economy.

The Euro, the British Pound and the Yen have regained some of the substantial ground lost against the dollar over the past six weeks, but all remain well below their mid-February levels. Dollar strength coupled with sinking Treasury yields add up to deflation expectations. It is proving a difficult task for the Fed to counteract this trend, at least so far. A chart of the US Dollar index over the past 12 months is below. 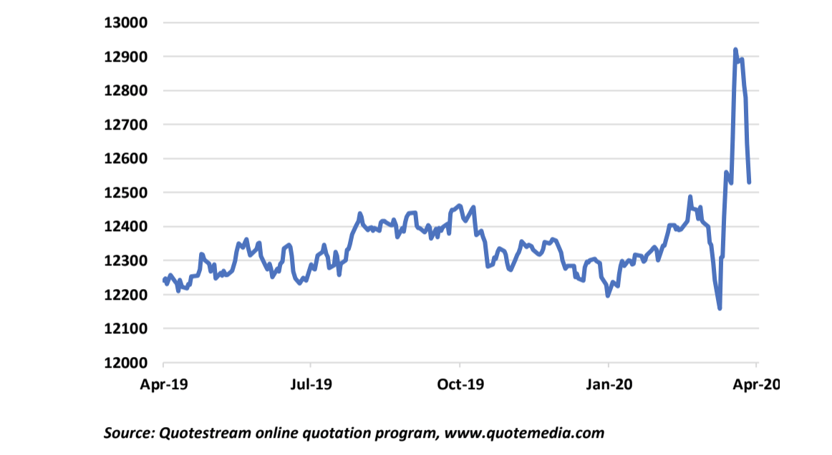 It is likely too early to decide that the equity markets may be finally seeing “across the valley” created by an intentional contraction of domestic and world economic activity. The President’s medical team is projecting that the peak of the Coronavirus infection’s spread could occur by mid-April, but that date will not signal a return to normalcy based on the President’s statements at his news conference Sunday.

Current indications from the President, in a TV interview this morning, are that early June is the closest that an “all clear” may be signaled. The lack of activity during the 8+ weeks until then will result in an almost complete dissipation of the strong US economic momentum that has been prevalent for the past several years. When to send Americans back to work will be a critical decision if the country is to quickly resume growth. It is likely to be the defining moment of Mr. Trump’s Presidency.

Equity markets have discounted a recession of indeterminate length. The first quarter will be impacted by the onset of the shutdown and the second quarter now looms as statistically, one of the worst in US history. Regardless of whether the statistical definition of two quarters of negative growth is met, the country will certainly feel “recessed.”

The US economy was in a strong expansion when markets turned lower in mid-February and the sudden transition to negative momentum will take time to reverse. It is impossible to forecast what lies ahead other than to continue to assert and believe that once the virus has run its course, we can expect a resurgence of economic activity. How quickly the US economy can rebound and what role pent up demand will play remains to be seen.

Equity markets corrected and relieved internal pressures and imbalances that accumulated during crushing declines with last week’s rally. It is not likely that the path ahead will be steadily higher, although an intermediate term rally is certainly a possibility in the wake of a sustained straight line drop. Pressures in the bond market and a strong whiff of deflation are signs that continued caution is warranted.

Investors (and their advisors) who have been patient and disciplined have borne (paid) the equity risk premium and will be present to participate in the eventual recovery. They are to be commended for courage in the face of a daunting market decline. In times such as experienced in recent weeks, it is extremely difficult to maintain objectivity. The consistency of a coherent investment philosophy and a long term plan are sometimes cold comfort but will get us to the other side.