The quarter opened with roughly six weeks of gains, as markets bounced from a deeply oversold condition. By August 15, several popular benchmarks were edging closer to their annual highs and bond traders were speculating about the possibility of a Fed policy shift, but the broad rally fizzled amid myriad reiterations from Chairman Powell and his colleagues that they remain steadfast in the campaign to rein in inflation.

Remarks by Powell at the annual Jackson Hole economic conference on August 26 left little doubt that the central bank fully intends to lean against economic expansion until the annual inflation rate has receded to the Fed’s 2% target. The performance of key global equity benchmarks for the periods noted are shown below and clearly reflect investors’ year-long heartburn.

Throughout 2022, bond prices have moved almost in lockstep with equity prices, or vice-versa. Increasingly hawkish comments from multiple FOMC and Federal Reserve Bank Presidents have been against a backdrop of yields rising roughly 1% during the quarter to their highest levels since just prior to the 2008-2009 financial crisis. After 12+ years of overt Fed bond market support, credit markets are now “on their own” as the central bank’s balance sheet is expected to shrink by $95 billion per month, beginning this past September. As the chart on the following page shows, as of October 6, a long road ahead faces the Fed.

The Fed Funds futures market currently suggests that the interbank overnight lending rate could climb another 1 ½% from its current 3%-3 ¼% range by March 2023. However, this estimate of the “terminal rate” has risen after each of the last three FOMC meetings. As the below chart indicates the range of possible levels next year is wide and as of today, as high as just above 5% by spring 2023. 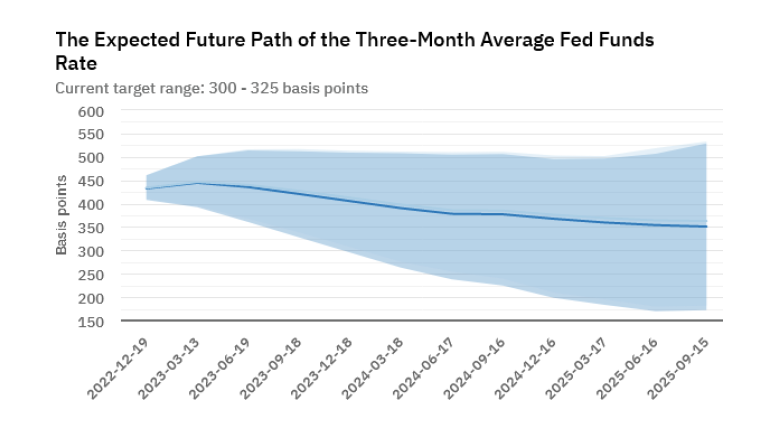 It is important to realize that the Fed is the only government agency actively attempting to slow inflation and that its only tools are to dampen money supply growth and to hike short-term interest rates. Neither of these devices are friendly to economic expansion and the steady downgrading of Q3, Q4, and 2023 corporate earnings estimates is correlated with Fed posture.

The 2022 midterm Congressional elections are one month ahead. Current trends suggest that Republicans will likely gain a working majority in the House and increasingly, at least a two-seat Senate margin. Notably, races in Nevada, Georgia, and Pennsylvania have moved toward Republicans over the past two weeks and are now within polls’ margins of error.

Strong Democrat momentum over the summer in the wake of the Roe vs. Wade overturn has faded. Polls have switched from sampling registered to likely voters as the election approaches and the GOP advantage evident last spring has reemerged. We suspect the impetus of this trend reversal can be traced to multiple recent surveys indicating that a growing majority of both party affiliates and independents believe the US is on an unfavorable economic track, a trend which has persisted since Spring 2021.[1]

Presently, there are two broad camps in the markets. A bullish faction suggests that the uptrend in interest rates is going to “break something,” e. g., the labor market, which to date has been resilient. The thesis is that this would compel the Fed to “pivot” from its aggressive stance in the face of a deteriorating economic and employment environment. Bears accept the same scenario, up to the pivot point, which they believe will not occur until inflation dies.

Many central banks, with the notable exception of the Bank of Japan, have raised their domestic interest rates in tandem with the US to support exchange rates against the dollar. Those that have not kept pace with the Fed have seen their currencies punished.

The Bank of England was compelled to reenter the UK bond market as a buyer after it raised rates ½% in response to the US’ September ¾% hike. Prior to the BoE action, the pound declined from $1.15/pound to less than $1.03 in a matter of hours, threatening to spark margin calls for Britain’s massive pension fund system as bond prices plunged. The BoE was able to stem the panic and the pound has largely recovered, but the UK is back into a position of expanding debt and the likelihood of continued high inflation rates if the new government’s spending plans are implemented.

After a bruising selloff to end the third quarter, investors could well see another substantial rally in the weeks ahead of the next Fed meeting, November 1-2. The essential question facing both the bond and stock markets is whether the ultimate result of Fed actions will be an economy spiraling into recession or a mild pullback that effectively cools inflation to manageable levels. Any conclusion at this point is little more than an educated guess.

[1] “Is the United States Heading in the Right Direction?” www.morningconsult.com, as of October 3, 2022.