US equity prices have continued to claw back great chunks of their losses since the March lows. The S&P 500 has gained roughly 4.25% from April 15 through yesterday’s close. The rally has broadened beyond the largest companies, which led the initial rebound. The Russell 2000 index of small capitalization issues has surged more than 8% higher over the same period including a nearly 4% gain in yesterday’s session.

Volatility has diminished markedly and daily trading volumes on the NYSE have declined from an average of 8+ billion shares/day during March to a more normal 5-6 billion. Intraday swings can still be breathtakingly steep and sudden, but overall, markets have continued the calming trend that began to emerge at the end of the first quarter.

Most broad based domestic equity indexes reached their highest close since the March lows yesterday and have risen roughly 30% from the bottom. The chart below shows the S&P 500 Index from December 31, 2019 through April 27. 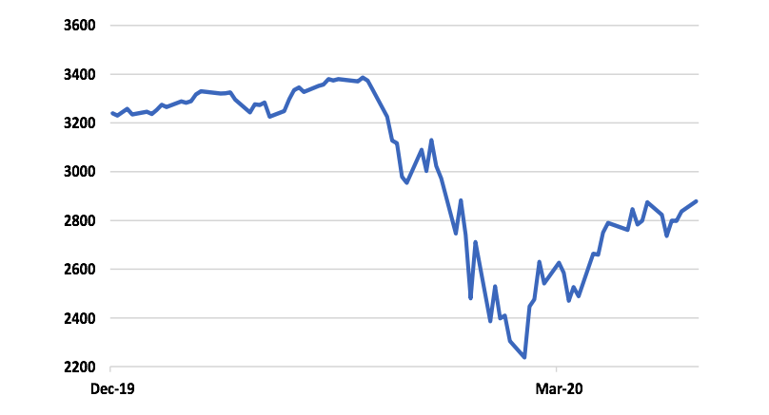 The index has staged a strong, extended rally after a vicious decline. Through yesterday’s close, it has retraced more than 55% of total losses stemming from the Coronavirus economic shutdown. Investors appear to be looking beyond inevitable disastrous economic statistics that will begin to appear in earnest over the next several weeks.

Most March economic indicators have been released and as expected, registered sharp drops in virtually all measures of domestic economic activity, including an accumulation of more than 26 million new unemployment insurance claims over the past four weeks.[1] That number is expected to grow. From virtually full employment just over two months ago, the US is now suffering a “real” unemployment rate of 20%.[2]

April 30 marks the expiration of several states’ shutdowns or stay-at-home orders. Limited re-opening of high touch businesses such as restaurants, barber shops and beauty salons began yesterday in Georgia.[3] Texas will permit resumption of activity at 25% capacity for malls, movie theaters and restaurants on May 1.[4] Several other states are also implementing recovery processes. Investors and government officials will be watching these first steps closely for evidence public health remains relatively safe.

In Europe, re-openings are beginning as well, albeit not as aggressively. Italy has indicated that as of May 4, restaurants will be able to begin offering takeout service to replace delivery only protocols, factories will begin limited activities with strict employee contact controls and family to family travel will be permitted.[5] Spain and France are instituting similar measures, as are numerous other EU countries.[6]

International equity markets have gained ground but not to the extent seen in the US. Note the contrast in the parameters of the Georgia and Texas re-opening orders compared to Italy’s. The chart below shows the MSCI EAFE Index of Developed Markets since the beginning of 2020. 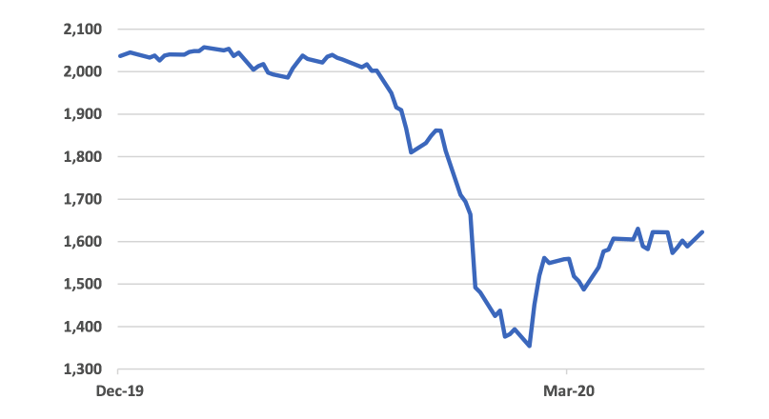 This index has risen just under 20% from its lows. Recall that many major global economies had endured several quarters of anemic expansion in 2019. Just as growth was beginning to re-ignite, the pandemic shutdown arrived. Equity market recoveries outside the US have not only been less robust but also appear to have stalled over the past two weeks.

We believe commodity prices will be early indicators a sustainable resumption of economic activity is underway. So far, the situation remains clouded and influenced by extraneous factors.

Futures prices for cattle and hogs have been rising steadily the past week, not in response to an upturn in demand but because packing plants are closing due to Coronavirus. Highly synchronized meat supply chains are in danger of fracturing. Animal farmers may be forced to euthanize livestock to accommodate upcoming generations, which will quickly lead to intermediate term shortages and higher costs for consumers.[7]

Oil remains mired in oversupply. Expiration of the May futures contract last week led to a stunning collapse of prices, reaching at one point, minus $35/barrel. Once the contract had closed, prices rebounded to just under $20 for the next settlement, June, which will expire in late May.

The US Oil Company (USO-NYSE), an ETF that allows individuals to speculate in oil markets without the financial requirements associated with futures played a large part in the negative price fiasco last week. To avoid taking delivery of massive quantities of crude it was forced to unload long positions in the expiring May contract. The Chicago Mercantile Exchange has imposed position limits on USO that necessitated liquidation of another large long position yesterday, exacerbating existing market weakness.[8]

Unfortunately, a similar scenario may be emerging as June delivery futures prices retreated to near $10/barrel in overnight trading today after a 20% loss Monday. Major global producers continue to pump crude at pre-shutdown levels with an approximately 10 million barrel/day cut in production not scheduled to be implemented until May 1.[9] At current prices, 70+ highly leveraged domestic producers are facing bankruptcy.[10]

Demand for oil has declined an estimated 30% over the past two months and land based facilities are expected to reach maximum capacity within the next two weeks.[11] Tankers anchored offshore have become ad hoc storage farms for crude shipped before global lockdowns went into effect. In the near term, prices are likely to remain under pressure but out month futures such as December, trading in the upper $20’s, suggest oversupply conditions should mitigate as global activity resumes.

Markets have discounted (“guessed”) the magnitude and extent of an upcoming recession triggered not by economic imbalances but by government fiat. To date, while losses for 2020 remain significant, global equity indexes have staged an impressive recovery.

It is no secret that second quarter GDP and all other statistical measures of economic activity will register historic declines, which may or may not have been fully discounted by the 35% plunge in prices from mid-February’s all-time highs. Market action suggests that perceptions may be shifting from glass half empty to glass half full.

The fact that several broad domestic indexes to have now recovered more than 50% of their losses is a positive sign. Markets are signaling that the US economy could recover rapidly once shutdown orders begin to lift.

Presidential election years have historically been on balance positive, in fact, strongly so. As re-openings expand across the country and if consumers regain confidence over the next 1-2 months, a net positive year becomes conceivable.

We don’t argue with markets and it isn’t possible to see into the future. Investors who “stayed in their seats” have been rewarded with a strong upswing in US equity prices. No one knows the reaction to the disturbing economic developments that will unfold over the next several months but as has already been amply demonstrated, remaining focused on a long term plan is the best method to survive the vicissitudes of a wild investment ride.