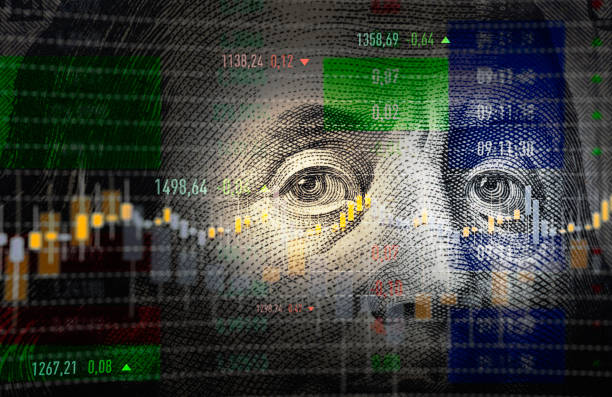 The tenor of US equity markets has changed over the past two weeks. A period of what could be characterized as “drifting higher” has been supplanted by a strong rally led by the widely followed Dow Jones Industrial and Transportation Averages, plus small cap and value issues, whose benchmarks are normally far less visible to the casual observer.

Since the end of February, the S&P 500 and the NASDAQ Comp have advanced roughly 4% and 2% respectively. The S&P has posted several all-time highs, but the Comp remains better than 4% below its last high, posted in mid-February. The DJTMI, perhaps the best proxy for US equities, is up 3.9% over the same period. These broad-based indexes are performing positively, but not to the extent occurring in other sectors of the marketplace.

The Dow Industrial and Transportation Averages, focused on more traditional components of economic activity, have gained 5.8% and 6.2% since the final trading day of February. These two yardsticks combined, have 50 constituents (30 Industrials, 20 Transportation). But it is in other relatively narrowly defined market sectors that patient investors have reaped the greatest rewards this year.

This admittedly brief time span nonetheless suggests two developing conclusions. First, the spectacular pace of earnings growth delivered by high tech stocks over the past year is diminishing. Earnings comparisons will no doubt be solidly positive for these online oriented companies over the remainder of 2021, but the exponential bottom line expansion that fueled the Comp’s explosive 2020 performance seems likely to pause, for the moment.

Second, investors are reaching higher on the risk spectrum, willing to accept greater investment risk as the economy regains momentum. Equities represented by the Russell 2000 Value index, for example, have relatively small market capitalizations, low per share prices, and in many cases, less than desirable balance sheets.

Year to date, this lesser known index has been the best domestic performer overall, gaining more than 25% compared to single digit increases for broader benchmarks noted above. The Russell 2000 and 1000 Value are up 17.5% and 10.6%, respectively, for 2021. We hasten to add, however, this bonanza follows multiple years of subpar results for all three.

This disparity is somewhat analogous to investors piling into junk bonds in the face of rising US Treasury yields, which we discussed last month. Embracing lower quality, whether in bonds or stocks is an indication that market participants are increasingly sanguine about the future of not only interest rates, but also the economy.

An economic sector experiencing near frenetic activity is housing. Anecdotal evidence suggests an accelerated “migration” in progress from high tax states/locales to lower tax environments with generally lower comparative costs of living. This trend, persistent since last summer, has fueled a price boom and contracting supplies in destination areas.

One potential pitfall for the housing bull market is the amount of equity existing homeowners are extracting from their residences. The Great Recession of 2007-2009 was sparked by the collapse of housing prices that left many “borrowed to the hilt” speculators owing more than the resale value of the underlying property, better known as being “upside down.”

The chart below details annual cash-out refinancing, as indicated. 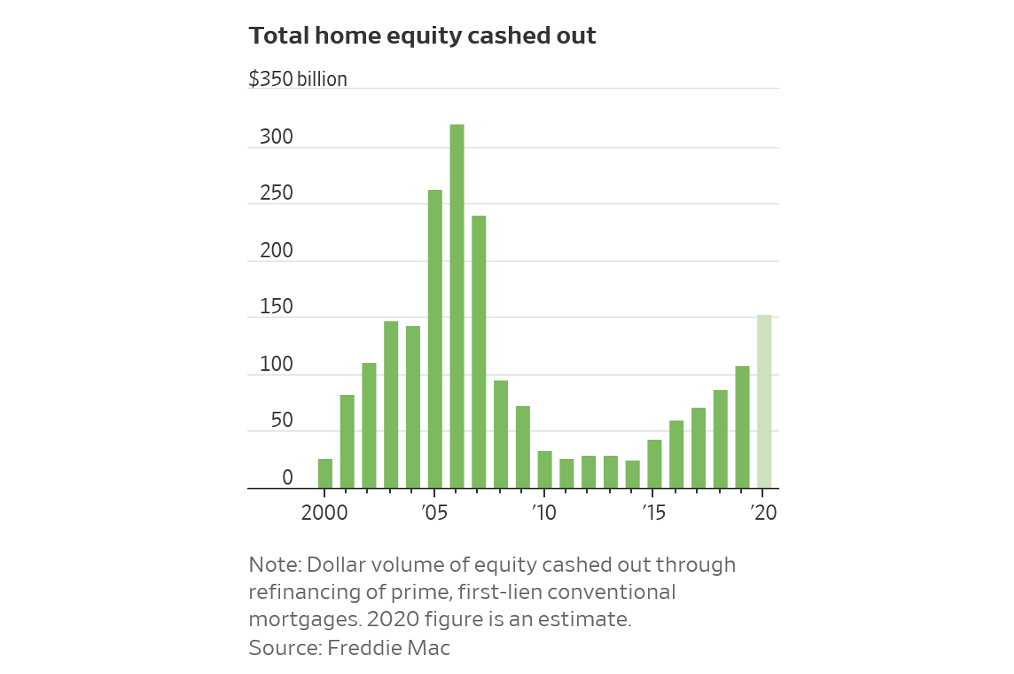 The working definition of a market “bubble” is a scenario in which prices advance at an unsustainable rate accompanied by near ubiquitous optimism. The problem with bubbles is that no one can accurately determine or predict when an advance reaches its apex and unsustainability and fear begin to outweigh boundless exuberance.

Is the housing market a bubble waiting to burst? Maybe, but likely not yet.

The Fed has made no secret of its intent to maintain a river of liquidity for the economy and by extension, mortgages. This is perhaps the single most important component of housing market stability. Mortgage financing is the oil that keeps the market functioning smoothly.

Unlike 2006-7, most new transactions are for main residences, not investment properties. While median prices are soaring, mortgage funding is available (see Fed, above) and purchases are, on balance, for the long term, rather than “flipping.”[2] This keeps vast numbers of speculative resells off the market, supporting the underlying price uptrend.

It is normal for risk aversion to abate during a bull market cycle. What begins after an extended decline as a narrow entry into high quality, low risk investments amid widespread pessimism and trepidation eventually broadens as economic support for earnings increases and fears of repeating t recent past diminish.

In a capitalistic system, capital is put at risk with a reasonable expectation of positive return. Stock investments are no exception. We view the evident change in the leadership of equity markets over the past six weeks, and greater acceptance of riskier assets especially, as a healthy development.

We leave readers with one final news item. On March 15, Dow Jones S&P released their 2020 annual survey of active mutual fund manager performance. In a period during which unexpected events created steep declines and equally sharp rallies, punctuated by a nearly 9 month extended rally to cap the year, better than 60% of active mutual fund managers failed to beat the S&P 500. For the 11th straight year.[3]

A Nobel Prize Laureate, speaking about the relative merits of individual stock picking and/or market timing as an investment philosophy, once reportedly said that, “Diversification is the only free lunch [in investing].”[4]

Attempts to identify individual issues or sectors that will perform better than the market is an endeavor as old as the stock market itself. A truism is that somebody will beat the market every single year. The problem is we can’t and don’t know in advance who that will be. And perhaps the worst news is that this year’s good (or bad) performance is not indicative of results the following year.