First of all, we wish all of you an enjoyable and relaxing Independence Day weekend!  Although it will certainly be a bit different from year's past, the weather seems to be cooperating here in Ohio, so we're hopeful you can find opportunities to get outside and have fun in safe and healthy ways.

Now, on to our monthly economic and markets commentary.

Over the past two weeks, US equity prices have seesawed generally lower with broad indexes losing on balance, roughly 2%. Markets have rallied in response to continuing indications that the worst economic conditions have passed then fallen on each new report of a jump in Covid-19 cases.

Away from the US, equities have risen during the same period. The EAFE Index of Developed Markets is up 1.7% and the MSCI Emerging Markets Index has risen 3%. Pending stimulus spending from the European Central Bank and evidence that the US economy has bottomed have contributed to burgeoning International investor confidence. This period (June 15-26) marks one of the very few occasions over the past several years that non-US equities have outperformed to this extent.

At home, economic statistics continue to indicate the economy’s trough was in April. May reports have generally shown improvement and in some cases, such as employment and retail sales activity, results have been far better than expectations. Consumer confidence rebounded and many leading indicators of economic performance turned higher in May.[1] As June numbers are posted in the coming weeks, we expect more positive surprises. Prices for the S&P 500 so far this year are shown below. 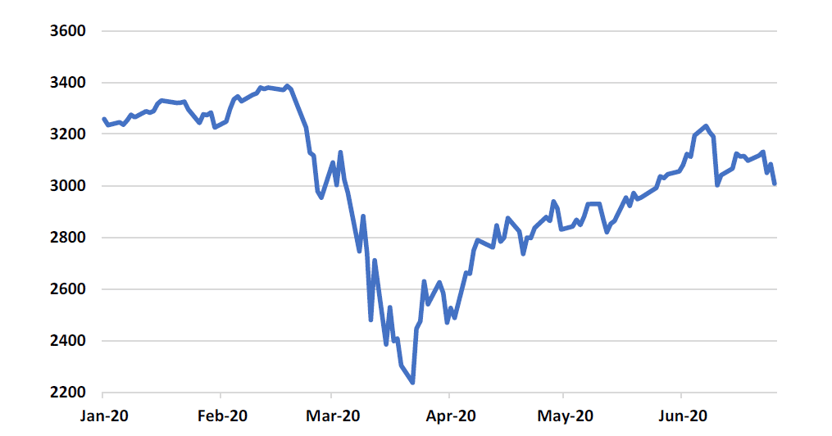 Since the middle of June, the press has focused on increasing new Covid-19 cases across the country, but especially in several states that were most aggressive re-opening. Texas, Arizona, and Florida have been in the spotlight as daily new infections have spiked sharply higher in contrast to late May and early June.

New cases, however, is a potentially misleading statistic and must be viewed in the context of other, arguably more sobering measures such as hospitalizations and deaths. Not every newly detected infection will become life-threating illness.

We looked at Florida’s experience since its re-opening. Recall that during the pandemic’s initial onset in March and April, predictions were rife that Florida, with its population’s advanced average age and high percentage of nursing home residents, was headed for an “Italy-like” experience.

Fortunately, that scenario did not materialize. Contrary to procedures in other states, notably New York and Minnesota, Covid-19 cases were not sent to nursing homes for isolation and those high-risk residents were aggressively protected. Florida took effective measures to protect its most vulnerable citizens.

After a review of federal guidelines, the Governor concluded that Florida met requirements for a phased reopening, which began roughly May 10. New cases were expected to increase as contact resumed and greater availability of testing identified more asymptomatic cases. As the chart below confirms, this expectation has been fulfilled, albeit possibly to an unforeseen extent. 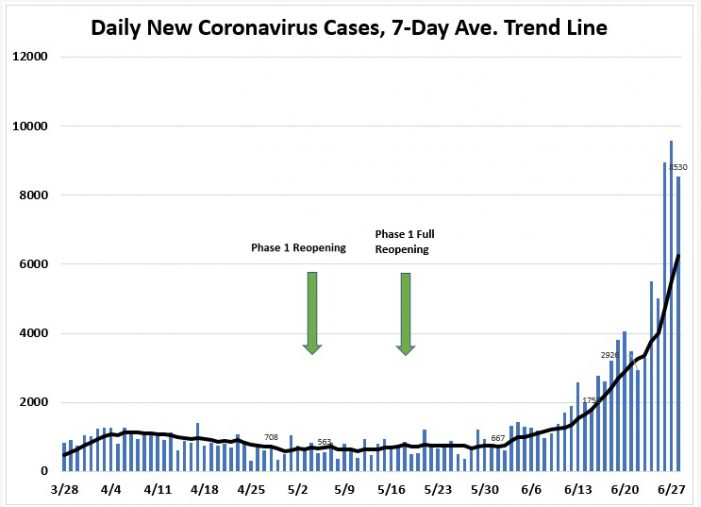 In isolation, this is a disturbing picture, but as we alluded to above, new cases do not tell the entire story. More important statistics are the concurrent numbers of hospitalizations and deaths, which afford a more accurate depiction of the pandemic’s impact and whether the surge in new cases will be as deadly as the press seems to be suggesting. The first chart on the following page shows the 7-day average of hospitalizations through June 26. 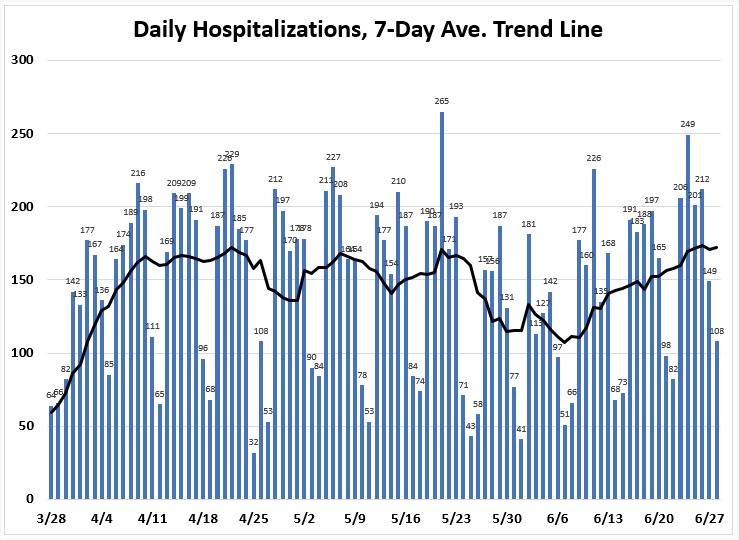 This chart paints the infection surge in a different light. Clearly, the trend of hospitalizations has risen this month but the numbers are no different statistically, from the peaks in April and May. The next chart tracks deaths attributable to Covid-19. 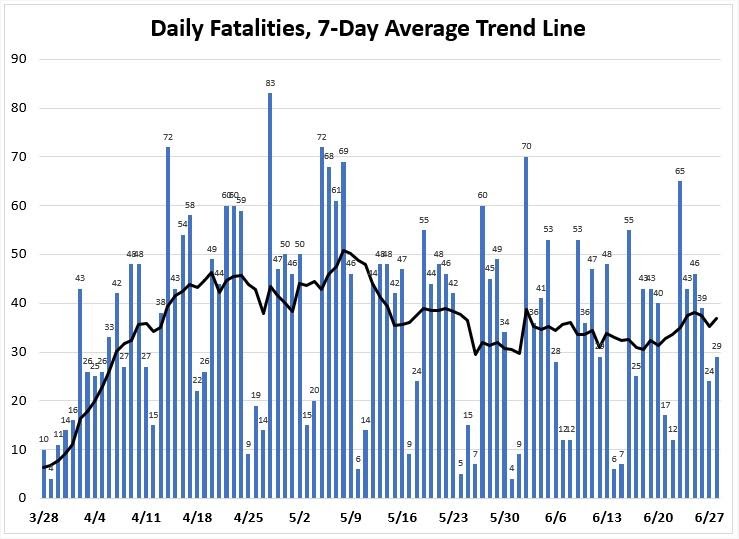 Governor DeSantis held news conferences June 26th at the Lee Health Center in Ft. Myers and on June 28th at Ascension Sacred Heart in Pensacola and addressed these questions. Below are some of the data he referenced.[2]

We can conclude from the above that increased testing is directly correlated with the spike in new cases. However, as the charts on previous pages illustrate, this has not resulted in matching uptrends in new hospitalizations or deaths. The bulk of transmission is sourced to younger generations who are less likely to display symptoms or suffer significant illness. Community transmission between the young and old remains the most potent hazard for those over 65.

Focus on new cases while ignoring rates of serious illness is framed in the press as evidence that re-openings were imprudent.[3] The data do not support this assertion.[4] Governor DeSantis and Governor Abbott in Texas have advised their populations to exercise conscientious social distancing and to wear masks when close contact is unavoidable. Neither has indicated that they expect their states to revert to shutdown conditions.[5] [6]

It is reasonable to expect a leveling off in the trend of new virus cases and absent any prolonged uptrend in hospitalizations or deaths, the press will begin to search elsewhere for news. Once evident that a new round of lockdowns/shutdowns are not coming, we suspect Covid-19 will fade from the headlines. Governor DeSantis’ overriding message is that individual responsibility and self-protection by those vulnerable to severe symptoms is paramount.

Investors have been understandably shaken by the surge in reported cases of Covid-19 and markets have reacted negatively to news reports highlighting uptrends in key states that have progressed well into re-opening protocols.

In the longer term, however, economic data will drive equity prices. Evidence continues to mount that the trough of the Covid-19 recession was in April and that the US economy is resuming expansion mode faster than almost any observer thought likely or even possible.

[1] “The Conference Board Consumer Confidence Index Stabilizes in May,” www.conference-board.org, May 26, 2020.

[2] Live streaming of both events. Bullet points are paraphrases. All data provided by Florida Dept. of Health.