What a difference a year makes! Last December, investors were reeling after steep declines by global equity prices that had lasted for the better part of three months. Christmas Eve 2018, which proved to be the low point of the selloff, was far from a joyous occasion.

The Fed had increased its benchmark short term interest rate steadily during the year and its announced intention to implement further increases in 2019 had investors wondering if the central bank would overshoot and choke off the US economic expansion. Additionally, the looming prospect of a trade war between the US and China as well as with other major partners led many market observers to predict a global recession would develop in 2019.

The Fed’s course correction last January that shifted policy from measured, predictable tightening to a “wait and see” posture sparked a strong equity rally that persisted through much of the year. Ultimately, low inflation and weakening global economic growth led the Fed to drop US rates in the second half of the year.

As the last trading day of 2019 fast approaches, investors have been handed nearly 30% annual gains by broad domestic equity indexes. International and Emerging Markets issues have risen as well, but both by less than 20%. Performance of the DJTMI since December 31, 2016 is below.

One of the most persistent trends in the US economy has been the extended growth of employment and wages. November saw a strong surge in wage increases for the lowest quartile of all workers relative to other groups, a trend that has been evident for more than two years. Data collected by the Federal Reserve Bank of Atlanta confirm average wage growth for the period from 11/2018 to 11/2019 was 4.5% for the lowest paid workers in the US labor pool.[1]

These data are characterized by the Bank as indicative of a tightening labor market.[2] Indeed, anecdotal evidence from government reports and private organization surveys have cited figures that indicate at least 1 million more jobs are currently unfilled than there are unemployed workers.[3] Annual wage growth as of November 2019 for the US labor force overall and segregated by quartile is illustrated below. Lowest wage worker’s gains are denoted by the green line. 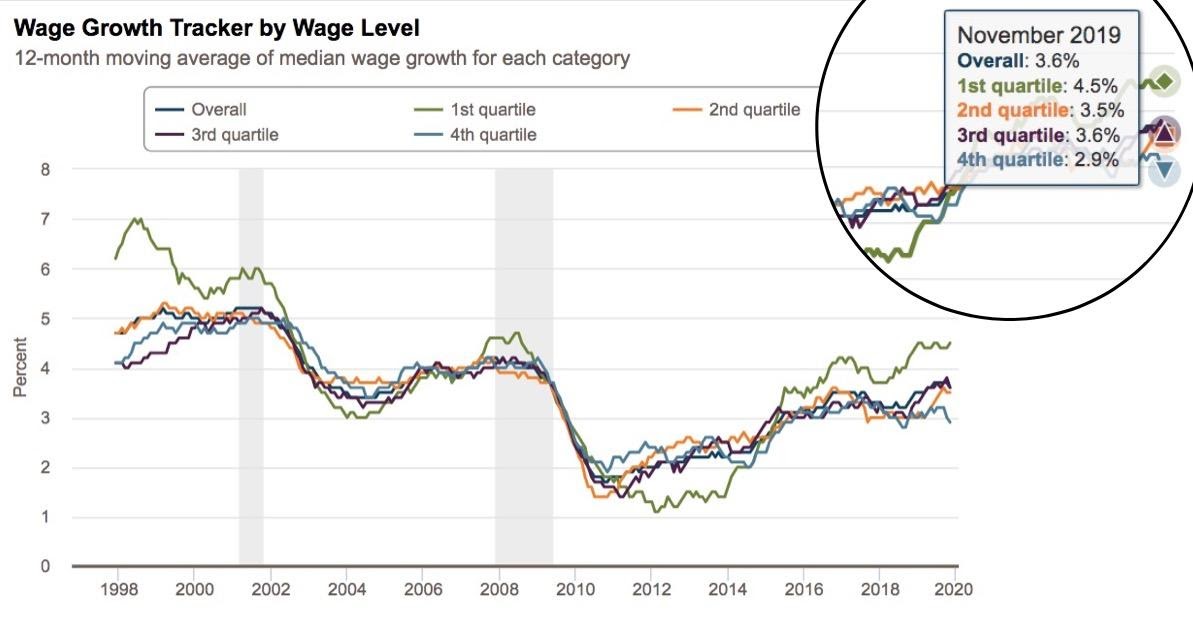 Inflation remains at levels that do not concern either the Fed or the credit markets. However, should the overall pace of wage increases accelerate even further above the current inflation rate of less than 2%, upward pressure on consumer prices could result to compensate businesses for rising labor costs. Any early warning signs will likely emanate from the bond market, our most sensitive indicator of changes in inflation expectations.

To date, no significant increase in long, intermediate or short term interest rates has been observed in credit market instruments since late September. In fact, short term rates have stabilized within a few basis points of the lower end of the current 1.50% Fed Funds target range. Should labor shortages result in even stronger wage growth, the odds that inflation will trend higher will increase. That development will not escape the attention of either the Fed or bond buyers.

One other factor that could influence inflation is the foreign exchange market. For the first three quarters of 2019, the US currency was in an uptrend. Uncertainty surrounding when or if the UK would separate from the EU led to downward pressure on the UK Pound and the Euro through much of the year. General Election results in mid-December that delivered a strong pro-Brexit majority in the House of Commons have lifted both the Pound and the Euro as some measure of uncertainty has been resolved.

The dollar has been in a moderate if uneven downtrend since its most recent peak in late September. The decline, however, should be viewed within the context of the strong uptrend that persisted since April 2018. A rising dollar tends to check domestic inflation as purchasing power for imported goods increases. Conversely, weakness increases import prices and diminishes purchasing power.

An appreciating dollar increases the cost of US exports for trading partners. Combined with the strong tariff regime prosecuted by the Trump Administration, there have been twin impediments to world economic growth in 2019. This has been reflected in a moderate contraction by the US manufacturing sector and a slowdown in the capital expenditures component of GDP during the second half of the year.

There has not been a significant enough change in relative currency values to support any conclusion that the recent downtrend will augment inflation, but a sustained decline could change that assertion. The US Dollar Index since December 31, 2016 is illustrated below.

US political rancor has subsided somewhat over the past 10 days with Congress in recess until January 7, 2020. A President has been impeached by the House for the third time in US history, however, the timing of a Senate trial remains unclear. Speaker Pelosi is seeking to shape the format of the trial, an effort which, so far, has met firm and vocal resistance from Senate Majority Leader McConnell.

Britain is poised to formally announce its departure from the EU on January 31, 2020, leaving the balance of the year to negotiate how a final separation agreement will be structured. PM Johnson has indicated that a no-deal withdrawal remains on the table should the parties prove unable to construct a mutually acceptable framework.[4]

The performance of US equity markets during Presidential election years has been on balance positive. As 2020 dawns, we see little on the immediate horizon that would argue for a differing result. But, of course, unforeseen and/or unpredictable events frequently account for significant impact on market returns.

Investors who managed to maintain the discipline to ignore short term distractions and predictions this year have been rewarded with significant gains. Focus on a long term plan remains one of the best methods we know to increase the probabilities of financial success.

We’ll have a detailed look at fourth quarter economic statistics in our upcoming quarterly comment. Until then we wish you a very Happy and Prosperous New Year!