Equities gave ground worldwide during the first quarter. March performance was mostly positive but could not overcome January/February losses. Accelerating inflation, rapid rises in interest rates, the war in Ukraine, and signs that investors are reevaluating the price they are willing to pay for growth combined to produce a down quarter for global stocks.

Asian markets were hard hit as new Covid restrictions in China resulted in late-March commercial center lockdowns.[1] China’s “zero Covid” policy has shut down ports, cities, and factories and will likely further impact global supply lines that have yet to make full recoveries from the 2020-2021 pandemic. The performance of representative global and domestic equity benchmarks for the first quarter of 2022 are below.

Interest rates have been moving higher since the Federal Reserve laid out its timetable for ending pandemic-related bond purchases and a return to a more “normal” rate environment in late January. During the quarter, the short-term rate rose from essentially zero to more than .50% by March 31. Intermediate and long-term yields in the Treasury market increased as well, but the net effect was to diminish the spread between yields at key maturities to virtually zero.

As the quarter ended, the Treasury yield curve had inverted at the 5-year level with a yield more than 10 basis points above the 10-year note and only nominally below the 30-year bond. What has been particularly noteworthy is the rapidity with which this inversion has occurred. In fact, Fed policy has essentially “turned on a dime.”

After a two-year policy of open market bond buying, the Fed, in March, not only ended its bond purchases but also initiated the first of possibly up to seven increases in its Federal Funds rate this year. While this change was widely anticipated, nonetheless, bond traders have been off-balance as prices have swiftly declined to reflect the central bank’s new stance.

So, in the space of less than a month, the Fed has moved from actively supporting the bond markets with ongoing multi-billion dollar open market purchases to the first stages of tightening. The stated goal is to stem and ultimately reverse the inflation ravaging consumers’ wallets. The greatest unknown, at this point, is whether the Open Market Committee will blink if equity markets swoon, and the economy slows in response to tighter credit conditions.

If the Fed is to be successful in quashing inflation, interest rates will need to be significantly higher than present levels, which are roughly 5% below the inflation rate. Unfortunately, it is likely that still higher inflation rates lie ahead. Sharply higher energy costs have manifested prominently in recent inflation indexes, but these costs have yet to fully permeate the economy.

One of the byproducts of rising rates is the cost of mortgages, which has increased from under 3% at cyclical lows to just below 5% as of April 6.[2] As the spring “selling season” approaches in many areas of the country, sellers who have enjoyed significant home value appreciation are beginning to rush to the exits as higher mortgage rates begin to shrink the pool of qualified buyers.[3]

Internal gauges of trucking operations show demand/supply declining at a time of year that has typically been one of strong demand. Indications are that the supply of available trucks is beginning to outpace demand.[4] Recent Dow Transportation Average performance confirms concerns. 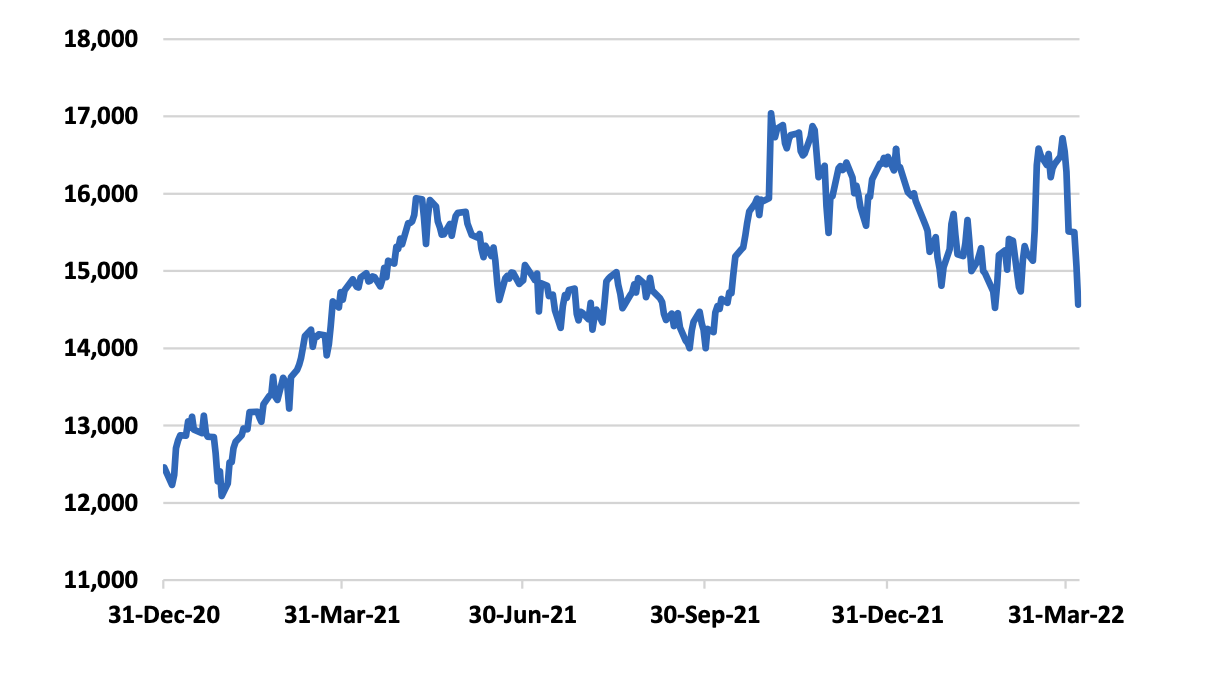 The war in Ukraine is driving up fertilizer costs (below), which threatens world food crops. In the US, some corn farmers (~10%) are switching to soybeans, which require less fertilizer. In Europe and other areas of the globe, farmers are reducing or eschewing fertilizer, which will diminish crop yields.[5] Rising natural gas prices, a key component of nitrogen-based products, are contributing to the problem as is the fact that the US and many other countries import potash, another essential ingredient, from Russia.[6]

The cost of everything needed to survive is increasing steadily and will eventually impact consumer spending. Personal outlays represent roughly 70% of GDP[7] and with confidence indicators registering pessimism about the economic future,[8] a rising cost of living combined with tightening credit conditions is a recipe for a slowing economy.

The President’s proposed FY 2023 budget offers scant hope his administration’s priorities will counter these trends. Mr. Biden’s “wish list” consists of substantially higher regulatory agency budgets, $2.5 trillion in tax increases[9], and, overall, little to promote economic growth, including unshackling the domestic energy industry. There is no acknowledgment that deficit spending could further exacerbate inflation, and the budget does not appear designed to inhibit further spending overreach.[10]

Investors will face challenging periods in the months ahead as the Fed turns toward attacking inflation. If there is to be success, borrowing costs will necessarily rise to levels not seen in nearly 15 years.

Will Chairman Powell have the temerity to persist when and if the stock market begins to discount the recession that could be a product of new Fed policy? His rapid course reversal in late 2018 after stocks had declined roughly 20% during the last “normalization” suggests that his resolve could waver. In our view, despite near-term rough waters and uncertainty surrounding Fed commitment, equities will remain the best means to outpace inflation over time.