Equity prices moved generally lower over the first two weeks of April. Performance has varied widely, with domestic large caps and industrial stocks represented by the DJ Industrial Average relatively steady, posting only a nominal net loss in the period.

The NASDAQ Composite Index (Comp) continues the weakest market sector as tech stocks undergo further downward revisions in P/E multiples. This high-tech proxy declined roughly 6% from March 31 through April 15. The Russell 2000 small-cap index has also been weak. Closing prices for the DJ Total Market Index (DJTMI), the broadest measure of US equities, since January 2021, are shown below. 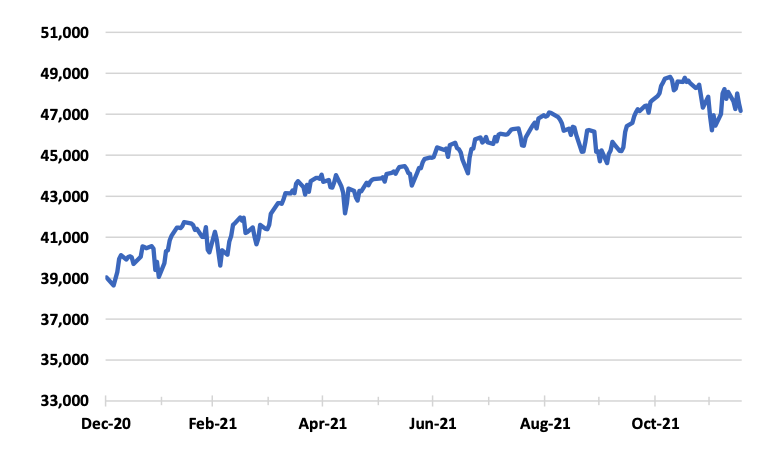 International stocks have also sagged. The MSCI EAFE Index of Developed markets dropped about 3% with Emerging Markets off close to 2%.

Both the Producer Price Index (PPI) and the Consumer Price Index (CPI) for March were released last week and as expected show inflation continuing to accelerate. Bond prices predictably declined on this news and subsequent hawkish statements from the Federal Reserve. Without some significant improvement in the inflation outlook, odds are increasing that the central bank will boost its short-term Fed Funds rate .50%, not once, but in the next two meetings.

While yields remain low by historic standards, the Fed’s stance has led to significant bond declines. A by-product of rising rates is a strong uptrend in the value of the dollar against major currencies. While this will effectively increase our export prices for trading partners, at home, imports will cost less (before inflation). A rising currency is a deflationary influence, which may aid the Fed in its mission. Prices of the DJ Dollar Index over the past 12 months are below.

Commodities, after retreating from their most recent peaks in late March have again turned higher. Oil, a prime mover in this arena, has begun to climb from a recent reaction low near $95, after touching $130 in early March. Grains have risen back to near-record levels as the war in Ukraine continues unabated, threatening wheat export capacity. Natural gas, a major component in many types of fertilizer has risen sharply over the past several months. Closing prices of natural gas futures since April 15 are below. 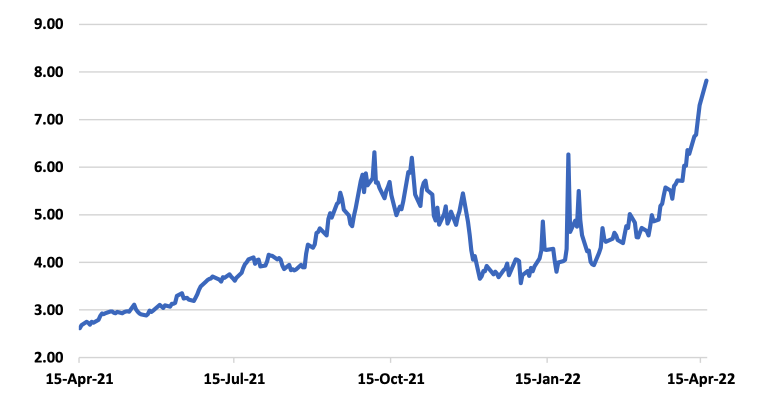 One development last week was not only surprising but also, welcome. The Biden Administration announced on April 15, that it intends to reopen lease sales on Federal lands, which it had prohibited since early last year.[1] Mr. Biden has so far been unsuccessful in jawboning Middle East petroleum producers to increase production and help fill the gap created by increasing world demand and domestic output that remains below pre-pandemic levels.

The real test to determine if this move will have any impact on crude markets will be whether the Interior Department resumes processing and approving drilling applications. The administration has repeatedly asserted that roughly 9,000 leases previously awarded to companies are intentionally not being accessed, and in turn, blaming producers, and the Ukrainian war for the sharp run-up in prices this year.

While it is true that the leases referred to have been acquired, the sticking point is bureaucratic recalcitrance approving drilling on those properties, which has kept domestic output relatively static since President Biden took office.[2] Without drilling permits, leases are essentially useless. Hopefully, new sales will be coupled with a reduction of climate change-focused red tape.

The Biden Administration is beginning to realize that augmented domestic oil production can provide meaningful relief from elevated prices. Unfortunately, after over a year of stifling output with anti-fossil fuel regulations and policies, the industry cannot simply “turn on the spigots.”

Identifying and leasing properties for oil and gas exploitation is only the first step in a long process to determine if a location has the potential output to recover the vast expenses involved in bringing a well to production. The industry’s ability to rapidly ramp up US exploration has passed.

Capital expenditures in the industry plunged last year, persist below historical averages, and are likely to remain at levels not conducive to adding new capacity until the administration’s regulatory constraints are relaxed.[3] Allowing lease sales is undeniably positive but myriad steps stand between obtaining a lease and producing oil or gas; all of which cost money that cannot be recouped from a dry hole.

On Capitol Hill, Democrats are pushing for a new round of Covid relief spending, however, this time, “only” $10 billion. The Build Back Better bill continues to lurk in the shadows as the House passed a budget that encompasses most of its agenda, including $2.5 trillion of tax increases.[4]

In our view, the budget legislation will be moribund. Democrat Senators Sinema and Manchin blocked previous efforts to implement many of the bill’s initiatives, including new taxes, and we’ve seen little indication their positions will change. Additionally, House and Senate Democrats in vulnerable seats are likely to resist a historic tax increase in advance of mid-term elections.

One issue that could influence the upcoming mid-terms is that moderate Democrats in the House and Senate are not falling in line with the President’s decision to not renew Title 42. The provision was implemented by the CDC in 1977 to allow border patrol agents to refuse entry to the US if their country of origin has a source of public health risks, e.g., Covid.[5]

Most observers suggest eliminating this constraint would significantly increase the volume of individuals wishing to enter the country illegally. Recent statements indicate moderates are apparently yielding to pressure from constituents in border states to resist this action. Congress can reinstate the requirement or prevent it from lapsing in late May.[6]

Unless President Biden and the Democrat majority in Congress begin to promote pro-growth economic policies in both the economy and the energy industry, which have been noticeably absent in legislation to date, it is reasonable to believe investors could be vulnerable to further equity and bond price declines.

Regardless of near-term swings in equity prices, adhering to a coherent investment plan and acceptance of the fact that long-term gains are built upon short-term volatility will support the discipline necessary to remain invested in the face of erratic market performance.

[3] “Where Has All the Capex Gone? E&P Investment Down Despite Rising Prices and Cash Flows,” www.rbnenergy.com, September 21, 2021