Global equity prices have remained under downward pressure over the past two weeks, punctuated by two strong rallies, including yesterday’s recovery. Ongoing war in Ukraine, signs suggesting the US economy is slowing, the rising cost of living, and steadily rising interest rates are troubling investors. Growth stocks have been particularly weak as markets continue to shave earnings multiples for these former market leaders.

EU bourses have also been soft, notably Germany, which is heavily reliant on Russian energy. The DAX index has dropped more than 14% from its peak in early January. Sanctions designed to penalize the Russian economy are also affecting Western Europe.

Through March 15, most broad domestic equity benchmarks remain lower by double digit margins since the end of 2021. The US high-tech corporate sector, heavily represented in the NASDAQ Composite Index (Comp) is off roughly 17%. International Developed and Emerging Markets indexes have lost comparable percentages.

China has seen the steepest losses in recent weeks. In addition to ongoing credit and real estate problems that surfaced last fall, the Hang Seng index has plunged 11% over the past two days as the country’s zero Covid policy has led to new lockdowns in several cities, affecting many millions.[1] Performance of the Hang Seng from January 2021 through March 15 is shown below. 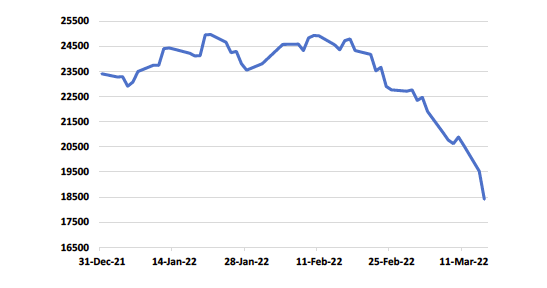 The Federal Reserve Open Market Committee (FOMC) meets this week and should announce a short-term interest rate increase. The Committee intends to raise its Fed Funds rate target range by ¼% to 0.25%-0.50%, in line with Chairman Powell’s indication that a 1% total increase should be expected over the course of 2022, again in a series of ¼% increments.[2]

However, M2 money supply growth has not been targeted by the Fed, according to meeting notes released last month[3] and deficit spending by Congress continues, per the $1.5 trillion omnibus bill passed last week. Without slowing annualized M2 growth (currently 12.5%[4]) and increasing interest rates closer to the current 10% inflation rate, we have little optimism announced Fed policy changes will make a meaningful dent in inflation.

Yields in the Treasury market have been rising in anticipation of the Fed’s two year, $150 billion/month bond buying program ending, followed by tightening. In the past two days, bond prices moved sharply lower pushing yields above the highs posted early last summer. The downward trend for bonds is likely to continue as interest rates begin to “normalize”.

The Fed faces a quandary. The FOMC is committed to increasing borrowing costs, but the global economy is slowing due, in part, to trade disruptions with Russia. Tightening could exacerbate developing weakness. The likely result of hiking rates into a slowdown would be stagflation (stagnant growth rates with elevated inflation), last seen in the late 1970s.

The intangible in Chairman Powell’s plan is diminishing economic activity, which could be a “natural” counter to inflation and reduce pressure to tighten. Oil prices, one of the largest components of inflation indices, have retreated after reaching an intraday peak at $130/barrel early last week. Closing prices of WTI oil futures since January 1, 2021, are shown below. 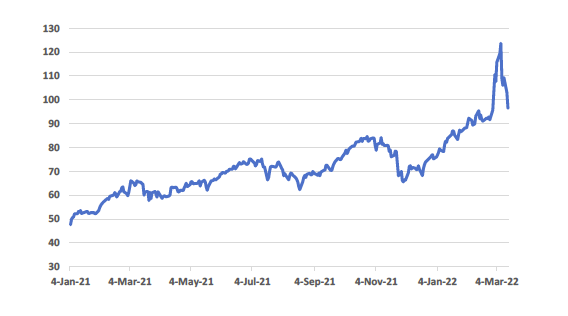 Russian oil is still reaching markets, which means that supply concerns in the wake of Western sanctions may not be as serious as originally feared, possibly mitigating energy inflation.[5] In fact, the full range of US sanctions against major Russian banks and the complete suspension of Russian oil trading do not fully take effect until June 24th.[6]

Meanwhile, as noted above, China has reinstituted several citywide lockdowns, including Shenzhen, its Silicon Valley, in response to an upsurge of Omicron cases.[7] The city’s port, one of the world’s largest, is closed, which could well stall the recovery of world supply chains. This development, combined with a projected slowing of Ukrainian wheat exports, which represent 10% of the world’s supply, is not good news.[8]

The war in Ukraine is an ongoing humanitarian tragedy. Russian tactics appear to have progressed from a hope for quick surrender in the final days of February to an indiscriminate, grinding assault on major cities. Civilian casualties are mounting.

Mr. Putin has become increasingly bellicose in recent statements, threatening NATO as it increases military support for the Kyiv government.[9] In our view, the US should remind Mr. Putin that it remains a superpower and that NATO and the US are capable of action beyond economic warfare if provoked. History has repeatedly demonstrated that dictatorial regimes respect strength but are emboldened by perceived weakness. The time to halt Russia’s aggression is now.

Investors have been challenged so far this year as returns from equity and bond portfolios have been on balance negative. Persistent inflation is affecting consumers at all income levels with the sharp increase in gasoline prices perhaps its most visible manifestation.

Equity markets offer returns as a reward for accepting inherently greater risk than fixed income, but at times returns are negative. Since January, stocks have generally trended lower but as surely as day follows night, at some unknowable point, the worst of events to come will have been discounted. Markets always look far ahead, but as we’ve witnessed in 2022 (war) and previously in 2020 (Covid), unforeseen events can drive prices in real time.

We cannot know whether weakness will continue, nor if it does, for how long. Investors with a long-term plan who exercise the discipline to “stand still” as volatile markets fluctuate will be present when inevitable rallies occur. It is important to remember that on average, three out of four years produce positive equity returns and that missing even a single day of strong gains by being out of the market can materially detract from annual performance.