August is traditionally quiet on Wall Street. Congress is in recess and many US families are on vacation. The pace of trading in the equity markets slows and typically, not much net progress is posted by benchmark indexes. But this August was different, in line with the unique nature of 2020 so far.

Global equity prices posted strong gains for the fifth consecutive month. Trading volume slackened, but tech leadership, earnings surprises, and evidence that the economy is surging kept the rally intact. Performance by key equity benchmarks for August, Q3, and YTD 2020 are below. 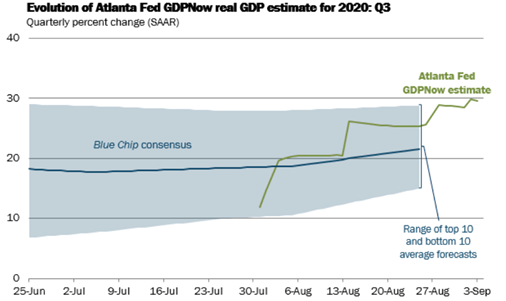 Considering the above chart, it is not difficult to justify the strong equity performance since late March.

August delivered striking news from the Federal Reserve Board of Governors. The month’s post-meeting press release held some rather surprising, but welcome news for equity investors worried that the Fed might alter its accommodative stance as the economy roars back.[1]

The Fed announced that it is abandoning its longstanding practice of pre-emptively raising interest rates and tightening monetary policy to head off inflation.[2] This major policy shift eliminates the near reflexive anticipation of rising inflation in response to the economy nearing among other things, full employment, that has undoubtedly contributed to several episodes of equity weakness over the past 10 years.

The most recent evidence of this effect occurred in late 2018 as global equity prices plunged over the six-week period ending Christmas Eve. The decline appeared to be in response to the Fed’s intention to maintain a policy of “measured rate increases” through 2019, equating to a roughly 2% cumulative increase. Trying to head off inflation that hadn’t appeared and in fact has not appeared over the succeeding 2 years has now been acknowledged as a mistake by monetary authorities. As we have frequently noted in these pages, inflation has been a non-issue since 2008.[3]

The Fed had announced in June that it expects to maintain the current accommodative, low interest rate environment until at least 2022, but the latest news takes that scenario a step further. The economy will now be given “running room” to regain the employment levels reached during 2018-19 and spring 2020.

The Fed’s stated inflation target of 2% remains in place, but the late August meeting minutes confirmed that this target is now soft. Stated guidelines now are that a “modest” increase above 2% is acceptable in the interest of keeping the economy’s recovery/expansion in place. The Board further clarified that its goal is to create an environment that will support full employment rather than, by default, to expect that a strong labor market will lead to inflation.[4]

The longer term implications of this revision of priorities are enormous for not only investors, but corporate Financial Officers. No longer will companies be looking over their shoulder fearing a Fed tightening simply because the economy and the labor market are strong.

Stability in monetary policy has often been lacking under past Fed Chairmen. A decade long series of seemingly knee-jerk tightenings erroneously anticipated inflation that never materialized. The Fed has finally accepted the demonstrable reality that low unemployment and a strong economy can coexist without igniting and/or accelerating inflation.

Late Notes: The first trading days of September have seen the tech rally evaporate, almost overnight. The giants that have powered both the NASDAQ Composite Index and to a lesser extent the S&P 500 since the March lows suddenly and significantly reversed course, bringing the rest of the US equity market with them. Steep losses by leaders such as Amazon (OTC-AMZN), Apple Computer (OTC-AAPL), Microsoft (OTC-MSFT), and Tesla (OTC-TSLA) last week signaled the onset of a correction to the upsurge that has characterized markets since April.

The selloff does not appear to have been precipitated by a specific event. The trigger may simply have been a cumulative realization that “trees don’t grow to the sky.” Earnings of these and myriad other companies have been stellar, vastly exceeding the most optimistic predictions. As the recovery continues to gather steam, analysts are raising their revenue and earnings estimates for the third and fourth quarters in virtually all sectors of the economy.[5] However, these expectations, most likely, had been discounted by investors at recent highs.

So, is the tech swoon a signal that corporate earnings are set to flatten out or decline next year? Perhaps.

It is conceivable that as Covid-19 shutdowns loosen further over the next 4-6 months the nearly parabolic trend of earnings increases for the tech high-flyers could moderate. The degree to which the economy reverts to traditional operating protocols and the extent to which it retains at least some virtual aspect in place is unknowable in advance. Less reliance by corporations and consumers on online activities and tools could certainly mitigate more unexpected, unpredicted earnings surges.

In our view, the tech led selloff is simply an indication that future anticipated returns to investors have diminished from the lofty levels of late spring and early summer. The correction will end when investors begin to perceive significantly greater value in equities compared to what was offered at last month’s highs.

Markets represent the collective opinions of millions and at this point the verdict appears to be that prices have moved ahead of risk expectations and a downward adjustment to more attractive expected returns is in order. Price declines will necessarily increase expected returns.

There is, of course, no clear indication what level will satisfy bargain hunters. Suffice to say that the degree of patience exhibited by long-term investors during 2020 has been its own reward. We see no signs in statistical measures of economic activity or sentiment that suggest a sea change in the global recovery’s trend is in progress or in the offing.