One by one, broad based US equity indexes are reaching new all-time highs, almost like dominoes falling. In the last two weeks, the S&P 500 and the DJTMI have followed the NASDAQ Composite into new record territory. The closely watched but relatively narrow Dow Jones Industrial and Transportation averages are within roughly 3% of their record closes, up from 5% deficits two weeks ago and +/- 10% at the end of July. Investors are demonstrating conviction that the domestic economy is in a steady recovery as COVID-19 restrictions diminish.

Equities predicted economic recovery with an upsurge from the late March lows and new highs by important US benchmarks are forecasting further upside progress for domestic GDP. International and Emerging Markets Indexes have not yet moved into comparable new territory but the global trend toward a resumption of growth is unmistakable.

Tech companies remain the most visible manifestation of the equity rally but quietly, more sectors of the US economy are responding to the stimulating effects of low interest rates and a resumption of consumer activity. Optimism is rising in corporate boardrooms as the second half of 2020 appears poised to deliver growth greater than any envisioned during the shutdown in March and April.

One of the most sensitive leading indicators of economic health and trends is the Institute of Supply Management’s Manufacturing Purchasing Managers Index (PMI). The chart below details the results of this bi-monthly survey over the last five years through mid-August. Numbers above 50 indicate expansion.

A look at 50 countries around the globe (including the US) finds that similar indexes in 27 other countries are at 50 or higher through July/August and that only three in the entire group showed net contraction over the past three months.[1] The global economy is in strong, spreading re-expansion.

There are other indicators that support the data in the PMI chart. For example, US new orders for Durable Goods (products designed to last at least 3 years) jumped 12.5% (11.7% seasonally adjusted) in July, the most recent data available.[2] The five-year chart below shows that orders are now within roughly 10% of the September 2018 peak. Values are in millions of dollars. 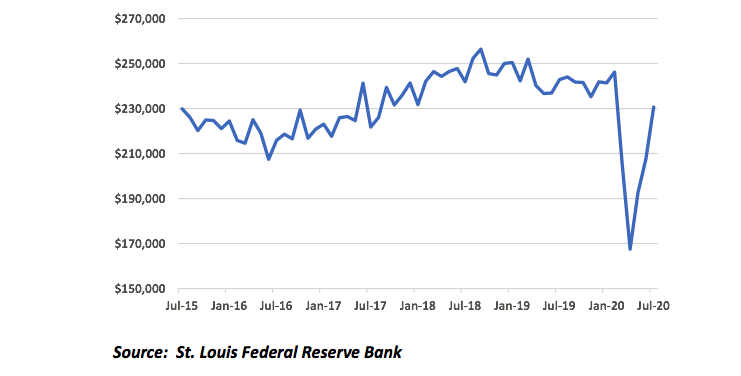 The most important takeaway from these indicators is that the pace of domestic manufacturing activity is in a rapid uptrend, supported by robust growth in orders for big ticket consumer and business goods. The economy is rebounding faster than even the most sanguine experts predicted as recently as two months ago.

In our post earlier this month, we noted an apparent and somewhat confusing impasse in talks surrounding a bilateral treaty to govern US/UK trade post-Brexit. The obstacles identified were primarily agriculture and tax related.

The Wall Street Journal published a Letter to the Editor from Britain’s lead negotiator responding to the article we cited. He challenged, among other issues, implications that the UK’s intransigence is evidence of lackluster enthusiasm to reach agreement until the US Presidential election is resolved.

We noted that the US is not entirely free from criticism in the process so we thought it would be informative to include below the correspondence from Mr. Antony Phillipson, UK Trade Commissioner for North America.

"We, and the U.S., remain committed to an ambitious agreement. This involves complex, wide-ranging issues. Covid-19 means we are negotiating virtually. But over three rounds, and 30 sessions in between, we have exchanged text in areas including intellectual property and rules of origin, and reached broad agreement on a small and medium-sized enterprises chapter, which will benefit the businesses at the heart of our communities.

We know agriculture matters to the U.S. It matters to us, too, as does our right to establish new regulations outside the European Union. But this is about more than chicken and beef. We want to create opportunities for producers and consumers in both countries.

We have always been clear that the National Health Service is off the table. President Trump has acknowledged this, so it should not be a barrier to progress.

We are aware of U.S. concerns about our Digital Services Tax. We want digital businesses to pay tax in the U.K. reflecting value derived in the U.K. We hope to agree on a global solution in the OECD.

U.S. tariffs on U.K. steel, aluminium, and significant exports like Scotch whisky raise prices for U.S. consumers and are an unhelpful backdrop to negotiations. We are pushing for a settlement to the Airbus-Boeing disputes and removal of all retaliatory tariffs.

Finally, the U.S. election is a matter for the American people. We will continue to pursue a deal that boosts jobs and growth in both countries and help us rebound from Covid-19. We will negotiate hard, to that end."

As is often the case when focusing on one side’s point of view in a negotiation, areas of agreement and willingness to compromise, by both parties, may be obscured or overlooked. The intent of the talks is to reach a good faith meeting of the minds within the constraints of several non-negotiable items. Undoubtedly, a deal is within grasp, which will inure to the benefit of all.

The traditional late summer doldrums are evident in volume statistics on the stock exchanges. Average trading volume on the NYSE has shrunk to an average of about 3.75 billion shares per day over the past three weeks. Additionally, intraday sharp, sudden upswings and downdrafts have been notably absent.

From late February through mid-May, volumes were routinely 6-7 billion shares per session with the 2020 peak over 9 billion shares on March 20. Nevertheless, despite diminishing buy/sell intensity, the uptrend in prices has remained intact.

The pace of candidates’ and surrogates’ speeches as well as media advertising by the campaigns and myriad interest groups will multiply exponentially as the traditional Labor Day kickoff of the final run to Election Day approaches. Barring unexpected events, politics will crowd out most other news in the population’s attention span.

We expect stark delineation of competing policy proposals and overall visions for the country to crystalize in voter perceptions over the next two months. Investors will be wary of any suggestion that higher taxes and more widespread regulations are coming and anxious to hear how both candidates plan to address and/or quell the ongoing civil unrest in numerous cities.

Any reasonably astute observer of American politics understands that merely a week is a “lifetime” in a Presidential race. The upcoming season will be full of surprises and shifting trends. It will likely be a wild ride to November.