Global equity prices were widely mixed in August. In broad terms, large-capitalization growth stocks continued their year-long uptrend but other asset classes, especially small capitalization, and value issues, clearly lagged. Emerging Markets have, so far, been notably weak for the quarter. Developing market indexes showed modest strength in August, but as has been the case throughout 2021, domestic markets have produced the most substantial gains. Key equity benchmark performance for the periods indicated are illustrated below.

It is informative to note that the FTSE All-Share index has outperformed the MSCI EAFE Index of Developed Markets in all three above-listed time frames as the economic transition precipitated by Brexit continues to benefit UK shares. Britain is one of our largest trading partners and we retain an ongoing interest in the UK’s stock market performance.

Fed Chairman Powell has confirmed all but the date that the central bank will begin reducing its ongoing $120 billion/month open bond market purchases. What has not been revealed, however, is the magnitude of the initial reduction or specificity on a “glide path” schedule to completely eliminate the program. Bond prices have been under modest pressure over the past two weeks after unwinding short positions propelled quotes sharply higher in late July and early August.

Counterintuitively, Treasury market yields are currently lower for the quarter. Several large European countries retain negative interest rates in their short and intermediate-term sovereign debt instruments, so there is no dearth of demand for US Treasury bonds, even as investors prepare for the Fed to power down its open market activity. US Treasury yields on June 30, 2021, and August 31, 2021, are below.

A year-long irregular uptrend in the US Dollar’s value against a basket of world currencies suggests the return disparities between the US and several other Developed countries’ yield curves is helping to drive fund flows into the greenback.

A strong dollar is a plus for consumers. Rising value reduces import costs and could help moderate inflationary pressure from supply chains struggling to meet surging consumer demand. The US Dollar Index from December 31, 2020, through September 7, is shown below. 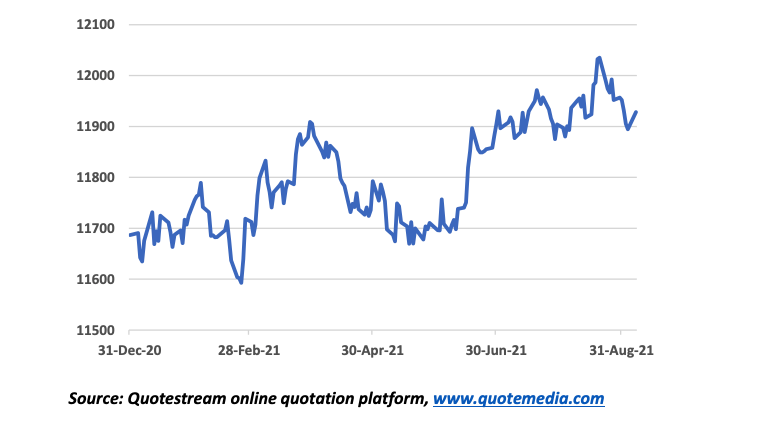 Mr. Powell’s term as Chairman of the Federal Reserve ends next February but if he is to be replaced by the Biden Administration, a decision will be necessary in the very near future to provide the Senate sufficient time to evaluate a successor.

The Progressive wing of his party is urging President Biden to dump Powell for a leader more acquiescent to funding unrestricted deficit spending, in favor of using the Fed to promote social change, and to shape monetary policy with a supplemental goal of combating climate change.

While Powell has facilitated the expansion of pandemic-related spending, his determination to begin reining in dollar creation, diminish runaway money supply growth, and adamant refusal to allow the bank to become a tool for social engineering has created opposition to his renomination from the far left.

In the very near future, Congress will resume deliberation on the $1.5 trillion bipartisan infrastructure bill and a $3.2 trillion social infrastructure package. Moderate Senate Democrats are continuing to sound as if they are opposed to the proposed level of new spending in both bills but posturing against tax increases and spending could be little more than an attempt to exert leverage over the process and final content.

Senators Manchin (D-WV) and Sinema (D-AZ) have repeatedly expressed concerns with myriad provisions of pending legislation. Mr. Manchin has gone so far as to pen an editorial listing his objections and suggesting a “strategic pause” by Congress to evaluate whether there is true need for much of the appropriations that would result from the bills’ passage.

There is certainly a discernible logic to this resistance. Inflation is already creating an effective consumer tax increase, particularly from rising energy and food costs. If higher taxes are piled on top of these increasing basic expenses, the possibility that consumer spending will contract precipitously exists, with obvious negative economic connotations.

Mr. Manchin’s call for a pause before throwing more money at a reasonably healthy economy, accompanied by tax increases, makes economic sense. But uncomfortable or unpopular decisions about events in the future are not easy to make, as many of us may have learned in Psych 101 college courses.

As the deadline for action approaches in a month or more, it is reasonable to speculate that convictions may not remain as firm as today’s opinions suggest. Pressure from leadership and the White House, coupled with “bonus” provisions for a Senator’s home state can sway even the most principled opposition.

In our view, meaningful tax increases are ahead. Only the magnitude remains unknown. Changes in the tax code will create or eliminate incentives for individual and corporate behavior, which in turn, will influence equity performance. Until specific initiatives are known, however, we suspect investors will remain more focused on strong corporate earnings and a recovering economy.

[2] “Delta variant or no, the manufacturing demand crunch won't let up,’ www.finance.yahoo.com, September 2, 2021.