December capped a strong 2020 fourth quarter performance by both domestic and global equities.  At the close of business December 31, most US benchmark indexes were at their highest levels of the year, many of which were all-time highs.  While the upsurge that began from the March 23 lows had been led by and largely confined to Large Capitalization issues through the summer and early fall, especially the tech heavy NASDAQ Comp, the rally broadened in the fourth quarter as Small Capitalization and to a lesser extent, Value asset classes began to outperform the overall market.

A persistent downtrend in the relative value of the US dollar against other major currencies helped to boost the performance of International Developed and Emerging Markets equities as well as commodities.  The slide began in the wake of a flight to quality during the February-March equity selloff and reached its lowest level as 2020 ended.  Performance of key global and domestic equity benchmark indexes are shown below.

Two figures stand out, aside from the NASDAQ Comp, which had a remarkable gain for the year.  The Q4 (and 2020) return for the Russell 2000, which tracks Small Capitalization equities, and the annual loss for the FTSE, a proxy for UK equities, were both notable.

We won’t postulate underlying reasons for the Russell’s sudden improved relative performance after multiple years lagging the Large Cap S&P 500. But we will observe that, historically, smaller company equities have performed better on an average annual basis than large company stocks, despite extended periods of frustrating underperformance.

Whether the multi-year return deficit will continue to correct over the coming months is unknowable, but we can assert that strength in this less visible sector of the equity markets indicates underlying health in the US economy that is not limited to the handful of companies that “wag the dog” in the NASDAQ Comp and to a lesser but still significant degree, the S&P 500.

Suffice to say that investors who positioned their portfolios with the expectation that historical performance premiums for Small Capitalization equities would eventually reappear are likely relieved to finally see that expectation beginning to be justified.

Britain’s economy was crippled by lockdowns earlier this year, to a far greater extent than the US.  In recent days, detection of a mutated strain of Covid-19, which is estimated to be substantially more contagious than the original, prompted PM Johnson to impose a new shutdown through mid-February.[1]

Large segments of the British urban population will be subject to more stringent contact regulation, limiting person to person gatherings to no more than two individuals.[2]  Protests have been occurring, but authorities have quickly dispersed crowds that violate public health related rules.[3]

On December 31, the UK finalized the terms of Brexit, an event that was presaged with optimism evidenced by the FTSE 100’s strong fourth quarter performance.  Some areas of EU control remain, especially over British waters fishing rights, but on balance, four and a half years after the referendum to leave passed, British sovereignty has been reestablished for the first time in over 45 years.

Questions remain about the future of the UK itself, since Scots were strongly opposed to Brexit.  Recent polls suggest that Scotland would vote to secede from the UK if a referendum were held.[4]  Scottish armed forces comprise a significant portion of the UK’s NATO contingent.  Long standing Scottish opposition to the existence and potential use of nuclear weapons among Scots could undermine the alliance should Scotland’s independence become a reality.[5]

UK investors, however, appear to be focusing on expanded markets for British exporters and the Government’s new authority to structure bilateral trade relationships with important partners such as the US. Without the EU looking over its figurative shoulder or wielding veto power over proposed agreements, investors are concentrating on the positives that can well result from an end to EU membership.

Credit markets remained placid at levels largely intact since early March during the fourth quarter.  There was, however, a modest upward drift in intermediate and longer term yields.  The Federal Reserve’s outlook for the economy remained guarded during the quarter, but as we have often noted, Fed policy is largely reactive to statistical data rather than predictive.

After the Fed’s Open Market Committee December meeting, Chairman Powell reiterated previous guidance centering on extending an aggressively accommodative stance for the foreseeable future and the continuation of asset purchases to promote liquidity in the bond markets.  Inflation remains a secondary concern.  The Fed’s main stated goals are to facilitate the ongoing economic recovery and to support a return to full employment.[6]

One casualty of the Fed’s accommodative policy has been the dollar.  Low short term interest rates coupled with massive fiscal stimulus spending in 2020 have diminished demand for greenbacks and increased supply.

However, the selloff can reasonably be expected to have little impact on consumer prices outside nominal import cost increases.  The Dow Jones US Dollar Index current value is roughly equivalent to its 2018 lows.

A fourth quarter surge in commodity prices, most of which are dollar-denominated, if persistent, could begin to impact production costs during the second quarter of 2021.  If the dollar continues to lose relative purchasing power, the price of raw materials traded in dollars will necessarily rise, assuming relatively stable supply/demand levels.  Recovering global economic growth (demand) has accentuated dollar related price increases. The DJ US Dollar Index from December 31, 2017 through January 6, 2021 is below.

The final piece of the 2020 quadrennial election has now fallen into place.  The runoff for two Senate seats in Georgia occurred on January 5 and both Republican incumbents lost, flipping the Senate to Democrat control.

As we have discussed over the past few months, unified government could provide an opportunity for Democrats to enact legislation to alter the rules of the Senate and the composition of the Supreme Court.  Whether Democrats in the Senate remain in lockstep with their leadership in a 50-50 environment (with ties broken by the Vice President) remains to be seen.  One possible side effect may be an increase in leverage to influence bills for moderates in both parties.

One final thought.  To those concerned that legislation from the 177th Congress could negatively impact equity markets, the chart below may mitigate consternation.  As we have illustrated previously, the party holding the Presidency has not significantly affected the long term trend of equity prices.  The chart below overlays the hypothetical growth of $1 invested in the S&P 500 from 1926 through 2019 on concurrent Congressional control.  Markets have almost always had an uncanny knack of acclimating to shifting political winds. 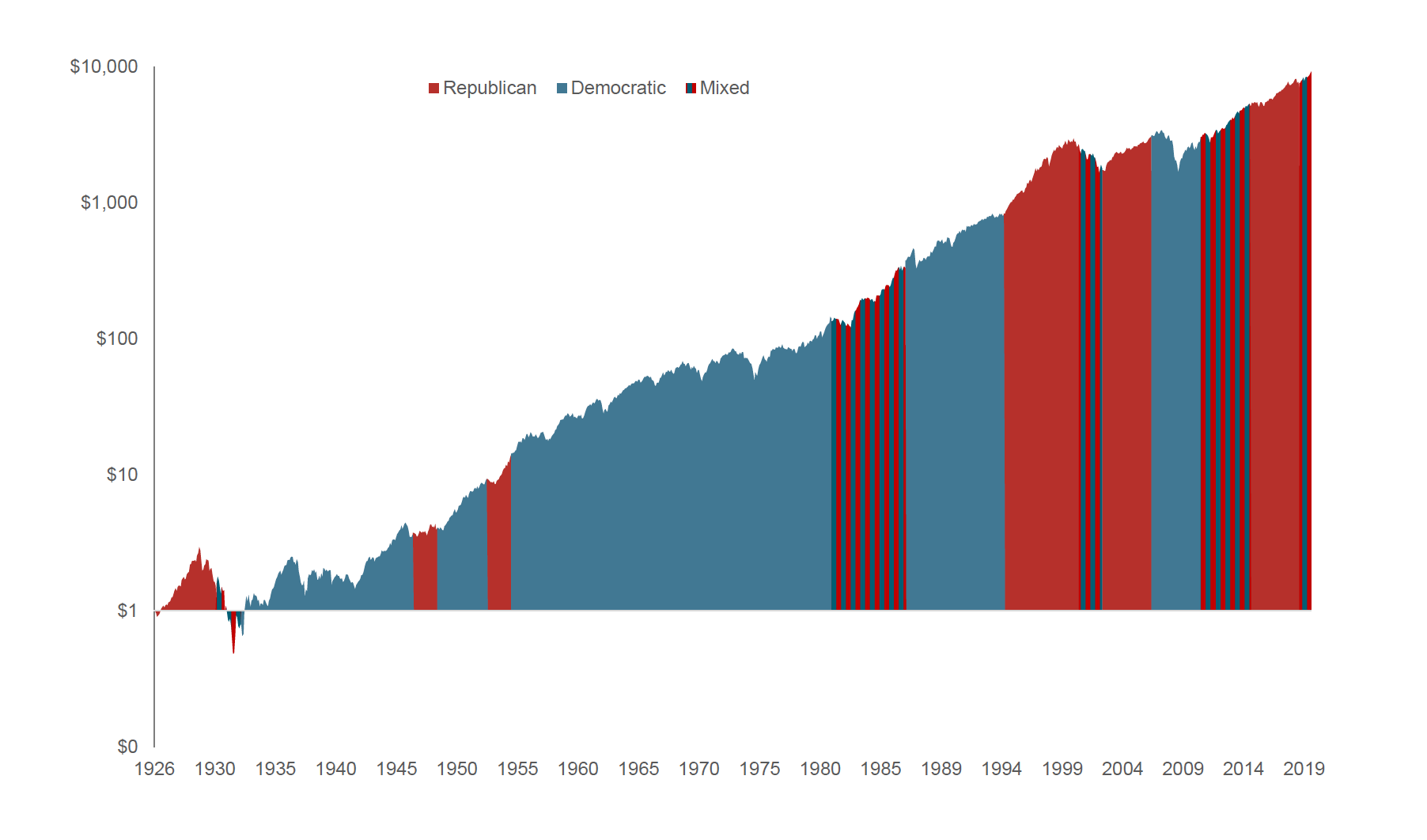