A Call for Help

This came into my inbox earlier today, and I'm sharing it with you as I think it merits reading.  It's a post by Scott Galloway, Professor of Marketing at NYU's Stern School of Business, writer, and serial entrepreneur.

I hope you find it informative, and have a great weekend!

The 10th of May, 1940. The leaders of Britain and France watch an unfolding disaster in the East, as Hitler’s forces infect a host of weaker nations. Still, the Allies feel confident. They are wealthy, innovative…exceptional.

That morning, the Germans attack. They sweep south, bypassing France’s famed Maginot line and traversing the Ardennes Forest. They rout the Allies in a lightning assault and drive the retreating army up the Somme Valley, toward the English Channel. Within two weeks, the French Army has fled to the west, the Germans own the skies, and 400,000 British Expeditionary Force troops are stranded on a sliver of the French coast, Dunkirk.

Pinned down and facing annihilation, the BEF commander sends a messenger to London. The junior officer pleads with the War Cabinet: "You must send pleasure steamers, coasters, fishing boats, lifeboats, yachts, motorboats, everything that can cross the Channel."

A call goes out.

The response of the British people has become legend. Captains of every type of ship, from river barges to fishing trawlers, sailed south into the teeth of German artillery and air power to rescue their countrymen. Over the next ten days, the British mounted a chaotic, impossible rescue. They saved 340,000 soldiers, including every surviving British soldier in the city. The first Allied-German battle of World War II was a colossal disaster for the Allies: France fell in less than a month, and had Britain lost the men at Dunkirk, it likely would have sought a settlement. Instead, the sacrifice and selflessness of the British people changed the course of history.

January 2020. America too looked east with confidence. A virus had emerged in China, and was invading weaker nations, but America was exceptional. We had the world’s finest health care system, the most brilliant scientists, and the Centers for Disease Control was the gold standard for public health institutions.

Then, the virus attacked. Like an invading army, it evaded nearly every defense erected to slow its relentless march. For almost a year now, we have been retreating. The enemy has exposed our institutions as weak and ineffective, and preyed on a deadly comorbidity: the notion that individual liberty trumps collective sacrifice.

The virus has driven us not to a beach, but into our own homes and, more dangerously, into separate spheres of differing truths. The daily death toll has crossed 3,000, hospitals are reaching capacity, and more than one million people contract the virus every week. By late January 2021, the virus will have killed more Americans than died fighting in World War II. 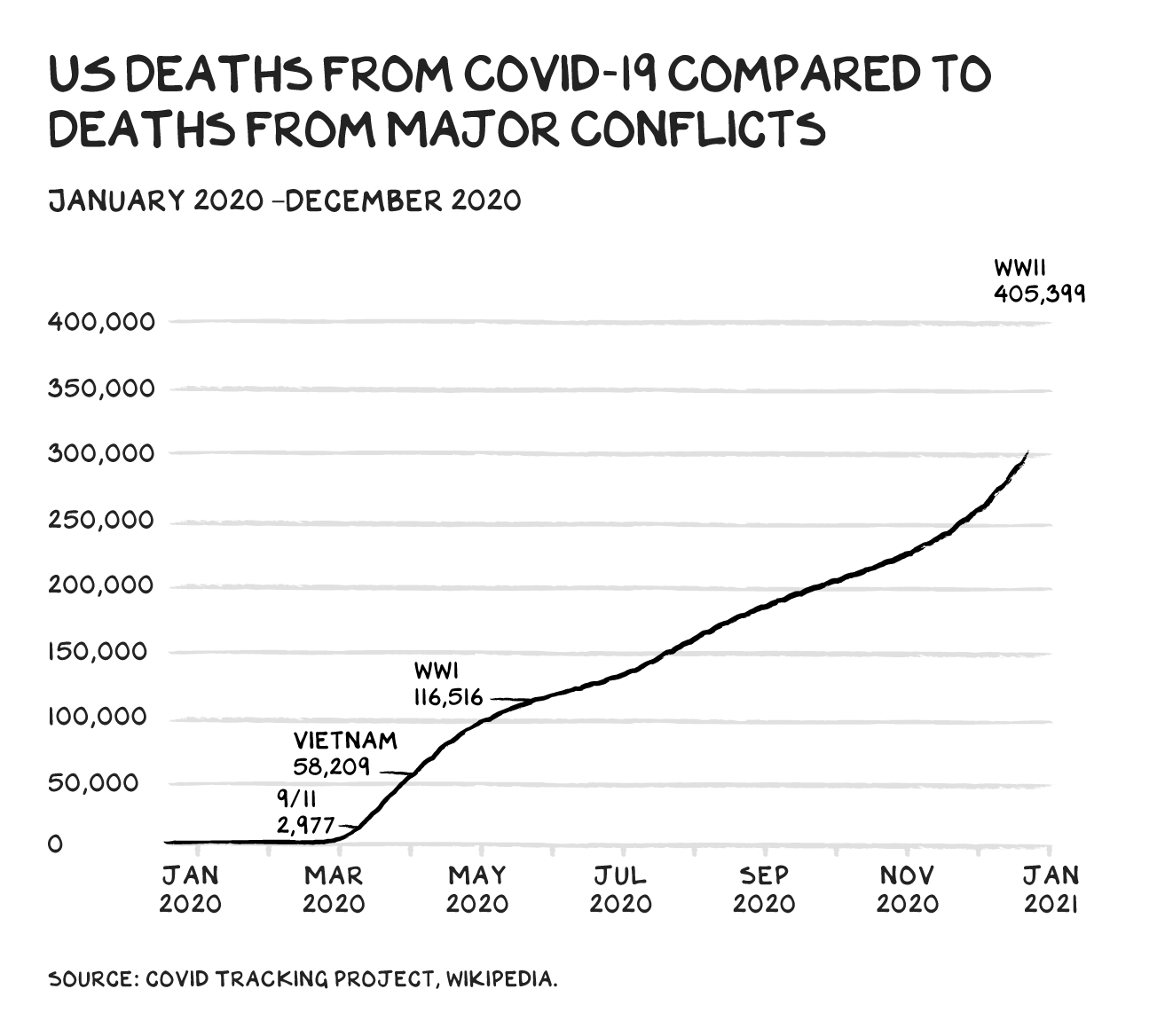 Covid is a web of death and disability sweeping across the country. Some days it claims 2,000 people, some days 3,000. But every day, it kills fathers and mothers, school teachers and accountants. Each newly infected person adds a fiber, making the web finer and deadlier.

What We Must Do

What we can do — what every one of us must do — is avoid becoming a fiber in that web. To date, we have not done a good job of this. Millions of us, from the President of the United States down, have refused to acknowledge the gravity of the threat and continue to cling to some perverted notion of "liberty." And every day, we add 200,000 more fibers.

How many Americans will be snared? If the virus is left to run its course, it could infect over 200 million more people in the US before herd immunity suppresses the spread. If the mortality rate is 1%, that puts two million people on the beach, pinned down by the enemy, facing death.

But these people don’t have to die. There is a way out. We have vaccines: two in use, a third expected soon, and more on the way. However, vaccines don’t save lives — vaccinations do.

A call has gone out.

Will we answer it? Huge numbers of Americans are saying they will not. In poll after poll, nearly half of Americans say they are unlikely to get the vaccine.

These days, I’m used to reading polls illuminating that half of America has its head up its ass. What’s particularly distressing about the refusal to get the vaccine is that I don’t have to read polls to hear it. I hear it from friends, from business associates, from parents at my kids’ soccer league: "We’re going to wait, to ensure it’s safe."

While it is true that these vaccines have been developed in record time, they are hardly untested. The Pfizer vaccine, the first to be approved by the FDA, was tested on 18,198 people; the Moderna vaccine was tested on 15,200 people. Around half of the recipients reported fatigue or chills, and one in seven reported a 24-hour fever. No serious side effects were identified in any recipient, and recipients who felt ill nonetheless said they were glad to have gotten the vaccine. Vaccines are one of humanity’s greatest accomplishments, and they are incredibly safe. Fun fact: you are far more likely to be killed by a dog than by a vaccine. Thanks to vaccines, diseases like measles and smallpox, which once killed hundreds of thousands of Americans per year, are rare or unheard of today. 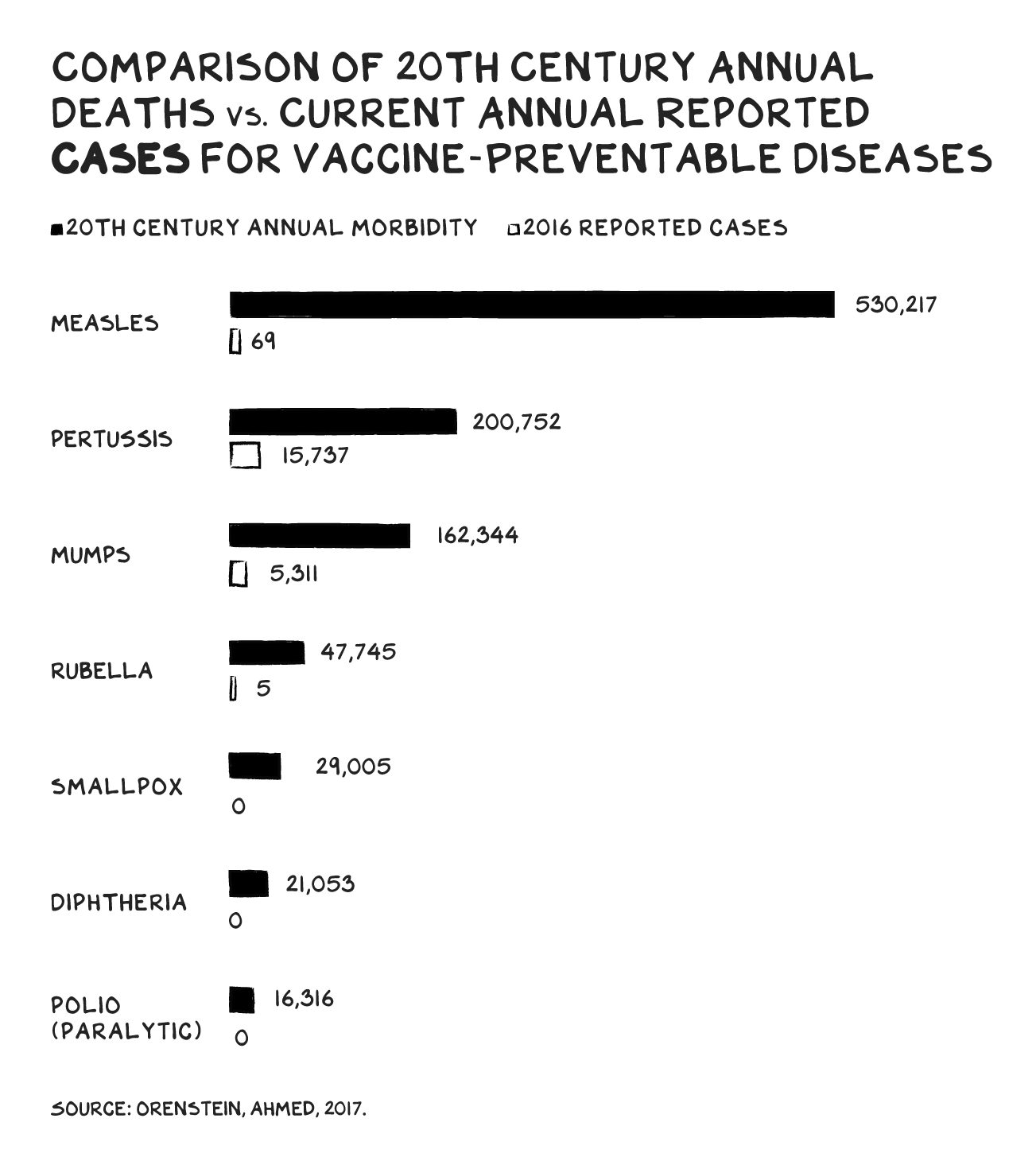 In hindsight, calling the effort to procure a vaccine "Operation Warp Speed" may not have been the best way to build confidence in the final product. But the swiftness with which the vaccines have been developed is less a reflection of haste than of commitment, resources, and new technology.

As of mid-December, scientists had published 74,000 papers related to a virus that nobody had heard of 12 months earlier. Nearly one-third of all scientific researchers around the world have dropped their prior projects and are working on Covid-related matters. As Ed Yong recently described in The Atlantic, this pivot is far beyond any historical precedent, and will have profound effects on the scientific community for years to come.

The speed of clinical trials can also be attributed to the virus’s very virulence, as it takes so little time for the control group to suffer a statistically significant number of infections. Johnson & Johnson recently cut the size of its Phase 3 trial because infection rates are so high in the United States.

We moved fast because we had to, and because we could. These vaccines benefited enormously from advances in technology, data mining, and data modeling.

The technology behind the Pfizer and Moderna vaccines, which has been in development for decades, has also enabled these vaccines to reach us quickly. This novel deployment of messenger RNA should also quell a common concern about vaccines: that they inject a modified form of the virus itself into the recipient. Instead, mRNA vaccines provide the "instructions" our immune system needs to identify and defeat the virus. They do not alter the DNA in our cells. (If my scientific expertise is not reassuring on this point, vaccines based on traditional approaches are also in development.)

Still, though, I hear friends and colleagues say, "Even if the risk is tiny, why take it? I’m not at risk from Covid." But the risk of suffering serious health effects from Covid, even for younger people in good health, is real. In July, the death rate among adults 25-44 was nearly 50% higher than in July 2019 — that’s an additional 5,000 deaths attributed to Covid, among younger people, in just one month. Even among survivors, the virus has been shown to cause long term neurological and cardiac harm in 10% of victims. Yes, the risk is small. But it is far greater than the risk presented by the vaccine.

In May of 1940, the British sailors and bargemen who set course for France did not know if U-boats, bombers, or bad weather would await them. They didn’t need to know. They knew their countrymen were at risk, and that was enough.

Today, it feels as if we’ve lost sight of the connection between sacrifice on behalf of our country and the personal prosperity and liberties we are blessed with. But we’d do well to remember that they weren’t really blessed upon us — they were earned. 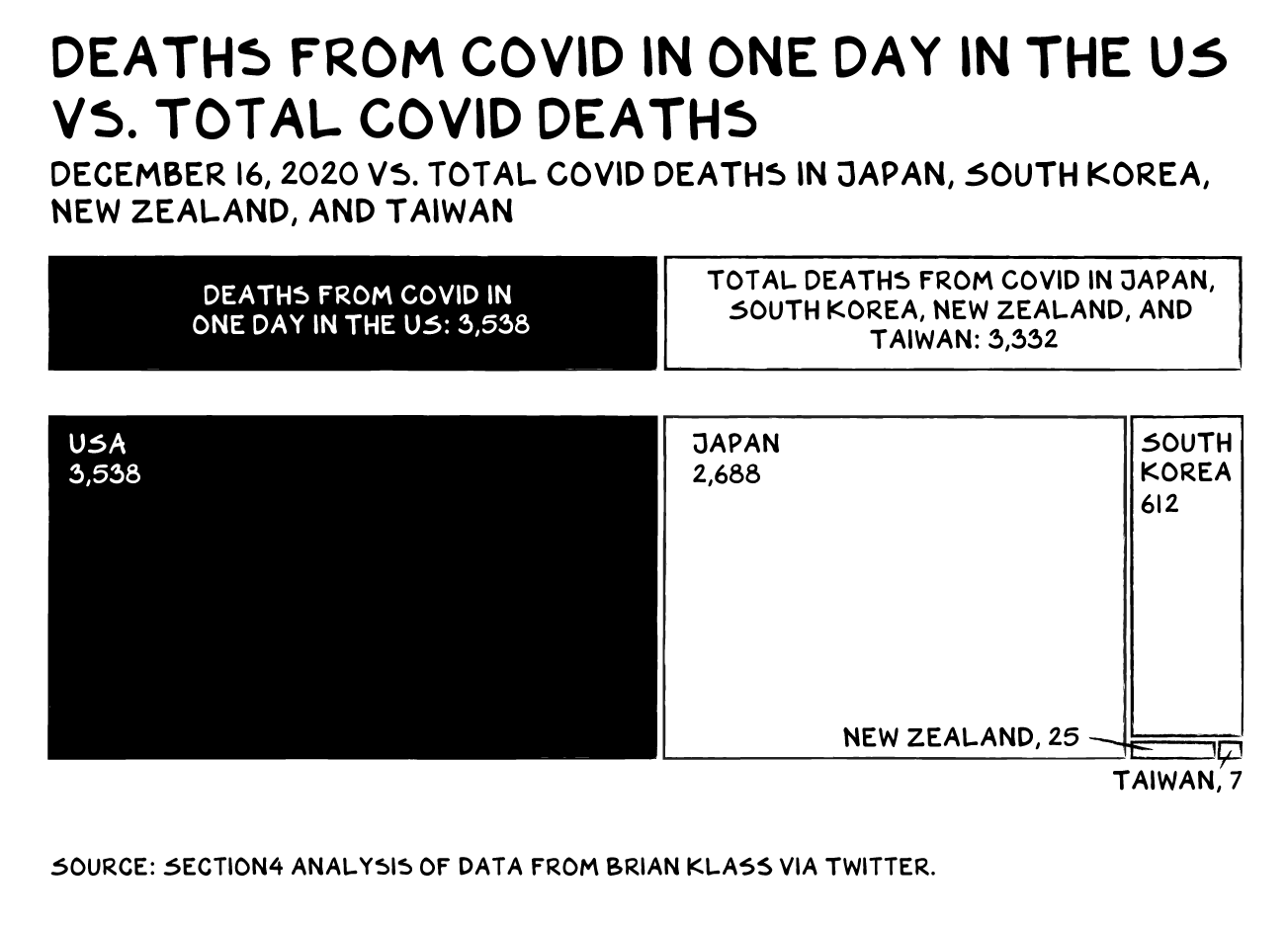 Our nation has been frayed, if not torn apart. A key component of our repair will be a renewed belief that there is a truth — one based not on ideology or opinion, but on data and science.

This vaccine is our generation’s call. Let’s answer the call. Let’s get two million fellow Americans off this beach.

Life is so rich,

You can subscribe to Scott's interesting and provocative blog posts here:  No Mercy / No Malice.