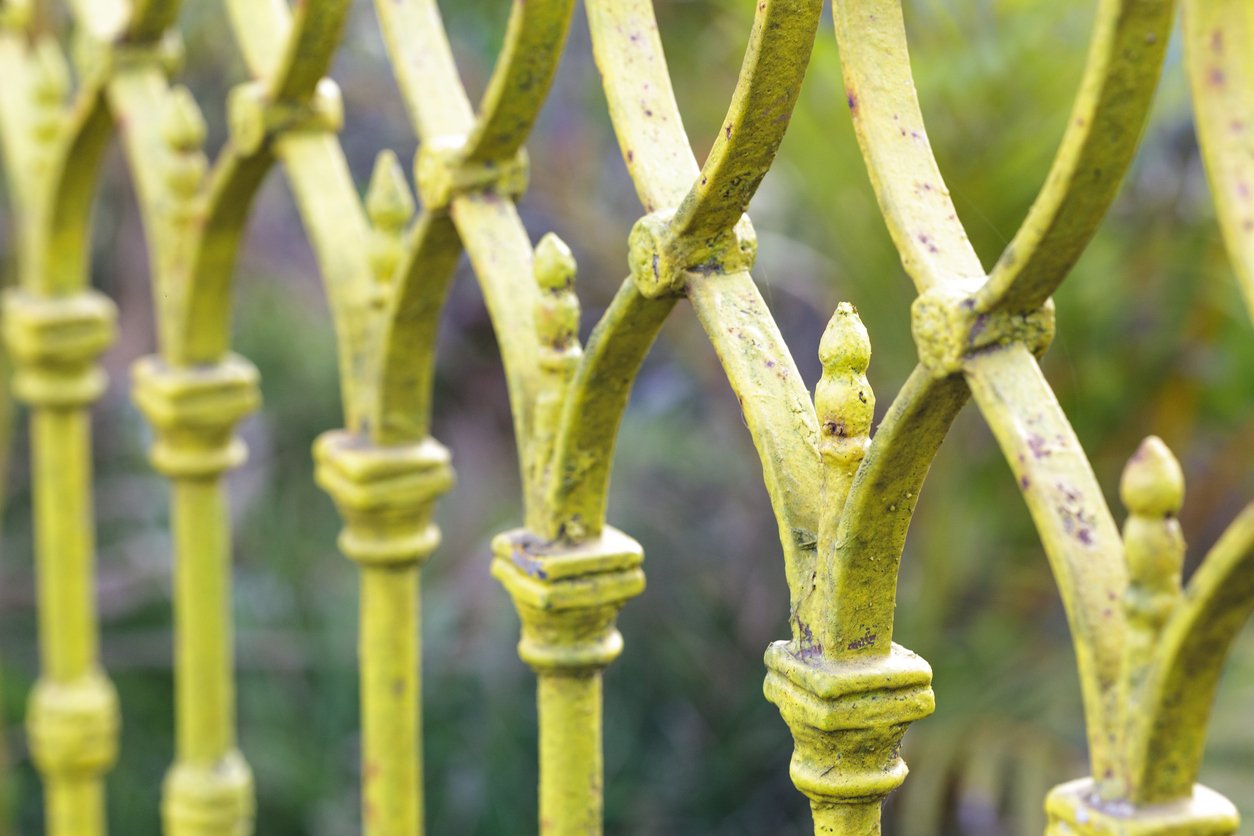 President Trump’s address to the nation Wednesday evening was somber and determined. While it evidenced a commitment to ensure the safety of US, the announcement that travel restrictions have been extended to all of Europe was yet another body blow to the equity markets. This morning, European bourses are off more than 7% and US futures are at their limit of down 5% as of about 30 minutes before trading opens in New York.

Yesterday morning, the Governor of New York, Mr. Cuomo, announced that an exclusion zone has been created around New Rochelle, a suburb of New York. This action marks an escalation of efforts to contain the domestic spread of Coronavirus, which has continued to expand its geographic footprint across the country during the past week. We fully expect, based on guidance from the CDC and other government epidemiology experts, that New Rochelle will likely not be the last enclave to be similarly affected.

It has been clear that world economic activity is headed for significant disruption since China imposed widespread quarantines last month. The equity markets have been reacting in real time to new virus related developments, which appear daily. The disease continues to spread rapidly across open borders in Europe, which compelled the President to issue the travel restriction last night, joining existing prohibitions on flights from China, Italy, Iran and South Korea. We can expect additional reactions from US leadership restricting contact with other countries or regions, if needed.

Markets are struggling to quantify the effects of diminished and diminishing global interaction on trade and corporate profits. The problem investors are facing in this process is the daily revelation of new negatives, now exacerbated by travel restrictions. The Vice President’s task force has made abundantly clear that US citizens should be prepared for continued spread of infections and a significant increase in the number of individuals afflicted.

An oil price war with Russia was suddenly instigated by Saudi Arabia over the past weekend and has further complicated an already tumultuous world economic situation. Wednesday, the Saudis announced an increase in their production to 13 million barrels/day from a previous level of approximately 10 million. Russia countered by committing to increase its output by 500,000 barrels/day.[1] Coupled with an already reeling global economy, a one day 25% drop in oil prices this week was an unexpected shock.

For consumers, lower energy prices are a silver lining, but are unlikely to assuage worries about the state of their investments. A new problem created for the US by this development is the tenuous position of many highly leveraged fracking companies, which will not be profitable with West Texas Intermediate oil prices near $30/barrel.[2] Bankruptcies in this industry would quickly cripple banks heavily loaned out in the sector. The chart below of current month futures closes illustrates the rapid drop of crude prices since mid-January. 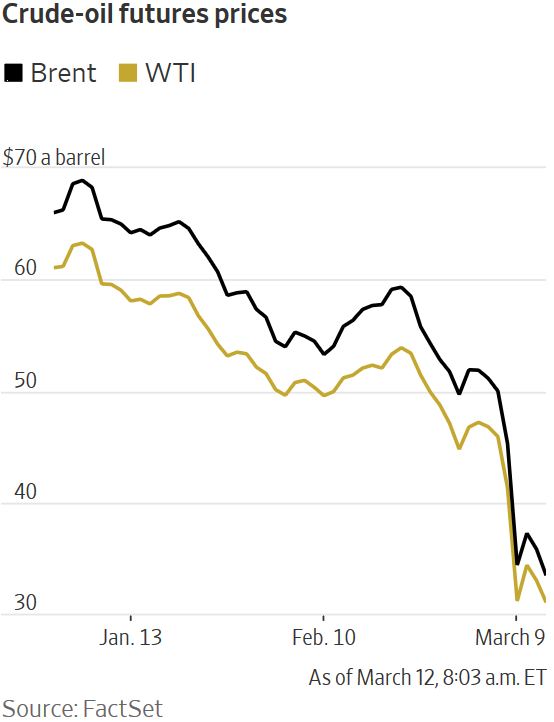 While large banks remain well capitalized and the Federal Reserve has given ample and forthright assurance that system liquidity is a priority,[3] regional banks may be at significant risk of failure should crude prices remain depressed and a waterfall of bankruptcies in the energy industry begin to emerge.

An almost inescapable conclusion at this juncture is that equities have entered a global bear market, sparked by diminishing contact between trading partners and supply line interruptions. It is impossible to know how long or how deep the current drop in values will extend.

There is a psychology to bear markets, which is the mirror image of a bull market. The initial stage is the abandonment of positive outlooks, which has clearly occurred. The second stage, which we submit is our present position, is the negative reaction of prices to a parade of dispiriting news. The third stage is a final wringing out of liquidity from prices by distress sellers followed by a general failure of prices to respond further to ongoing negative news. Final stages are often accompanied by sentiment that future market gains are unlikely, which of course, is a mindset rather than reality.

It is important to remember that equity markets are preeminent discounters of future investment cash flows and that prices reflect expectations even more than concurrent developments. At some unknowable point, the spread of the Coronavirus will either be controlled or diminish on its own. But the process of rebuilding and/or relocating supply lines as well as the recovery of industries such as airlines and other travel and leisure companies will take time.

In the credit markets, another troubling situation has emerged. Yields have not only dropped significantly as we noted in our February 24 comments, but have remained essentially pinned near historic lows. Equity sellers have been piling generated cash into Treasury instruments in a flight to perceived safety.

The 30-year bond yield dipped briefly below 1% earlier this week, an astonishing number. Over the past two days, the yield has rebounded to roughly 1.1% to 1.2%, but the compression of spreads between short and long term rates is threat to bank profitability.

The Fed’s announced commitment to providing adequate liquidity is a welcome “finger in the dike” but like the Quantitative Easing programs of 2009-2014, will not restore bank profitability over the intermediate term. It is a given in the futures markets that another cut in the Fed Funds rate to a range of at least .50%-.75% will be implemented shortly, however this move is only following market changes already in place.

One month ago, many broad-based US equity benchmarks were posting new all time highs. The ensuing selloff has been dramatic, but not unprecedented. A similar decline occurred in the final quarter of 2018, culminating on Christmas Eve amid fears of a trade war and rising short term interest rates. The current weakness could well extend further than that move as there are more fundamental economic dislocations at work in the global economy this time.

As of yesterday’s close, only two indexes have broken below their December 2018 lows, the Dow Transportation Average and the Russell 2000. Transportation companies are among the hardest hit for obvious reasons and the small cap equities in the Russell 2000 are always subject to liquidity vulnerability during periods of heavy selling. Additional 2018 index lows will almost certainly be tested today.

Investors are enduring an extremely uncomfortable situation that has now lasted more than three weeks with only sporadic relief. Risk tolerances are being stress tested daily. How low prices go or how long the current discounting persists unfortunately cannot be predicted. What we do know is that until some indication that the isolation of regions of the globe from others will be relaxed, a resumption of meaningful growth will be unlikely.

Price declines represent the risk of owning equities. It would be foolish to abandon positions after a better than 20% decline by major equity benchmarks. The severity and rapidity with which markets have declined will eventually be followed by an equally sharp initial recovery. Attempting to avoid further losses by exiting amidst chaos is likely to ensure that the inevitable bounce and perhaps the longer term recovery, will be missed. Replacing the anxiety of ongoing declines with that of picking a reentry point is a counterproductive strategy. The virus will pass, the discounting of negative economic impacts will be complete and as borders reopen, economic growth will resume.