Global equity prices continued mostly higher over the past two weeks, building on strong third quarter gains. In the US, broad benchmark indexes are up roughly 4%-4½% through October 16. International Developed Markets have risen just under 3% for the period while Emerging Markets extended their persistent recovery, posting a 4.9% gain in the first half of October.

In the US, the Dow Jones Transportation Average is still exhibiting relative strength, which we interpret as an indication that the “lifeblood” of the economy is beginning to circulate again after the spring and early summer lockdown induced stasis. The Transports are up nearly 7% for the fourth quarter so far and are joined by the Dow Utility Average, trading up almost 9% since September 30. Both averages are sensitive to and reflective of the pace of economic activity and in our view, are signaling domestic expansion.

Most widely followed equity benchmarks are now showing solid gains for the year to date. The standout continues to be the NASDAQ Composite, which as of the October 16 close shows a yearly gain of more than 30%. 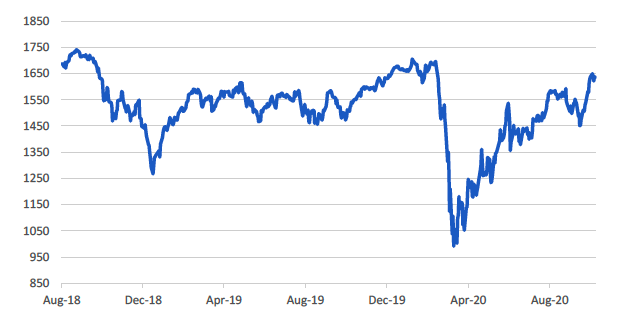 When states began shutting down their economies in late February, it was a given that economic statistics would deteriorate rapidly. The manifestation of these expectations was a 33.3% annualized decline in second quarter 2020 GDP. Any analysis of concurrent economic indicators as lockdowns proliferated was essentially a fruitless endeavor. What we sought was evidence of a trend reversal, which began to appear in April and May.

There is now distance from the bottom of the economic contraction and key indicators have resumed more normalized behavior. In fact, the US economy has rebounded faster than was predicted in the spring. The Federal Reserve Bank of Atlanta’s GDPNow “nowcasting” tool has projected a better than 30% annualized gain in third quarter GDP for more than two months. The most recent reading (October 16) is +35.2% (annualized).[1] The first official third quarter reading is set for October 29, but we don’t expect a significant difference above or below the GDPNow figure.

Fourth quarter growth will undeniably be significantly slower since third quarter results are largely making up for the second quarter’s decline. But forecasts from economists in early spring that suggested a flat (0%) fourth quarter annualized rate could well be low. Preliminary data for the current quarter are weeks away, but the key indicator table below suggests growth is ongoing through the end of September. Missing September indicator data are due late this month. 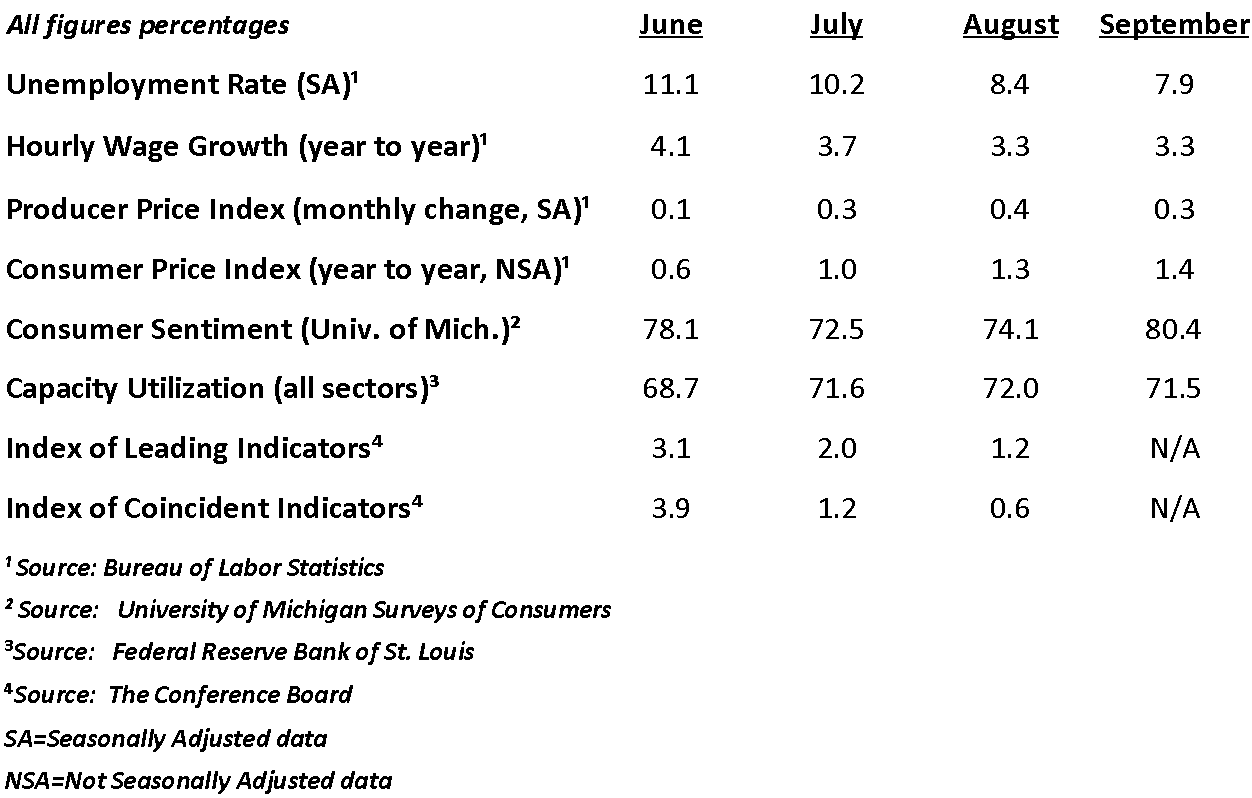 Articles have appeared in the press recently suggesting that the economy is slowing again and that the possibility of a “double-dip” recession lies ahead.[2] In our view, this is an overly pessimistic outlook and is based, in part, upon the assumption that a possible resurgence in Covid-19 infections would trigger new shutdowns. A contrary view is that President Trump’s quick recovery from the virus with the aid of an antibody “cocktail” is confirmation that effective therapeutic treatments exist and are becoming more widely available, which could mitigate any reinfection or new infection trend.[3]

Also cited as a risk is the stalemate in Congress over new stimulative spending, including more direct cash to citizens, supplemental unemployment insurance payments, and aid to state and local governments budgets hamstrung by lower tax revenues.

Fed Chairman Powell has called for more emergency spending to preserve the economy’s recovery.[4] Truly, we are in “interesting times” when the Federal Reserve is pleading with Congress to increase deficits.

Chairman Powell’s admonitions may ultimately prove correct, or not. Regardless, it is difficult to imagine a speedy compromise between Republicans and Democrats in the Senate, where a $2.2 trillion House bill is languishing. Majority Leader McConnell has scheduled a vote this week on a $500 billion Republican leadership backed bill, citing unspent and unallocated funds from previous cash infusions earlier this year as rationale for the sharply lower amount.[5]

It is difficult to imagine any reconciliation of these two figures with the election so near. Unless one party or the other determines it to be in its political best interests to compromise. President Trump has indicated a willingness to back a $1.8 trillion measure, but that figure is not currently supported by sufficient Senate Republicans to pass.[6]

Equity prices are retaining a positive bias as the election approaches. Historically, markets have prospered regardless of which party holds the White House. Despite polls indicating a coming Biden administration, we believe equity investors expect a Trump victory and a return to the strong growth experienced in 2017-19 sooner rather than later.

The Democrat platform of higher corporate and individual taxes, increasing government regulation and sweeping environmental legislation (the Green New Deal) stand in sharp contrast to Republican pledges to cut taxes further and to continue reducing the government’s footprint in the economy. Pockets of resistance to resuming full economic activity persist in several states, but as the statistical record indicates, overall, expansion is ongoing. Investors anxiously await the election’s outcome.

[2] “The Conference Board Economic Forecast for the US Economy,” www.conference-board.org, October 14, 2020.