Equity prices in the US have worked significantly higher over the first half of July. Volatility has increased a notch as successive days feature optimism about vaccines then pessimism as reported cases of Covid-19 surge seemingly uncontrollably in reopened states.

The constant buffeting by conflicting news items sweeping through the markets has masked a strong upsurge. Despite a series of sharply higher early openings that fade to nearly unchanged or lower by the close, investors continue to look forward to recovery and as earnings season gets underway, optimism is winning the battle.

The third quarter opened with technology issues extending their late June surge, propelling the NASDAQ Composite index to a series of new all-time highs in the first 10 days of July. In recent days, however, selling has capped this benchmark as investors turn their focus toward lagging sectors.

International and Emerging Markets issues, so far this quarter, remain solidly positive as well. The MSCI EAFE Index of Developed Markets is up 4.7% through the first half of the month and the MSCI Emerging Markets Index has jumped just over 7%.

Through July 15, the DJTMI has gained 4.1% from its June 30 close, which is in line with other broad domestic indexes, including the Comp, which has risen 4.9% over the same period. Closing prices for the DJTMI since December 31, 2019 are shown below.

As is so often the case, long term progress is built upon the back of short term volatility, an observation well indicated by the above. A raft of economic data is due in the second half of July that will chronicle the economy’s rate of recovery from an apparent trough in April. Similarly, second quarter earnings reports will be closely scrutinized for indications that the initial rebound of activity is more than a reflexive bounce. Judging by equity performance to date since the March 23 lows, investors are expecting good news on a variety of fronts.

Another recurring depressant for investors has been angry rhetoric exchanged by the US and China. President Trump has become increasingly strident with denunciations of China’s leadership for failing to apprise the world of Covid-19’s existence and characteristics in a timely fashion. China has responded by ratcheting up long standing regional conflicts such as a border dispute with India, threats aimed at Taiwan, and assertions of sovereignty over the South China Sea, an area considered international waters by the rest of the world.

In addition to starting “fires” in its neighborhood, Chinese implementation of the January Phase One trade agreement has failed to materialize to the extent expected and stipulated. US tariffs remain in place, which has kept pressure on the Chinese to live up to their commitments. If world recoveries begin to accelerate, we expect the Phase One agreement to become an increasing focus of contention.

Recent data show that China’s GDP returned to expansion in the second quarter (below). As in the US, however, whether this represents the beginning of a sustained trend or simply a bounce from a dismal Spring cannot be foreseen. It is likely that the US will show growth when numbers are published in the next week or so but remember that year over year growth will not necessarily be a signal that all is well. 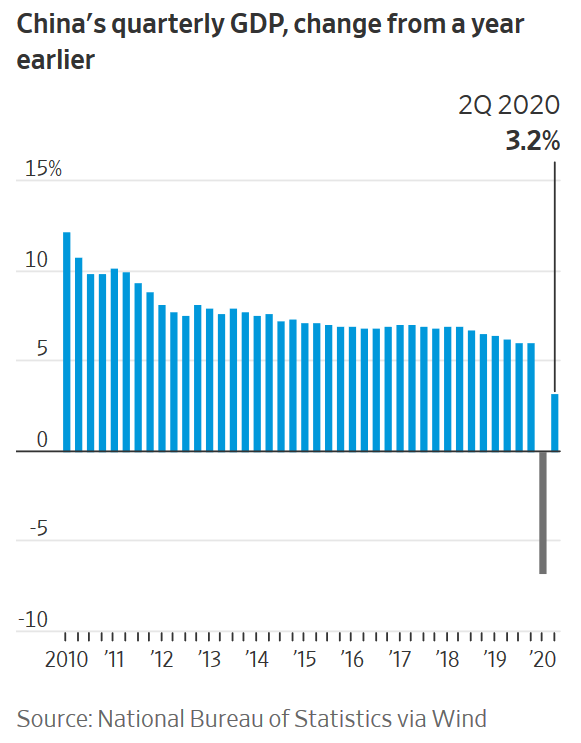 Other major economies are showing signs of life but not to the extent seen in China. Anemic rebounds by her trading partners would have a negative impact on China’s ability to continue to ramp up its export based economy.[1]

The second half of 2020 will provide more meaningful insight into the state of the world’s economy. China’s numbers must be viewed with a jaundiced eye as a state controlled economy may not be the best measure of world economic health. The International Monetary Fund is now predicting that China will expand 1.3% for 2020. The IMF has not listed any other major world economy is the plus column in its most recent outlook.[2]

Forecasts are instructive, but we prefer to view equity markets as the best predictors of future growth. The verdict in the US and elsewhere is cautiously optimistic. Broad US benchmarks are within striking distance of their all-time highs, but only the tech heavy NASDAQ has managed to punch through so far.

Last month, as Covid-19 cases began to accelerate wildly in several states, we researched Florida’s experience. It was clear then that increased testing of asymptomatic, younger individuals was the likely source of the upsurge in new cases and that further, while hospitalizations and fatalities had also turned higher, the positivity rate was not leading to a comparably higher death toll.

Over the past month, these trends in Florida have continued. Daily deaths reached a pandemic high of 132 on July 14, up from an average of around 45-50/day from mid-April though late June. The Florida Dept. of Health daily fatality statistics through July 15 are illustrated below. 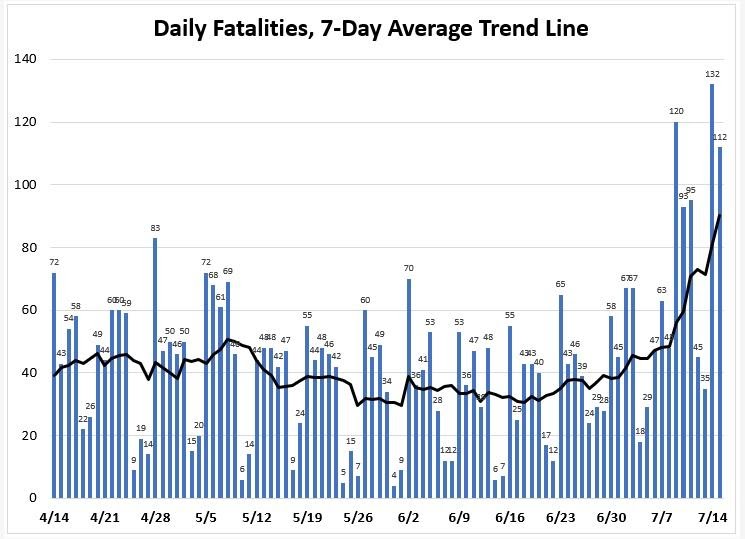 In the context of a 7-day average of reported new cases now above 10,000, the obvious question is whether there will be a further acceleration of fatalities. It is reasonable to expect such an outcome, but in the past 24 hours, a report examining Covid-19 test results from multiple labs in Orlando and other locations in Central and North Central Florida, has raised eyebrows.

Investigation by an Orlando TV station has revealed that, while the FL Dept of Health is measuring a statewide positivity test rate of 11%, in Orlando and surrounding areas, numerous labs are reporting positive results of from 89%-100%. When queried about these improbable results, labs almost uniformly indicated that “reporting errors” had occurred and that actual positive tests rates were about 1/10 of what had been publicly stated.[3]

Now, we’re not statisticians, but “no negative COVID-19 results” instead of, based on this reporting, roughly 90%+ negative results may be contributing to a sense that hospitalizations are about to overwhelm resources and ultimately lead to massive numbers of virus related deaths. The corrected data cited suggest otherwise and in fact, the failure of the fatality rate to soar over the past several weeks, tends to confirm this conclusion.

We feel confident asserting that a 90%-100% positivity rate in a random, widespread group of mostly asymptomatic individuals is a statistical impossibility.

The flow of earnings over the next several weeks will provide insight into how quickly businesses are recovering lost ground. Orders to slow or halt reopening in Texas and California are giving investors heartburn but equity prices have been exhibiting a decided upside bias.

We have no means to determine if the apparent irregularities noted above are isolated or more common but if the press focuses solely on new cases, headlines will continue to sow fear. The best defense is a long view, a coherent plan and reliance on the ability of markets to cut through the noise.