April provided relief for beleaguered investment portfolios, perhaps far more than would have been expected in the wake of the six-week decline that ended in late March. There was no relief evident in the economic statistics emanating from Washington, most very disconcerting, but none so much as the rapid accumulation of Unemployment Insurance claims. By month’s end, an estimated more than 20 million Americans had lost their jobs for an indeterminate length of time.[1]

But equity markets look ahead and despite the financial tragedies inflicted on businesses, families, and individuals across the nation by the shutdown, investors voting with their wallets may be signaling that the current deep economic malaise could be of relatively short duration.

Bull markets begin in the depths of pessimism and judging by headlines and the tenor of economic statistics, there is at present, no shortage of pessimism. Still, equities were strongly higher in April and clawed back significant portions of the six weeks of losses registered during the second half of February and most of March. April and YTD performance of key global benchmarks are detailed below.

Big Tech stocks in the NASDAQ Composite Index led the US market’s initial rebound in early April. In fact, the “Comp” had recovered virtually 100% of losses for the year by month’s end. The rally spread to less visible sectors as April progressed, including Value and Small Cap issues. The Russell 2000 Index of smaller companies was the second best performer last month, but even so, remains significantly lower in the YTD return column.

The next several months will be a rigorous test of nascent positive sentiment that has propelled the equity rebound. The measured Unemployment rate is expected to be around 20% when the April report is released, a figure which covers the period from mid-March through mid-April.[2] The chart below showing new jobless claims this year will be familiar to those keeping track of economic developments. The weekly number is declining in relative terms but remains staggeringly high by historical measures. 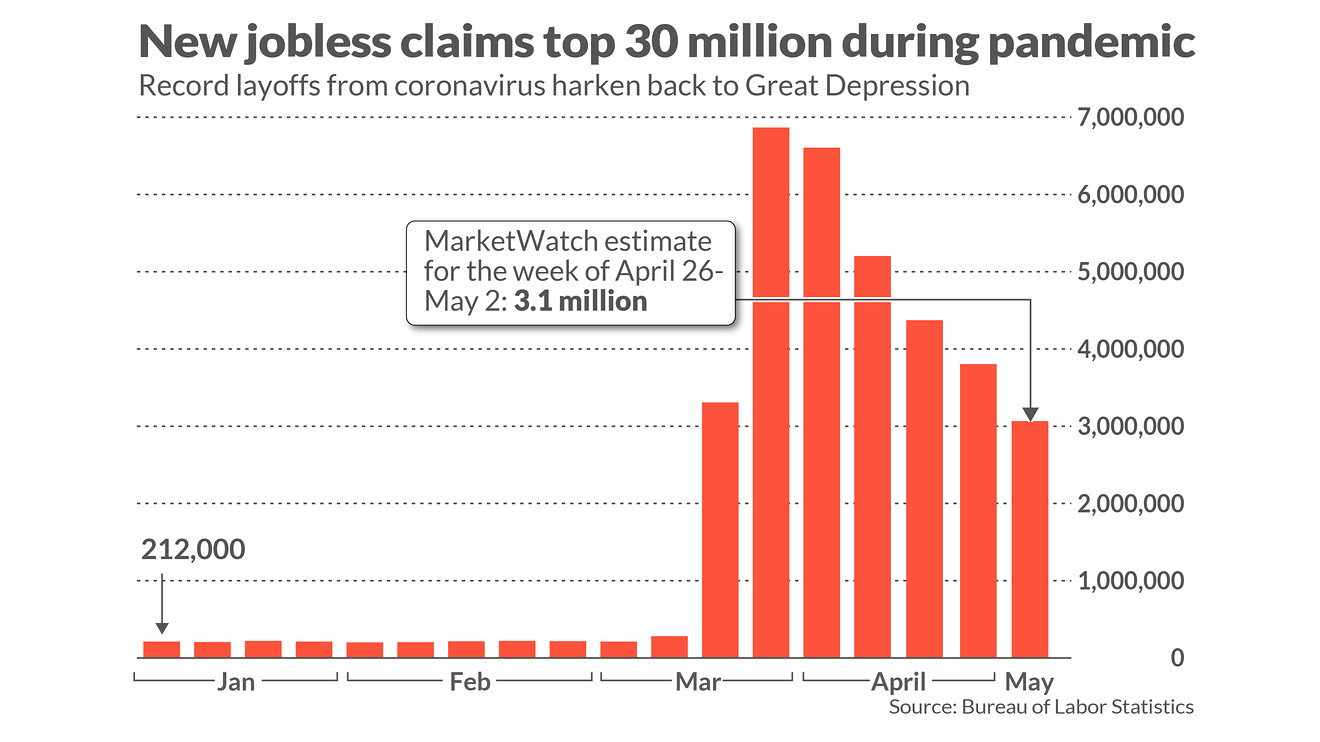 Contrast the above information with the track of the DJTMI since the end of 2019, below.

In the face of rapidly deteriorating economic news, equity investors are, not so quietly, demonstrating a belief that the worst of the upcoming recession had been discounted at the March 23 lows. This is not unprecedented. Equity investors base their buy and sell decisions on the expectation of future returns from investments. Prices, at any given point, reflect all available information that investors require to make decisions. Equity recoveries are born well before economic recovery is evident.

But is this the only consideration for markets? Is there any confirmation of an impending recovery or at least economic bottoming out aside from the admittedly important recovery by equity markets?

Commodity prices are a barometer of economic activity to the extent they reflect supply and demand for the building blocks of manufacturing activity. We’ve regarded the Dow Jones Commodity Index as an early warning signal of economic expansion or contraction for many years. Its progress mirrors this year’s action in equity markets to a great degree. 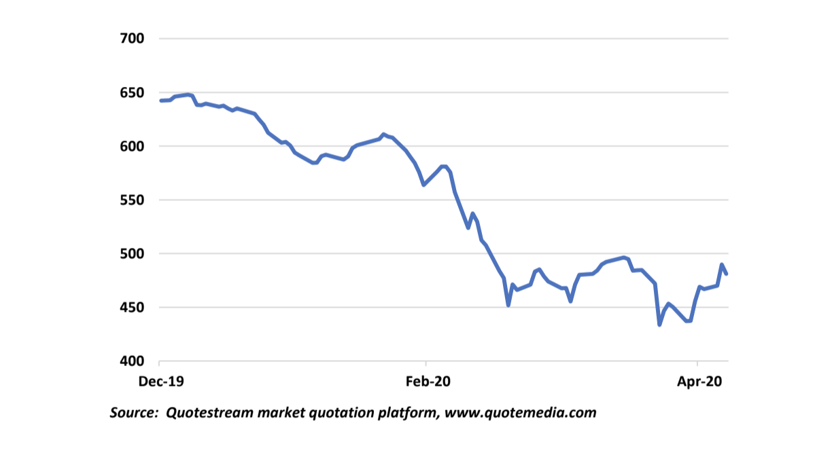 It is too early to identify a lasting uptrend (which will only be possible with hindsight) but clearly, prices for key industrial and food commodities have improved, if not quite in tandem with equity markets. What may be holding back a more robust rebound is oil.

US production of crude has declined roughly 8% since the last week of March as of May 1, however crude oil stocks (stored, including the US SPR and offshore tankers) have continued to climb, rising from approximately 1.1 billion barrels on March 27 to 1.7 billion on May 1.[3]

But a glimmer of light is beginning to firm oil prices. The mid-$20/barrel range remains well below breakeven production costs of most world and domestic producers, but a slight uptick in demand is occurring as global economies begin a reopening process.[4]

The price recovery is clearly tentative given the huge stored supply overhang. Currently, oil stored onshore in the US, including the Strategic Petroleum Reserve (SPR) is approaching total capacity of nearly 760 million barrels, which is projected to be reached this month.[5] Offshore storage in tankers has declined modestly from a maximum of 174.6 million barrels in April 27 to approximately 158.1 million as of May 4.[6]

The ongoing supply glut is the result of only minor production cutbacks and a virtually overnight 30% decline in daily world demand in mid-March. OPEC scheduled a 10% production cutback to begin on May 1, but most market observers believe only a return to more normalized levels of demand will mop up the oversupply.[7]

Nevertheless, based on the below chart, there is life in the oil futures market, although prices have simply re-attained mid-March levels. We suspect if there is further significant upside progress, those gains will be attributable more to increased demand than to production cuts. The chart below shows current expiry month prices for WTI futures through May 6. 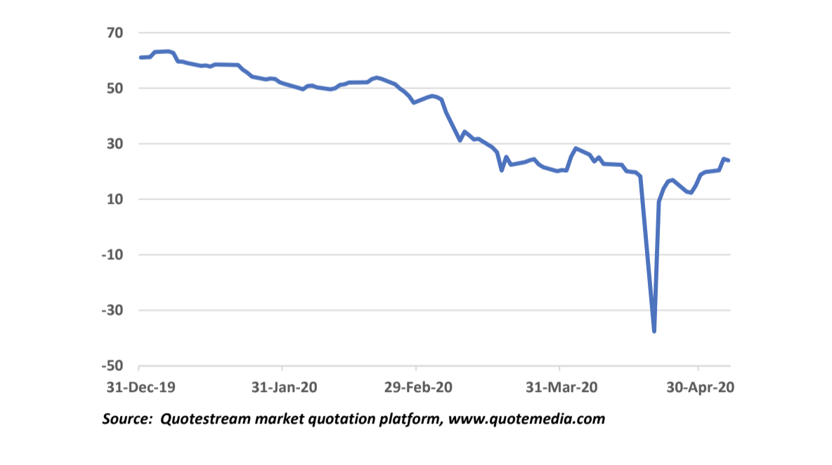 We believe markets are projecting that public and governmental focus on the Coronavirus will dissipate, possibly much sooner than might be expected based on press reporting. The frustration of workers wanting to return to their jobs is a gathering groundswell that national, state, and local leaders will find difficult to resist. Plans to remain shut down in hotspot areas until a vaccine or viable therapeutic becomes available will likely begin to reverse under this pressure.

One central fact that goes unmentioned in many analyses and lockdown rationales is that permanent vaccines are not available for seasonal viruses such as influenza. Diseases like smallpox, polio, and other scourges that do not mutate have been virtually eliminated by effective vaccines. A vaccine confers immunity from a disease, but a flu shot is an inoculation that may need to reformulate to address future mutations or differing strains.[8] This is why an annual flu shot is necessary to reduce infection probability. No permanent immunization is available. The target changes every year.

So, by definition, there is no vaccine for influenza, only inoculations delivering regimens of antibody stimulants that change annually to address mutations and newly detected strains.

An inoculation developed for the 2019 version of this virus that could be available later this year or early next is no guarantee of immunity if it returns with a different genomic configuration in the Fall or in upcoming flu seasons.

Is, then, stipulating availability of a true vaccine (immunization) for Covid-19 before easing lockdowns a straw man argument? Possibly.

Equity investors may be expressing this idea by looking past the upcoming deluge of shockingly negative economic statistics. There is simply no way to know. What is certain, however, is that the US economy will recover when released from quarantine and regardless if a two quarter recession occurs or whether it persists longer, equity prices will eventually reach new all-time highs. Patience will be rewarded.

[1] “Job losses in April likely topped 20 million and unemployment hit a record high, but jobless claims point to even more damage,” www.marketwatch.com, May 6, 2020.

Fiduciary vs. Non-Fiduciary Advisors - 6 Ways to Know the Difference