7 Key Ideas and Charts For Perspective During This Volatile Time

As I write this, the DJIA is climbing back from the nearly 3,000 point decline it experienced yesterday.  The content that follows was sent to me this morning, and full credit needs to be given to Debra Taylor, CPA/PFS, JD, CDFA, of Taylor Financial Group in New Jersey, and Horsesmouth.com. I've edited where necessary, and hope you find this to be as valuable as I did.

Even though some economists have begun comparing the current market situation to the 2008 financial crisis, this is not the 2008-2009 financial crisis.  Although the Financial Stress Indicator (chart below) is the highest since 2008, as of now, stocks have fallen 30% since their peak, as compared to the 59% peak to bottom during the 2008 financial crisis.  Additionally, the 2008 crisis resulted from systemic bad banking practices, whereas today, our banks are on very good footing and this current situation is resulting from a health crisis, which "however dire, will pass."  According to Debra, "The critical difference is that today, while the immediate future is relatively uncertain, it is fairly certain that within the next three to six months the situation will resolve itself. In contrast, the financial crisis was a period of great uncertainty where both the short- and long-term behavior of the market and the economy were complete mysteries and required remedial measures for years afterwards." 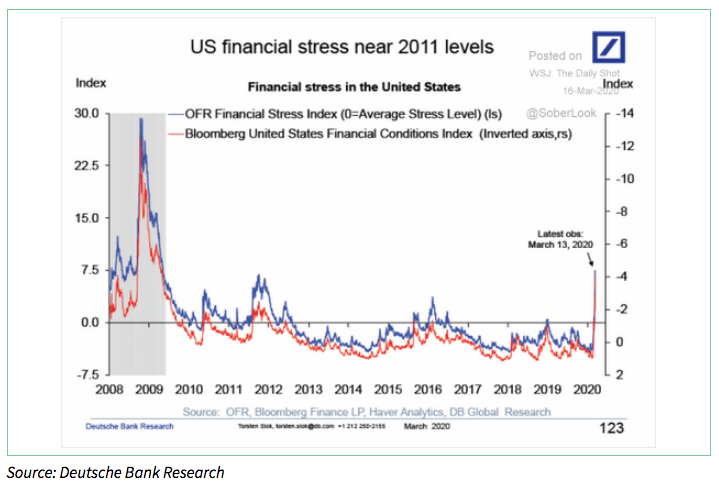 The current market distress is most directly related to the uncertainty surrounding the future of the coronavirus (and not underlying economic weakness).  The Johns Hopkins interactive world map of cases provides the best source of current information on the spread.  Below is their map of current cases within the U.S.  Each circle represents the amount of cases in a particular state, where the bigger the circle, the more cases there are. 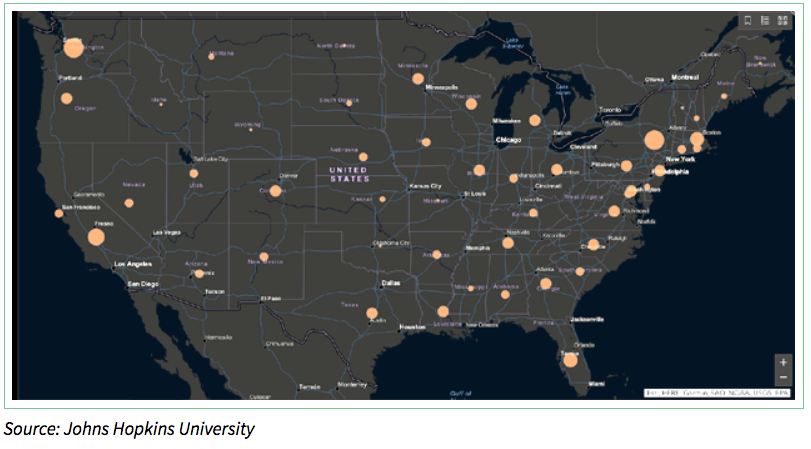 The current areas of concern are the Tri-state area, especially New York City, and the West Coast. While no state has more than a thousand cases at the time of this writing, the concern is that many people who have the virus have not shown any symptoms and have not been tested, meaning that there are many more cases than have been reported. The level of uncertainty will continue to create chaos in the markets, plain and simple. In regards to the current number of confirmed cases, there has been a significant increase over the past week. This is likely due in part to the increases in testing, however it is still cause for concern, as the increase makes it likely that businesses will close. It is also quite difficult to predict how the virus will fare in the next several months. There are multiple unknowns, such as how the virus responds to increased temperatures, and whether people who have survived the virus can contract it a second time. Again, these known unknowns will continue to create market volatility.

In the absence of clear direction, it has become clear that investors are largely responding to headlines. Instead of calmly determining the long-term risks of the current situation, investors are basing their trades on emotions instead of on the numbers. This has caused significant market volatility over the past week as each day brings different news from the day before. This graph shows that the market has been experiencing significant gains and losses with seemingly no rhyme or reason. Just last week the Dow closed down 9.99% on one day, the most since Black Monday in 1987, and locked in a point loss of 2,352, its largest point loss ever. On Friday of the same week the Dow also had one of its largest point gains ever, rising 9.3% in the last 30 minutes of trading.

4. Coronavirus has affected businesses and a technical recession may be coming

As of this writing, the coronavirus has begun to affect virtually all businesses. Currently, hospitality is being hit the hardest as people cancel reservations and cities such as New York (and the state of Ohio) shut down restaurants and bars. According to the Wall Street Journal, in some restaurants traffic is down as much as 60%. In addition, while larger businesses are able to offer paid leave or rely on profit margins, smaller businesses do not have this capability due to thinner margins and smaller cash reserves. It remains to be seen what relief is offered. It should also be noted that while “working from home” seems like an easy fix-all solution to prevent contracting the virus in the workplace, only 28.8% of workers can work from home, according to the Bureau of Labor Statistics. This creates additional knock-on effects. So if margins are too thin to pay workers to stay home and not all workers can work from home, and if business is generally decreasing, what are business owners thinking? The results are exactly what one would expect in a time of crisis. When surveyed, twice as many business owners thought that the economy would weaken within the year and, even over the past week, business owners’ confidence in the economy had decreased. On March 2, 25% of business owners believed that the economy had worsened from a year ago. By March 9, that number had climbed to 38%. Having said all that, here is the bottom line: We may be headed into a recession (see the charts below), but it is likely that any recession we have would be short lived, and would merely qualify as a “technical recession.” In addition, remember that January and February numbers were sound, and the banking system is also fundamentally sound, unlike in 2008. As a result, the data is showing that Q3 and Q4 would still emerge as positive quarters.

(This conclusion is similar to the Goldman Sachs conference call I listened to on Sunday evening). 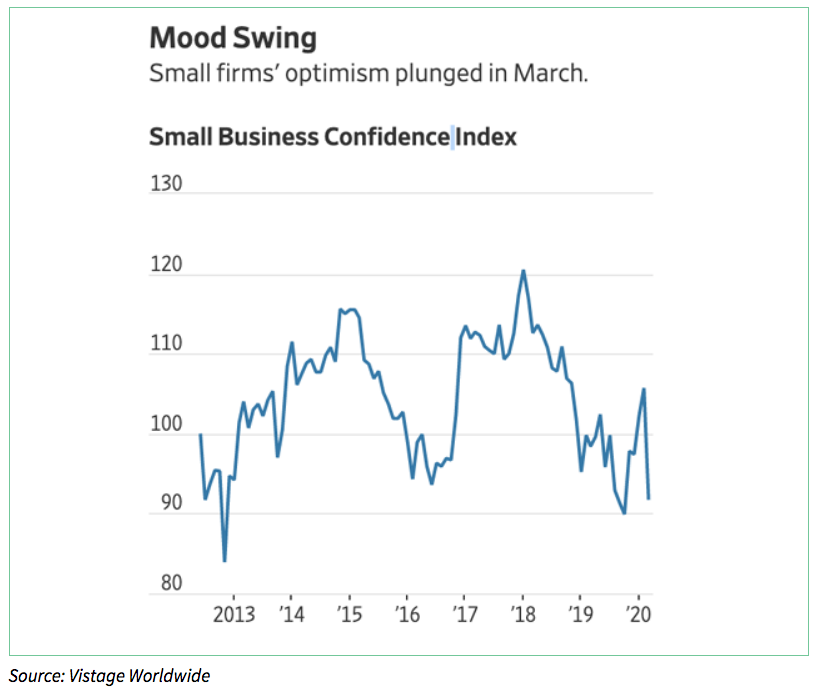 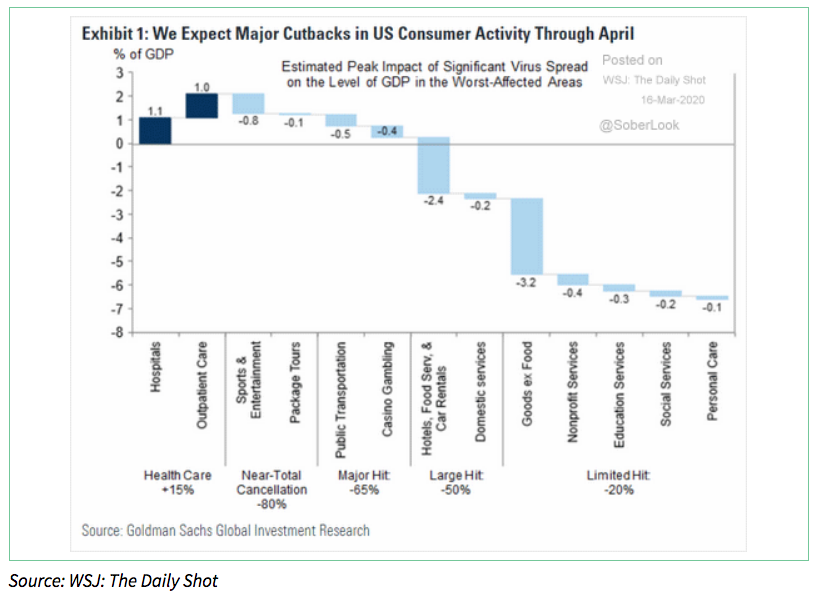 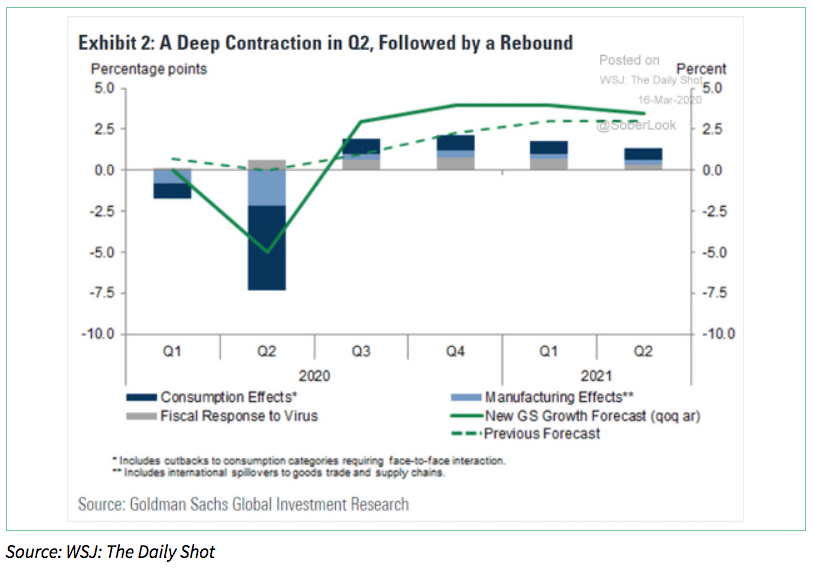 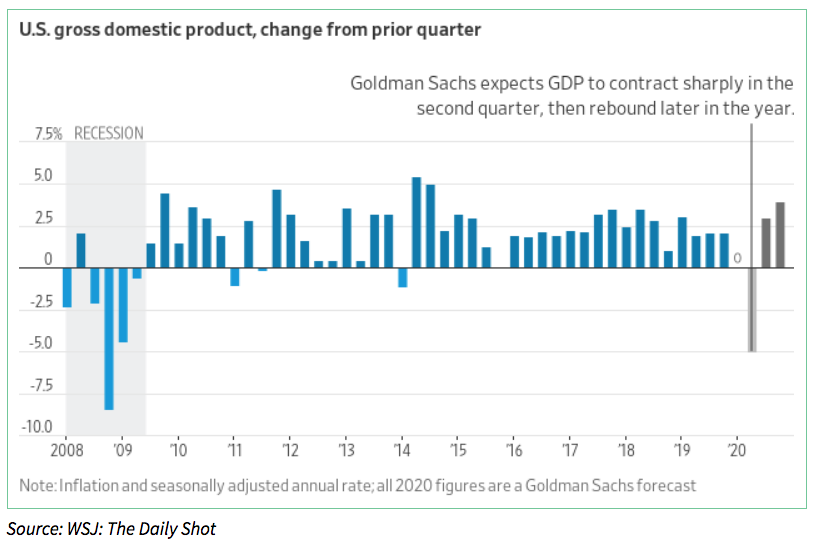 5. Don’t sit it out, however tempting it may be

The old investment mantra is to buy low and sell high. In theory, the strategy is fairly simple: purchase stocks at low prices and sell them at higher prices. Unfortunately, implementing the strategy is much more complicated because emotions and timing issues come into play. By attempting to time the market (by selling after a potential 30% loss), you can miss out on the market’s best days which account for much of the market’s gains. Looking back at the past 15 years, if you bought into the market with $10,000 in 2004 and sold out on the last day of 2019 you would have netted $26,418, a 9% annualized return. Considering that the 15-year period contained a significant recession, a 9% return is no small feat. If, instead, you mistimed the market and pulled your money, missing the 10 best days of the market, you would only gain $8,358, a 4.1% return, and less than half of the return achieved from keeping your money in the market. The more days you miss, the worse the numbers get. The time to get out was three months ago or even a month ago, not now. So, if you are antsy to do something, then take advantage of tax trading, gifting, Roth conversions and other planning opportunities instead.

6. Bond spreads: Your canary in the coal mine

Aside from the difference in the severity of the stock market rout, the U.S. corporate bond spread today is much lower than it was in 2008. Essentially, the spread indicates how risky investors think the market is. Usually the corporate bond spread is around 4% (see chart below). Currently, the spread is around 700–800 basis points, a significant deviation from the norm, but still nowhere close to the spread during the financial crisis, which was around 21%. To put it another way, investors think that the market is riskier than it usually is, but they do not think that it is on the brink of disaster as it was in 2008. As widening bond spreads indicate trouble ahead for the market, a tightening of bond spreads will give us an all clear signal that we should be watching. 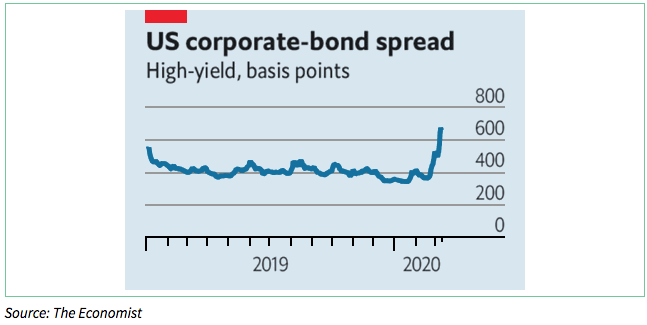 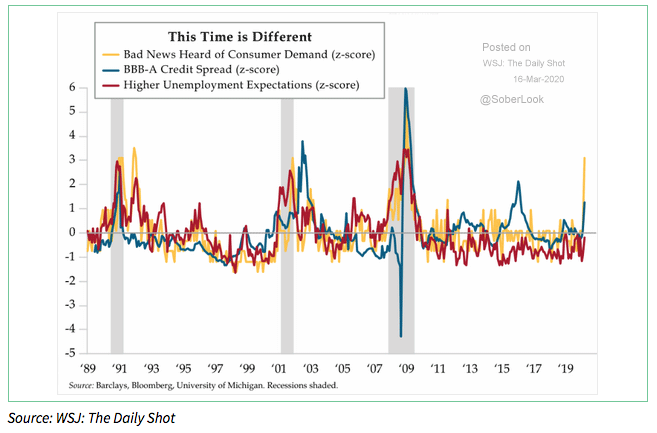 Although entering into the market could make sense, continue to watch the credit markets as it is unlikely they will steer you wrong.

7. The rebound will be coming before you know it

While the coronavirus has sent us into a bear market, it is important to remember that typically the market rebounds from epidemics quite quickly, particularly when, as here, the underlying fundamentals are strong to begin with. From the table below we can see that, despite any poor performance that initially occurred following outbreaks, stocks managed to experience gains within one year (and often sooner). 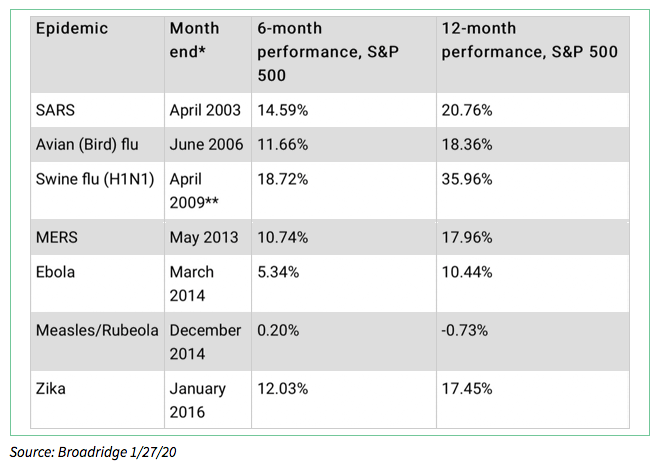 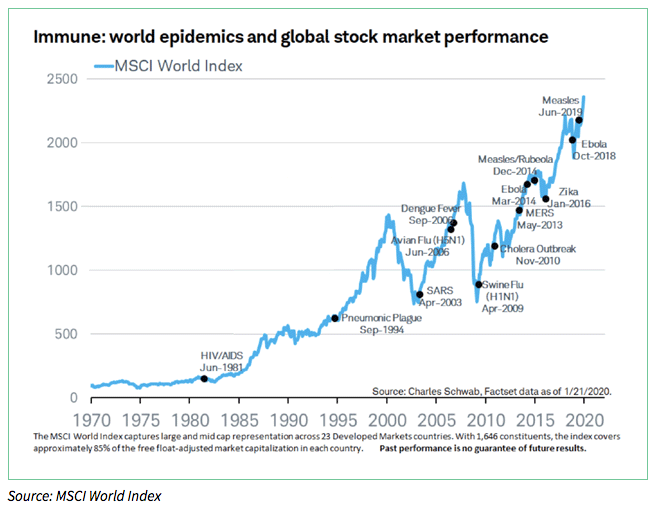 This is not the 2008-2009 financial crisis, or anything close to it.  The current fear of the market is the unknown, not structural instability.   While a recession is not guaranteed, if one does occur, it most likely will be short and not nearly as damaging as the 2008-2009 crisis.

As we have cautioned previously, remember to think long-term and stick to your overall plan.  If you want to talk, please feel free to schedule time with any one of our team for a web conference.  You can do so here:

Again, I'd like to thank Debra Taylor, CPA/PFS, JD, CDFA, and Horsesmouth.com for this commentary.  They've done a great job of summarizing much of my own thoughts in a way that is concise and informative.