Your Returns vs. the Market 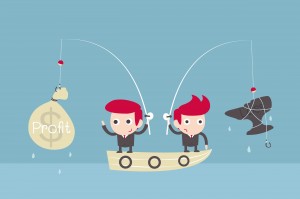 One of the most misleading statistics in the financial world is the return data we are routinely given by the financial media, telling ushow much investors made in the markets and in individual stocks or mutual funds over some time period. In fact, your returns are almost guaranteed to be different from whatever the markets andthe funds you've invested in have gotten.

How is this possible? Start with cash flows. We are told that the S&P 500 has delivered a compounded return of about 7.8% from 1992 through 2011, which sounds pretty positive until you realize that this return would only be available to somebody who invested all his or her money at the beginning of 1992 and didn't move that money around at all for the next twenty years. If you invested systematically, the same amount every month, as most of us do, then you would have earned a 3.2% compounded return. Why? A lot of your money would have been exposed to the 2008 downturn, and not much of it would have enjoyed the dramatic runup in stocks from 1992 to 2000.

In addition, there is the difference--only now getting attention from analysts--between investor returns and investment returns. Human nature drives investors to sell their stocks and move to the sidelines after their portfolios have been hammered--which is often the worst possible time to sell. And it drives people to start increasing their equity allocations toward the peak of bull markets when they perceive that everybody else is getting rich. That means less of their money tends to be exposed to stocks when the market turns from bearish to bullish, and more is exposed when markets switch from bullish to bearish.

This would be bad enough, but people also switch their mutual fund and stock holdings. When a great fund hits a rough patch, there's a tendency to sell that dog and buy a fund that whose recent returns have been scorching hot. Many times the underperforming fund will reverse course, while the hot fund will cool off. The Morningstar organization now calculates, for every fund it follows, the difference between the returns of the mutual fund and the average returns of the investors in fund, and the differences can be astonishing. Overall, according to Morningstar statistics and an annual report compiled by the Dalbar organization, investor returns have historically been about half of what the markets and funds are reporting.

And then there's the tax bite. Some mutual funds invest more tax-efficiently than others, and generate less ordinary income. Beyond that, if a fund is sitting on significant losses when you invest, you get to ride out its gains without having the tax impact distributed to your 1040. If the fund is sitting on large gains when you buy in, you could find yourself paying taxes on gains even if the fund loses money.