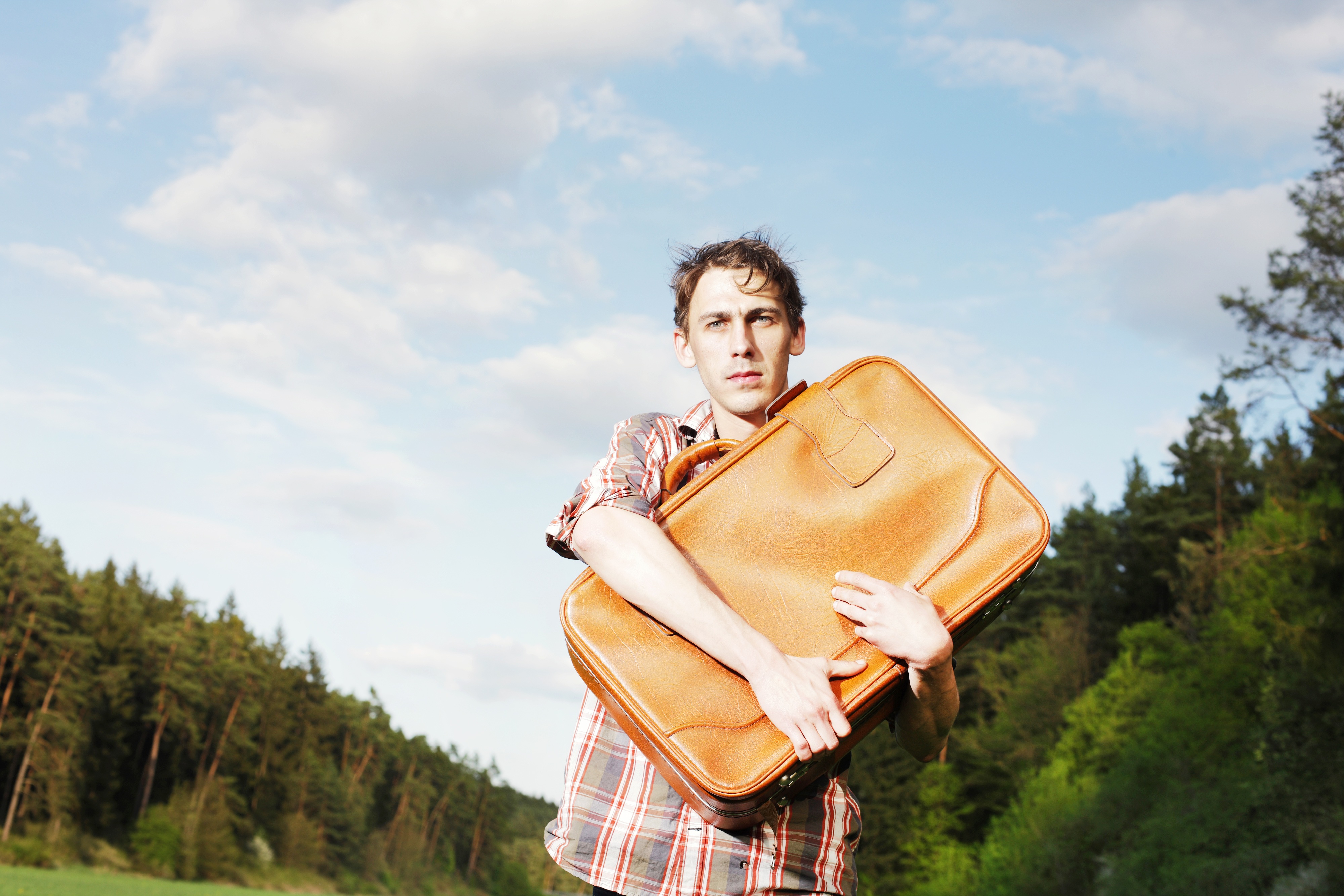 Stock prices trended generally lower during the first half of May. Most benchmark averages posted losses for the two-week period ending May 14, with the notable exception of the Dow Industrial and Transportation Averages.

At the midway point of the second quarter, broad domestic equity indexes are showing quarterly gains of 4%-5%. International benchmarks are flat and Emerging Markets equities are off about 3%. The Dow Transportation Average is the standout performer, up more than 8.5% since the end of April.

Prices had been substantially lower after April 30 before a two day rally at the end of last week mitigated losses. An unexpectedly weak employment report and a jump in inflation at the consumer level were sufficient to derail, at least temporarily, the “recovery bull market” that has persisted since last April. Closing prices for the S&P 500 since January 2020 are illustrated below. 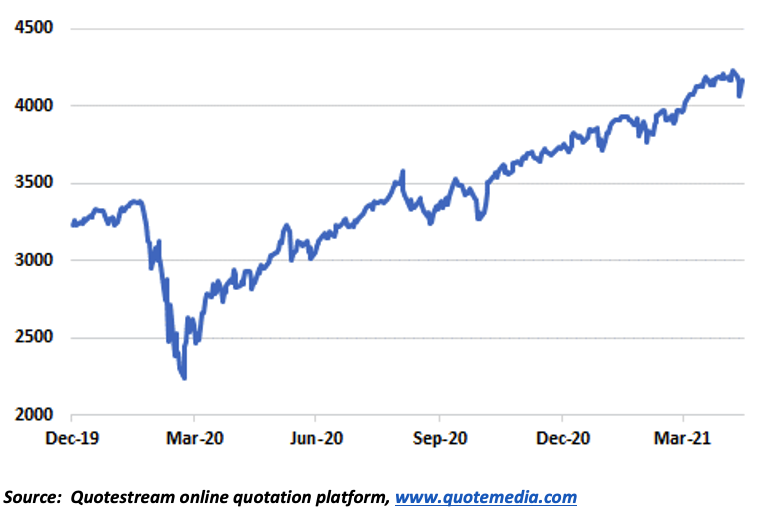 The April employment report was a jolt. A bright spot in the release was that 266,00 jobs were created, but expectations had been for approximately one million. Net job losses since the 2020 economic shutdown remain at more than eight million.[1]

Employers are complaining about an inability to reemploy former workers and two of the less visible data points in the government’s situation report were that workweeks have expanded (fewer workers working longer), and hourly wages have been rising. Both are characteristics of a tight labor market, typically experienced near the top of an economic expansion when factories and businesses are operating at full capacity. As we detailed last month, the US economy is well below its full output potential.

So, what happened? Recovery is ongoing, GDP growth has been soaring and is likely to remain strong the balance of 2021, but businesses are experiencing difficulty acquiring or rehiring workers.

Critics of Biden Administration economic policies have pointed out the paradox facing many hourly wage workers. On the one hand, employment is perceived as a positive for self-esteem and is obviously the goal to which those entering the workforce aspire.

However, $300/week supplemental unemployment insurance benefits and other subsidies are in some cases, a combination more generous than can be realized from jobs at the low end of the pay scale. Food assistance and other support programs are yielding a substantial number of individuals and families better off with government support than a job.

Commentators and politicians have pointed to this contradiction since spring 2020 when temporary support measures were instituted during the nationwide lockdown. Compensation to workers involuntarily unemployed by federal government (and some states) action was, at the outset, a compassionate act and undoubtedly meant survival for many facing financial disaster.

But that was 12 months ago. Since last April, the US economy has rebounded in one of the most spectacular growth spurts in history. Emergency benefits are scheduled to expire soon, but pending legislation includes a provision to make the supplemental unemployment insurance payments permanent.

Are incentives to strive for upward mobility that have been the hallmark of the American experience since the early 20th century being countered by a belief that voluntary unemployment is acceptable? Desirable?

At the end of March, 8.1 million jobs were unfilled and 9.7 million unemployed.[2] Job search firm Indeed.com reports that employer postings on its site as of late April have risen to 24% above pre-pandemic levels.[3] Why are workers failing to respond to offers by employers that may include signing bonuses and higher pay?

An editorial in The Wall Street Journal last week examined this subject. The author concluded we may be witnessing a permanent change in the American work ethic because of expansive government outlays for the unemployed.

“…real employers with real companies are looking for workers to do real jobs…. The welfare reforms of the 1990s were based on the realization that transfer payments undermined the work ethic…. It’s comforting to believe that natural economic forces will drive people back to work. But the scale of effects from the yearlong pandemic shutdowns, combined with the government’s trillions in direct payments, has pushed the work ethic in the U.S. to a tipping point.”[4]

We agree that paying workers more to stay home than a job returns does little to support the long term economic health of the country. Incentives matter and profoundly influence human behavior.

The April CPI jump to a better than 4% annual rate[5] over the past year was a surprise to the press but was hardly unexpected considering the 12 month surge in commodity prices. We concur with the Fed that the inflation spike is likely transitory and reflects inventory rebuilding as consumer demand returns. We look to the bond market for future inflation alarms. None have sounded yet

In Congress, the Democrat legislative juggernaut may be slowing. Several prominent Democrat senators have voiced opposition to tax increases over the past week, and others have publicly resisted selected provisions in the President’s infrastructure bill.

Moderates concerned about home state manufacturing are chaffing at the possibility of corporate taxes rising to 28%. Corporate inversions (relocating headquarters to avoid the reach of US taxes) were major factors in the stagnant employment and GDP growth that characterized the 2014-2017 period.

On the progressive left, the sticking point is State and Local Income Taxes (SALT). Deductibility of these taxes on federal returns is typically most valuable to high earners or those with large holdings of illiquid assets, such as real estate.

Progressives have signaled they will resist any restoration of unlimited SALT tax deductibility, asserting it largely benefits “the rich.”[6] Concurrently, a House bill eliminating the current $10,000 SALT deduction limit has been introduced by a bi-partisan group that wants to fold the provision into infrastructure appropriations.

Senate debate on the infrastructure bill will soon begin. At this juncture, statements by several key Senators suggest that compromise may be required to transform Mr. Biden’s bill into law. It is, of course, possible that when votes are cast, Democrats will coalesce and pass the House bill with 51 votes under reconciliation protocols.

Whether recent cracks in Democrat caucus unity are real or simply posturing will ultimately determine whether incentives for the American economy are substantially altered by implementation of the Progressives’ agenda. Some moderate senators may be refusing at the figurative fence.