Two 3% declines by US broad based equity indexes in the last eight trading sessions, bracketing some strong advances, have left investors reeling. Interest rates continue a steady decline and the press is rife with predictions of a coming recession. Are these warnings valid? Is the US economy about to fall off a cliff?

We believe the answer is an emphatic, “No.” It is certainly true that outside the US many major economies are experiencing flagging growth and, in some cases, notably Germany, GDP growth has been fluctuating slightly above and below zero for several quarters. US growth in contrast, remains strong and inflation low.

Trade negotiations between the US and China are currently paused with the next round of talks scheduled to begin in early September. While the existing tariff regime instituted by both countries remains in place, the threat of further hikes by the US on another $300 billion of imports from China has been pushed back from September 1 to December. This development sparked an explosive rally in US equities earlier this week. Subsequently, however, a new inversion in the Treasury yield curve as two-year yields moved nominally above ten-year levels was enough to send already skittish traders back to the sell desk.

Bond market action continues to argue that short term interest rates should be much lower than the Fed’s current 2%-2 ¼% targets. The yield on the 3-month T-Bill has already dropped nearly 10 basis points (bps) below the low end of the range, closing yesterday at 1.91%. Remarkably, the 30-year Treasury bond yield is now less than 15 bps above the Bill rate, closing at 2.03% in yesterday’s session.

Note that aside from the shortest end of the curve, yield spreads between other maturities remain close to historical norms. What is clear is that short term rates are too high relative to longer maturities and relative to the inflation rate, which remains below 2% annually. To normalize the curve a Fed Funds rate cut of 50-75 bps is indicated. However, despite yesterday’s stock carnage and persistent downward market pressure on intermediate and long term Treasury instrument yields, the Fed appears sanguine and indicated yesterday that it does not expect any interim action prior to its next scheduled meeting in mid-September.

So, what is the impetus for talk of a recession looming just around the corner? The single rationale for these dire predictions appears to be the inversion in the Treasury yield curve, which has existed since late Spring this year. Extrapolation of Chinese GDP growth trends (downward) and an assumption that the tariff war will damage US economic activity are corollaries to the belief that an inverted yield curve will inevitably lead to negative economic growth. Assertions that trade tensions will torpedo the US economy have been with us since the first tariffs were applied months ago. So far, no significant negative effect on growth, other than anecdotal, has appeared, nor have predicted tariff related price increases.

We take an alternate view of the source of the yield curve inversion, which we’ve mentioned before. The Federal Reserve is maintaining short term interest rates at an artificially high level in the face of clear market signals. The steady downtrend in the 30-year Treasury bond, for example, is an indisputable indication that inflation expectations are not accelerating. Further, these long term rates at roughly 2% equal the lows posted during the Quantitative Easing programs in the wake of the 2007-9 recession. Below is a 10 year chart of the US Treasury’s 30-year bond yield. 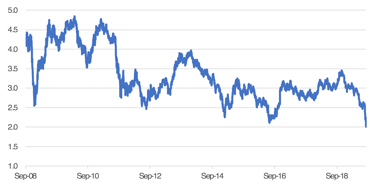 Two conclusions can be drawn from this chart. First, yields on this bond are about as low as they can reasonably be expected to drop in a low inflation environment. Second, falling interest rates do not cause recessions. Typically, recessions are preceded by tight credit conditions, accelerating inflation and rising interest rates. None of these conditions exist at present. Only after it is apparent that the economy has “rolled over” do rates at the long end of the curve begin to decline.

Below is a look at the last several months of key economic indicators, which we believe offer a comprehensive cross sectional view of the economy’s health. It is difficult to construe these numbers as indicative of either a slowing or soon to slow growth pattern. Two indicator results from July will be released later this month, but in our view, there is little in these statistics to suggest a coming dramatic rever the US economy’s expansion.

It is easy to fall victim to the financial press’s hand wringing as it explains every day’s trading results as if their sources are prescient and their opinions, truth. Equity markets fluctuate and at current higher levels, fluctuate more violently. We don’t dismiss the magnitude of recent equity market declines (or advances) but it is important to attempt to tune out the daily noise that accompanies the markets.

The credit markets are adamant that short term rates must be allowed to decline, which would quickly result in a positively sloped Treasury yield curve. Whether the Fed’s “shoulder shrugging” attitude persists until next month remains to be seen but what we can assert is that the likelihood of significant reductions in short term interest rates is a virtual certainty.

As for recession predictions, economic statistics and the direction of interest rate movements simply don’t support these views, rampant as they may be. If a recession were truly gathering, we wouldn’t be reading about it in all the papers.