May 2019 Economic and Market Commentary

Monthly economic and market views from our Chief Investment Strategist, Byron Sanders.  In this month's edition, Byron provides some insight on the challenging month of May for equities, some comments on Brexit, the Fed, and tariffs.  Read on for more.

May did not deliver positive returns for equity investors. Worldwide benchmark indexes were lower across the board and not insignificantly. Softening growth expectations in the US and Europe combined with ongoing nervousness about the future of trade talks between not only the US and China but also the EU and a potentially independent UK kept investors watching the news ticker for signs of progress or obstacles.

Political winds have begun to gather in Europe as well as at home and for the next 18 months will increasingly draw markets’ attentions. European Parliamentary elections in late May saw an increase in the influence of populist movements across the Continent. The possibility of a General Election in the UK late this Fall is also a concern.

In the US, the economy remains firmly in expansionary mode. However, some dislocations resulting from increased costs due to existing tariffs and the possibility of a wider range of levies may have modified formerly aggressive growth initiatives, especially capital spending plans. Next month, we’ll detail key economic statistical measures at the halfway point of 2019. As the table below illustrates, despite May weakness, the global equity markets have maintained strong year to date gains, especially domestically.

One of the more noteworthy developments during May was the strength in bond prices. We’ve previously discussed the existing inversion of the US Treasury’s yield curve, which at this writing features 5-year and 10-year yields some 40 bps and 17 bps respectively, below the 3 month T-Bill level. Throughout the month, two schools of thought have addressed this anomalous situation. First, based on historical tendencies, the inversion is being interpreted as the onset of a signal that recession is looming. Typically, an inversion that lasts 5-6 months is accepted to be an early warning of imbalances in the credit market that will lead to a more restrictive lending climate. While the historical record is valid to the extent that long-lived inverted curves have preceded slowdowns, it is also true that not all inversions have presaged recession.

The second explanation is that credit market participants are focusing not as much on the pace of economic activity as on the persistent disparity between the reported inflation rate and bond yields. Currently, statistical inflation as measured by the CPI and PPI is roughly 1.5% annually.[1] Downward pressure on longer term yields, which are influenced more by market forces than by Federal Reserve open market activity, may be simply a reflection of low inflation expectations. The implied action in this scenario is that if trade and/or economic activity contracts due to tariffs, the Fed will cut short term lending rates.

Chairman Powell confirmed earlier this week that the second scenario is the more accurate interpretation of the current situation in the credit markets.[2] With ten-year note yields suggesting an appropriate 3 month Bill yield close to 1 ¾%, the markets have effectively forced the Fed’s hand. There appears to be no compelling reason to maintain what is essentially a tight policy in the face of low inflation and downward pressure on intermediate and long-term yields. Referring to tariffs as a possible check on US economic expansion, the Chairman has the best of both worlds. He can refer to the Fed’s independence and aver that any cut was not necessarily a reaction to market forces but a preemptive measure to ensure the free flow of credit.

Whatever the ultimate rationale for any Fed actions, the credit markets are emphatically calling for a short term rate cut. The Fed Funds futures market has quickly priced in an expectation that January 2020 will see the rate at roughly 1.75%. In fact, as the chart below indicates, expectations for a reduction below the current 2 ¼% floor were in place by early May followed by a better than ¼% drop (shaded area) on heavy trading volume in the immediate wake of Chairman Powell’s recent comments. Traders are now predicting a 70% chance of a rate cut at the Fed’s July meeting.[3] 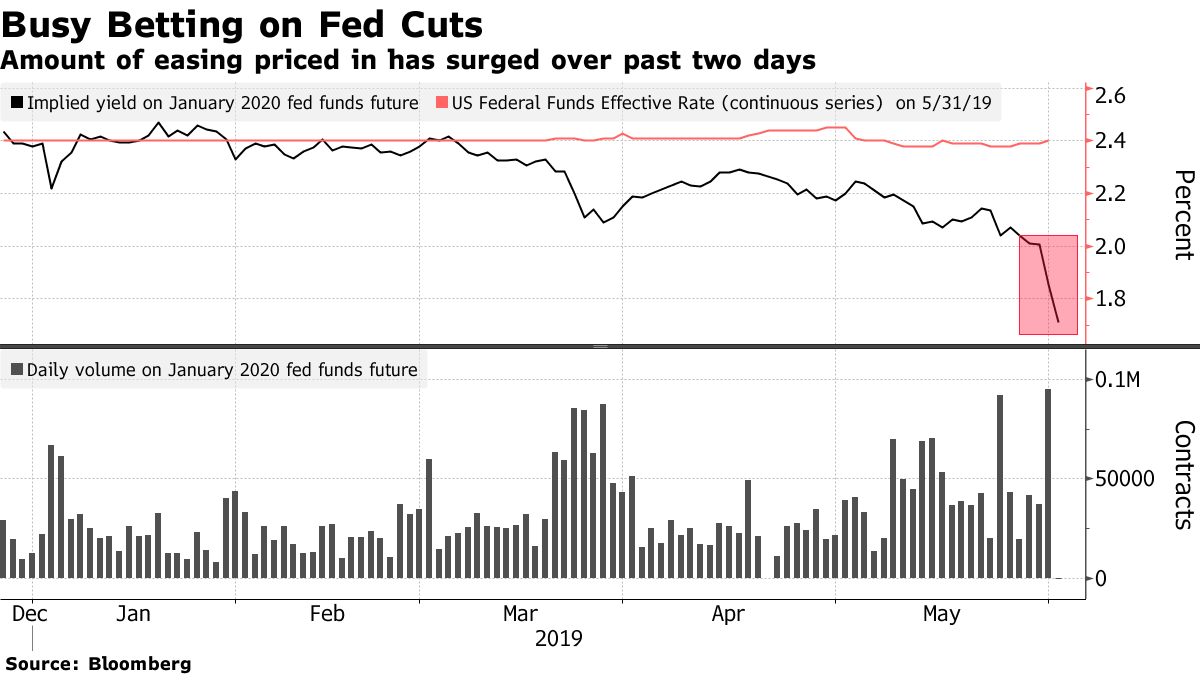 A political phenomenon has occurred in the UK over the past two months. As Parliament debated and repeatedly failed to pass an EU Withdrawal Agreement during late March and early April, proponents of Brexit became increasingly frustrated with the refusal of the Government and the houses of Parliament to consider leaving without an agreement.

The Brexit Party was formed to break the impasse. In roughly eight weeks the party has become a major British political force. This is no mean achievement. Mr. Nigel Farage, leader of the Brexit movement in 2016, concluded that Leavers had grown quite impatient with deadline delays, Mrs. May’s negotiated Withdrawal Agreement, and Parliament’s clearly expressed unwillingness to move forward with a no-deal withdrawal. His remedy was to form the Brexit Party. We’ve previously noted the widespread, substantial success of the new party in local UK elections last month.

In late May, Brexit Party candidates stood for selection as Members of the European Parliament (MEP), the governing body of the EU. When the counting was completed, Brexit party candidates had swept all areas of the UK except for Scotland and Northern Ireland (where no candidates were offered). The Brexit Party is now the largest single political party in the EU Parliament, at 29 members.[4]

Mr. Farage and his colleagues have proclaimed that they were elected to put themselves out of a job as soon as possible (by Britain exiting the EU).[5] October 31 is now the re-established deadline for Brexit. The new party, which swamped the Conservative party in the European Parliament elections, will be a force to be reckoned with should the UK Parliament again deadlock and fail to deliver Brexit. In that event, a General Election is likely with every member of the House of Commons obligated to stand for election. While a political lifetime lies between October 31 and now, the sudden and forceful emergence of a party dedicated to Brexit is a strong message to Westminster. It will be an interesting summer in the UK.

Late Notes: Apparently President Trump’s tariff threats were sufficiently draconian to bring Mexican officials to the negotiating table. In relatively short order, the issues appear to have been resolved. The President announced on June 7 that no tariffs will be forthcoming. He cited a willingness by the Mexican government to exercise their power to retard the flow of illegal immigration into the US through Mexico and has also hinted at new concessions by the Mexicans, expected to be announced in coming days.

Federal Reserve Chairman Powell has now publicly indicated that the Fed stands ready to reduce short term interest rates if tariff regimes begin to negatively impact US economic activity.[6] We believe that he is responding to market pressures described above, but whatever the impetus, information suggests strongly that the next move for the Fed will be to cut rates.