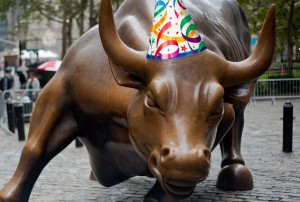 Few predicted at the time that stocks had put in a bottom, and investors had just given birth to a new bull market that would take the major indices to a series of new highs. Nearly six years later, the S&P 500 ended February 2015 at 2,104.50.

Thus far, the bulls have simply blasted through a series of hurdles. Obstacles that have crossed the bullish path include the gridlock on Capitol Hill, the fiscal cliff, 2013’s government shutdown and threat to breach the debt ceiling, an anemic U.S. recovery, the Arab Spring, the Russian incursion (or invasion if you prefer) into Ukraine, the rise of Islamic State, and global economic weakness. None have decisively derailed the bullish run.

There was the summer of 2011, when the bulls were temporarily tripped up by the growing euro zone debt crisis, a threat of a double-dip recession, and the U.S.A.’s loss of its triple-A credit rating from Standard & Poor’s. But it wasn’t long before patient investors were rewarded with new highs.

There were the naysayers who credited the market’s gain to the Fed’s generosity via quantitative easing (QE), or the trillions of dollars in longer-term bond and mortgage-backed security purchases. The end of QE was to coincide with the end of the bull market. That didn’t happen.

More recently, neither the scare created by the Ebola virus, the surging dollar that has slowed revenue growth among the multinational corporations, nor the collapse in oil prices have prevented the S&P 500 Index or the Dow Jones Industrials from crossing into record territory last month.

Nor did it stop the NASDAQ Composite from cracking 5,000 for the first time since the 2000 Internet craze.

But are stocks now overvalued? That question tends to come up with an increasing amount of frequency these days.

John Bogle, who is the founder of the Vanguard Group, was asked that very question in a late February interview on CNBC. Here's what he had to say:

“The stock market is fairly, fully valued. I don’t see it as particularly cheap. But if it’s a little overvalued, that’s what we have to deal with as investors. Sometime it’s overvalued and sometimes undervalued. There’s certainly nothing approaching a bubble.”

“When you look out far enough down the road you see an awful lot of risk out there – risk to the European financial system…and risk to the euro itself. There is terrorism going on in the Middle East and it may be spreading. The world is a risky place and stocks are not cheap.”

When asked if he thought stocks were expensive, he replied,

While I would agree with him that stocks aren’t cheap, let’s talk about how “expensive” stocks may or may not be using one of the more common gauges of market valuation.

As February came to a close, the price-earnings (P/E) ratio on the S&P 500 Index stood at 19.0, according to the Wall Street Journal.

Using the data provided by Yale Professor Robert Shiller, whose Shiller Cyclically Adjusted P/E ratio and Case Shiller Home Price Index have garnered plenty of attention, the average P/E ratio going all the way back to 1960 is 18.9, barely below today’s valuation.

Before I go on, let me get a little wonky and provide a brief explanation of the P/E ratio.

If a company earns $1 billion in a year and has 500 million common shares outstanding, it is said to earn $2 per share (EPS or earnings per share). That’s $1 billion divided by 500 million.

If the firm’s stock is selling for $40 per share, it has a price-earnings ratio of 20, or 40 divided by 2. It’s really quite simple. We can do the same thing for the S&P 500 Index by taking the current index and dividing it by the past four quarters of earnings.

Getting back to our narrative.

Let’s add interest rates to the mix, which are at rock bottom levels today. T-bill rates are practically at zero and the 10-year government bond yield is hovering near 2%. Both add to the attractiveness of stocks.

I won’t get into the minutia of discounted cash-flow models, but simply put, low rates in today’s fixed income market provide little competition for stocks.

If we take it out one more iteration, research provide by both Guggenheim Investments and Crestmont Research (via Advisor Perspectives) back the premise that low inflation is supportive of higher P/E ratios.

For starters, low inflation enhances the quality of earnings growth as rising profits are not simply the result of price hikes. And low inflation encourages a more accommodative monetary policy, which adds to the fertile environment for stocks.

Whether we use the Consumer Price Index or the Fed-favored PCE Price Index, both headline and core inflation is stable and is running below 2%, which are historically low levels.

While the expanding economy, rising corporate profits, and a low rate backdrop have created strong tailwinds for stocks, it’s never a straight line up.

Though we haven’t had a 10% drop in the S&P 500 Index since the summer of 2011, we have experienced turbulence. Last October and December and a hesitant start in January are prime examples.

Whether stocks are fully valued or have room to run always creates lively debate, but at a minimum, stocks aren’t cheap. Yet, expectations of moderate growth coupled with gradual Fed rate hikes help support prices.

Still, valuations appear to be quite lofty to some and any uncertainty creates turbulence.

At today’s levels, any bad news can and does encourage short-term traders to head to the sidelines. Sometimes the moves can be quite violent, as we saw last October.

At much lower prices, those same headlines might not have rattled traders to the extent they do now. Yet, each time it has happened, whether recently or over the course of the last six years, the fundamentals have reasserted themselves, limiting the downside and driving stocks to new highs.

What does all of this mean?

While new highs in the market are reassuring, I’m sometimes asked whether that’s a good time to “cash in our chips.”

First of all, I hesitate to even use the term chips since that conveys we’re sitting in a casino with a drink in hand. As I emphasize in our meetings, we’ve carefully crafted a well-diversified investment portfolio designed to achieve your long-term goals. These are blue-chip investments, not a roll of the dice.

While I may sometimes recommended we adjust your equity allocation upward or downward based on expected changes in the fundamentals, or for that matter, if you’ve experienced a change in your personal situation, a new high, by itself, is not a good reason to sell.

Following the uncertainty in January, the broad-based index of 500 large companies racked up four closing all-time highs in February, with the last recorded on February 24 (St. Louis Federal Reserve). Again, a new high is not a good reason to sell.

The current bull market will come to an end and the economy will enter a new recession. It’s the economic cycle of life. While the portfolios we recommend are not immune to downside risk, they are individually crafted to meet your longer-term financial goals, including the bumps we sometimes face.

I hope you’ve found this review to be educational and helpful. Let me emphasize, it is my job to assist you! If you have any questions or would like to discuss any matters, please feel free to give me or any of my team members a call.

As always, I’m honored and humbled that you have given me the opportunity to serve as your financial advisor.