Wishing you a relaxing and enjoyable holiday. Here are some patriotic thoughts to ponder  on your day off - from the Art of Manliness blog. 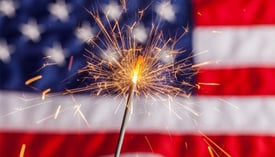 While figures like Thomas Jefferson and George Washington may come more readily to mind when we think of America’s revolutionary period and founding, the foremost proponent of the cause of independence was truly John Adams. Nobody made more speeches with more vigor for the side of liberty. Because of this, he was put on a five-man committee to draw up a Declaration of Independence, and became that document’s most ardent advocate.

Adams continued his independent streak as the country’s second president. He refused to accept bribes of any sort, didn’t play into the political system of patronage and favors, and absolutely abhorred the budding “parties” which were forming. While those traits didn’t lend themselves to securing Adams a second term, they did cement his place in American history as a man remembered best for his integrity and honesty. He was never afraid to speak up and speak out.

Because of his avid use of rhetoric, Adams left his mark not only in the way he shaped the birth of this country, but in his words that remain with us today. Throughout his long life — which poetically ended on the 50th anniversary of the signing of the Declaration — Adams was a prodigious speaker and letter writer who never minced words. This output has left us with a treasure trove of wisdom on everything from the cause of independence, to friendship, to reading, and more.

Below we’ve curated dozens of Adams’ pithiest and sagest quotes for your enjoyment and edification.

“Let frugality and industry be our virtues. Fire (our children) with ambition to be useful.”

In a letter to Abigail

“If conscience disapproves, the loudest applauses of the world are of little value.”

“Liberty, once lost, is lost forever.”

“I read my eyes out and can’t read half enough neither. The more one reads the more one sees we have to read.”

“I fear that in every elected office, members will obtain an influence by noise not sense. By meanness, not greatness. By ignorance, not learning. By contracted hearts, not large souls . . . There must be decency and respect.”

“Human passions unbridled by morality and religion . . . would break the strongest cords of our Constitution as a whale goes through a net.”

“Go on and improve in everything worthy.”

In a letter to a grandson

“The longer I live, the more I read, the more patiently I think, and the more anxiously I inquire, the less I seem to know. . . . Do justly. Love mercy. Walk humbly. This is enough.”

In a letter to a granddaughter

“Defeat appears to me preferable to total inaction.”

“Because power corrupts, society’s demands for moral authority and character increase as the importance of the position increases.”

“I will rouse up my mind and fix my attention. I will stand collected within myself and think upon what I read and what I see. I will strive with all my soul to be something more than persons who have had less advantages than myself.”

From his journal, as a young twentysomething

“The true source of our suffering has been our timidity. We have been afraid to think. . . . Let us dare to read, think, speak, and write.”

“Move or die is the language of our Maker in the constitution of our bodies.”

In a letter to his son Charles

“The smell of the midnight lamp is very unwholesome. Never defraud yourself of sleep, nor your walk.”

In a letter to his son John Quincy

“Friendship is one of the distinguishing glorys of man. . . . From this I expect to receive the chief happiness of my future life.”

“Above all, except the wife and children, I want to see my books.”

“You will ever remember that all the end of study is to make you a good man and a useful citizen. This will ever be the sum total of the advice of your affectionate father.”

In a letter to his son John Quincy

“Facts are stubborn things; and whatever may be our wishes, our inclinations, or the dictates of our passion, they cannot alter the state of facts and evidence.”

“Virtue is not always amiable.”

“Our obligations to our country never cease but with our lives. We ought to do all we can.”

“The prospect now before us in America ought . . . to engage the attention of every man of learning to matters of power and right, that we may be neither led nor driven blindfolded to irretrievable destruction.”

“Posterity! You will never know how much it cost the present Generation to preserve your Freedom! I hope you will make good use of it. If you do not, I shall repent in Heaven, that I ever took half the Pains to preserve it.”

“Liberty cannot be preserved without a general knowledge among the people.”

“You will never be alone with a poet in your pocket.”

“Old minds are like old horses; you must exercise them if you wish to keep them in working order.”

“No man is entirely free from weakness and imperfection in this life.”

“Liberty must at all hazards be supported. We have a right to it, derived from our Maker. But if we had not, our fathers have earned and bought it for us, at the expense of their ease, their estates, their pleasure, and their blood.”

“As much as I converse with sages and heroes, they have very little of my love or admiration. I should prefer the delights of a garden to the dominion of a world.”

“The only foundation of a free Constitution is pure virtue, and if this cannot be inspired into our people in a greater measure than they have it now, they may change their rulers and the forms of government, but they will not obtain a lasting liberty. They will only exchange tyrants and tyrannies.”

“I must study politics and war, that our sons may have liberty to study mathematics and philosophy. Our sons ought to study mathematics and philosophy, geography, natural history and naval architecture, navigation, commerce and agriculture in order to give their children a right to study painting, poetry, music, architecture, statuary, tapestry and porcelain.”

“What do we mean by the Revolution? The war? That was no part of the revolution; it was only an effect and consequence of it. The revolution was in the minds of the people.”

“Abuse of words has been the great instrument of sophistry and chicanery, of party, faction, and division of society.”

“To believe all men honest is folly. To believe none is something worse.”

“Tyranny can scarcely be practiced upon a virtuous and wise people.”

“Human nature with all its infirmities and depravation is still capable of great things. It should be your care, therefore, and mine, to elevate the minds of our children and exalt their courage; to accelerate and animate their industry and activity; to excite in them an habitual contempt of meanness, abhorrence of injustice and inhumanity, and an ambition to a excel in every capacity, faculty, and virtue. . . . But their bodies must be hardened, as well as their souls exalted. Without strength and activity and vigor of body, the brightest mental excellencies will be eclipsed and obscured.”

In a letter to Abigail

“I am apt to believe that (Independence Day) will be celebrated by succeeding generations as the great anniversary festival. It ought to be commemorated as the day of deliverance, by solemn acts of devotion to God Almighty. It ought to be solemnized with pomp and parade, with shows, games, sports, guns, bells, bonfires, and illuminations, from one end of this continent to the other, from this time forward forevermore.”

Motivational Posters from the Founding Fathers

Podcast on the Self-Education of George Washington

The post The Best John Adams Quotes appeared first on The Art of Manliness.