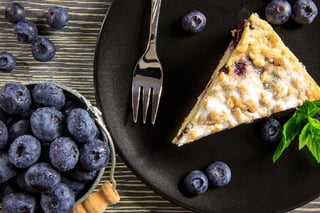 As fee-only financial planners, the overriding concern we hear from people approaching retirement is “will I have enough to live on?”  Followed closely by “how can you make my money grow, without exposing it to a lot of risk?”  After the dramatic economic downturn in 2008, even the most confident investors can become a bit skittish when they think about relying on their investments for the next 20 or 30 years.  And I get concerned when I look at the financial planning industry and the simplistic solutions that it typically offers people.  It seems that a majority of investment firms and advisors default to the traditional methods of statistical backtesting, mean-variance optimization and plotting portfolios along the “efficient frontier” in an attempt to deliver acceptable performance (if these terms mean nothing to you, don’t worry, they don’t mean a lot to the people who spout their virtues either).

Now, I’m not saying that there isn’t validity in some of these methods.  It is important for competent advisors to understand them, and to also understand their shortcomings.  While any or all of these tools may work well for people in their earning and investing years, they may set up some individuals for an emotional and anxiety-ridden retirement if they are in the hands of in inexperienced advisor.

While the traditional pie-chart approach to investing has its virtues, such as being able to see at a glance how a portfolio is diversified, it typically is used as data to develop an expected rate of return, and to evaluate how closely it matches an “efficient” portfolio, a la the following image (to give you an idea of how prevalent this theory is, it took me about two seconds to find this on Google): 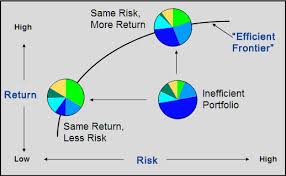 And here’s another view: 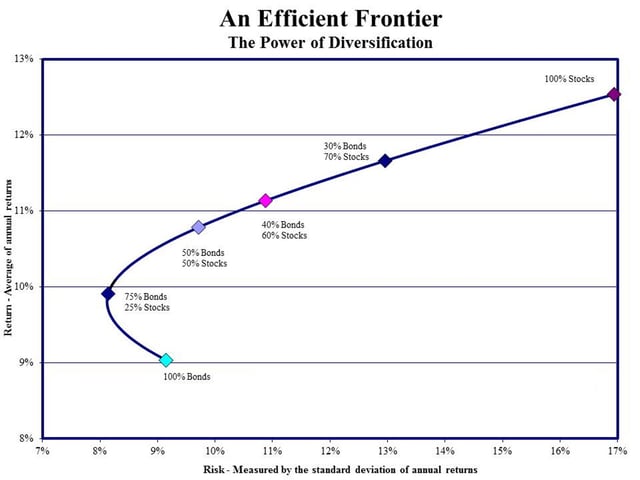 There are myriad problems with an over-reliance on this approach, not the least of which is that in any given timeframe, the assumptions in these charts could get upended.  How do you think this last chart would have looked in the 1970’s and ’80’s when interest rates approached 14%, and the historical risk on bonds was similar (hint:  a lot different than this chart - as bonds returns were higher than stocks, as they were in the middle of the 2000’s).  How prudent would it have been to tightfistedly hang on to a set asset allocation policy back then?

This problematic thinking is not a concern for every investor, as some have adequate sources of outside income (pensions, state or government retirement systems, etc.) or significantly more assets than they could ever use in their lifetimes.  But for the person who has just enough of a portfolio to supplement his or her retirement in addition to Social Security, it may be an approach that keeps them up at night.  For this client, we recommend the use of a “bucket” strategy.  A bucket strategy basically breaks down the projected income needs of the client into segments with varying time frames, depending on his or her expected future goals and needs.  Different risk and return assumptions are assigned to each segment relative to the need to be more conservative or aggressive.  So a person my have a portfolio with 4 buckets assigned to it - cash and very conservative investments in the first bucket to get them through the first X years of retirement, followed by a balanced bucket, a moderate bucket, and an aggressive bucket.  Now, we can adjust the investment vehicles in these buckets based on economic conditions and forecasts, and also move assets between buckets as needed.  The idea is to only commit assets that are needed in the near-term to more stable investments, and to reserve more aggressive holdings for later years. 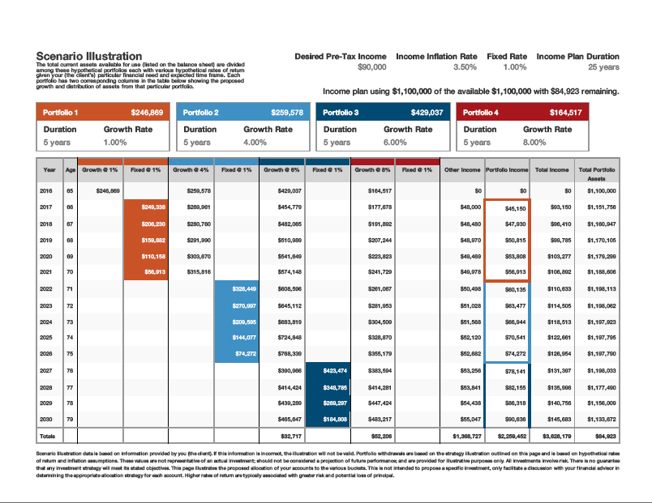 In addition to being a very practical approach, the bucket strategy tends to make sense to people who don’t spend a lot of time in the financial markets, while also putting their minds at ease.  Obviously, you could take this and develop an overall rate of return need for the portfolio, but there can be a world of difference in concept and understanding.  Also, as neat as this looks, it can get a little challenging when applying the strategy across taxable, and tax-preferred accounts.  One of our goals is to maximize the tax advantages of our retiree client portfolios, so we have to be careful about which assets go where.

In summary,  we’ve found that both approaches work, depending on the client’s circumstances, and as long as periodic evaluations and adjustments are made.  There are, however, certain indicators that we look for when recommending one strategy over another, as when it comes to retirement income planning, one size does not fit all.

If you would like an analysis of your portfolio, and whether the bucket strategy makes sense for you, click the button below.