BonFyre of the Vanities

Technology and the meaning of true relationships. 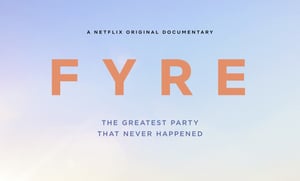 all, I was not aware of the "Fyre Festival" that is the subject of the documentary, and the events that transpired leading up to and during its massive failure.

Watching the film is like watching a cataclysmic car accident on a busy highway. One in which all the drivers are either drunk, stupid, exhibitionists, or all three. I felt like I was watching a movie where it was impossible to like anyone, including the "influencers" and ignorant customers of the "event."

Fyre Festival was primarily the creation of an "entrepreneur" named Billy McFarland and a rapper named Ja Rule. It could have been an intentional fraud, a pie-in-the-sky idea, or both. At any rate, many people lost money on the misadventure, including Bahamian citizens and laborers, employees of Fyre, and investors.

I recommend watching the Netflix version and forming your own opinion. If you like the "American Greed" series on CNBC, you'll probably find this to be interesting as well. If you want to save yourself some time, I offer my takeaways:

So what does this all have to do with financial planning and wealth management? It drives home the point that human beings can fall prey to "shiny objects" and deviate from the focus and discipline that it takes to succeed financially. If you listen to the AOM podcast, you'll hear the guest of the show, Cal Newport, talk about the intensity of planning that Facebook and other social media firms put into manipulating your behavior when you are using their apps. It's changing human interactions and I think it has the potential to severely damage rational thought.

That said, I do think that the advances in technology, including social media are generally a good thing. But it's also important for us all to remember the drawbacks and moderate our devotion to it. In other words, go outside and play...preferably with some real humans.