Santa's got his reindeer...and believe me, Mrs. Claus doesn't always appreciate the money we spend on vet bills, food, and shelter for those animals.  But she realizes that even in this age of amazing transportation technology, some traditions should live on.  And the darned things give us a lot of joy.  I'm sure a lot of you have pets also, and you and I know how much happiness they bring.

Of course, Santa is a little bit of a data junkie, so I found some interesting information that shows just how much happiness our pets bring us.

PS, there's a link at the bottom of the article to enter our first "12 Days of Fun Facts" giveaway.  It's your chance to get the jump on Santa with a cool gift from the great people at Artifex Financial Group via Amazon.com.

How much happiness do pets contribute in your country?

There is much love to be found in relationships between pets and their owners. And, as love influences our lives for the better, so do our pets make us happier.

Even if data suggests that with love comes improved happiness, if other basic components of a person's happiness, such as economic wealth, employment, and health, are lacking, owning a pet will only do so much to increase a person's happiness. Using primary pet ownership data—collected through a pet ownership survey of 27,000 people from 22 countries—paired with information about happiness levels worldwide, we found that while there is a positive dependence between pet ownership and the level of people's happiness, this relationship did not hold across all countries.

Conclusion? If you can afford a pet, you should live with a pet to increase your chances for greater happiness (click on the image for more info). 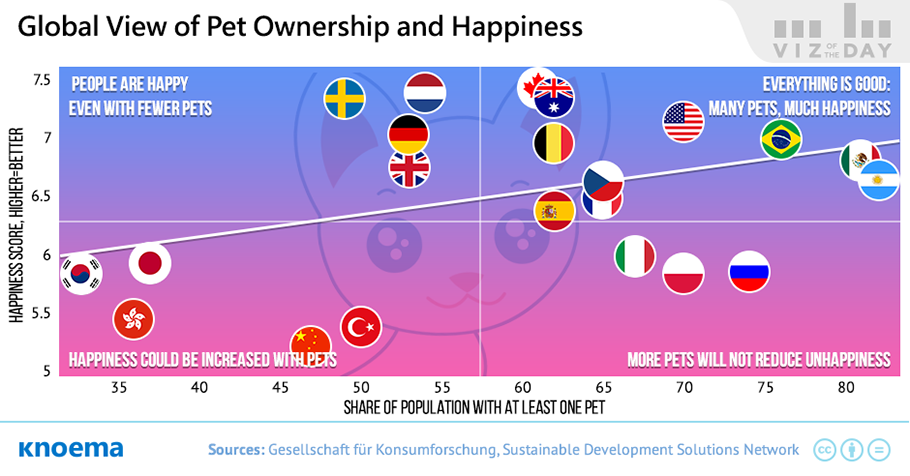