Recovery and the Fed Teases

After a bruising May, the first half of June brought good news to investors as equity prices climbed backtoward their early May highs.  Hints from the Federal Reserve that interest rate reductions may be in place as soon as July cheered markets in the US and deflated recession expectations among the pundit class.

The Treasury yield curve inversion has persisted as rates across the spectrum moved lower over the past two weeks.  At this writing the 3 month T-Bill yield has fallen below the Fed’s range of 2 ¼%-2 ½%, trading at roughly 2.15%.  The market is forcing the Fed’s hand as longer term yields sag lower, leaving the rates they can control out of sync with those the Fed cannot control directly.  The current US Treasury yield curve compared to year end 2018 is shown below. 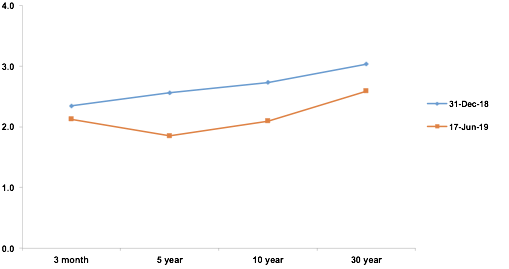 When we published this two weeks ago, all charted rates were roughly 25 bps higher.  The decline over the past two weeks reflects a strong US dollar, low reported inflation, stable inflation expectations and strong demand for credit instruments.  A normalized range for the 3-month Bill based on the current 5 and 10-year note yields would translate to 1 ¾%-2%, 50 bps below the Fed’s current target.

Barring unexpected news on inflation, it is increasingly likely that the Fed will reduce its targets once and perhaps twice over the balance of this year.  Recall that at the end of 2018, market participants were expecting two to three short-term rate increases in 2019.  Market pressures have pushed the Fed in an opposite direction.

Oil markets have been very active during the first half of June.  Much of the action has trended to the downside, which is a bit surprising given the sharp escalation of tensions in the Middle East.  Iran has begun to make a good deal of warlike noise and is suspected by US and other intelligence agencies to have been behind last week’s mine attacks on tankers in international waters.  In addition, the mullahs have announced their intention to imminently surpass the enriched uranium stockpile limits imposed by the 2015 JCPOA, creating a roadblock for ongoing EU efforts to preserve the agreement.[1]

The recent, persistent softness in crude prices is counterintuitive based on past experiences.  Despite gathering signs of conflict in the region, the movement of prices since a late April peak for WTI at roughly $67/bbl, has been steadily lower.  Speculation that Iran is behind recent tanker attacks has led to the conclusion that rather than directly challenging the US military, Iran’s goal may be to create an impression of growing instability in the region, expecting oil prices to jump as they have in past, similar situations.[2]  The chart below details the closing prices of WTI futures over the past year. 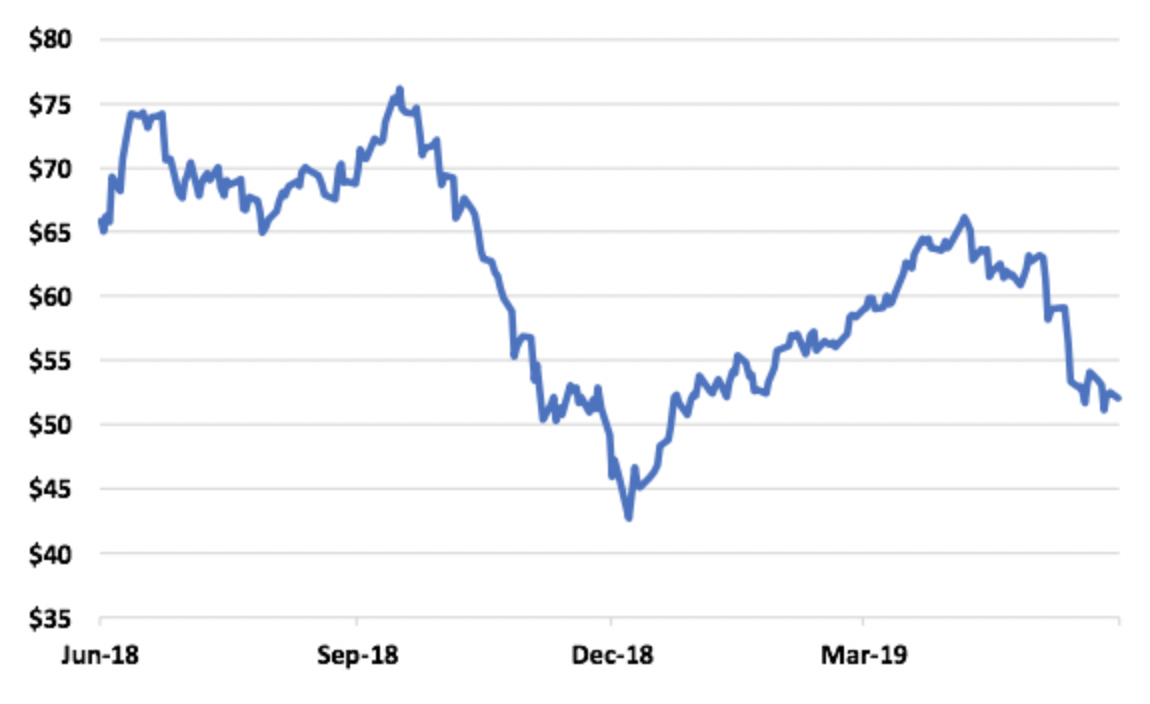 It is difficult to escape the conclusion that the dramatic increase in US crude production over the past several years has effectively put a cap on oil prices.  Regardless of turmoil or supply threats elsewhere, US producers have been able to pump more and more crude when prices are relatively high.

One important by-product of declining crude prices is a similar drop in gasoline prices, which has the effect of increasing US consumers’ disposable income.  After a seasonal runup in the Spring, falling crude quotes have led a significant reduction of gas prices at the pump.  The following chart shows unleaded gasoline futures prices over the past 12 months.

Whether the prices of crude oil and gasoline continue their decline to late 2018 levels remains unknowable.  What we can assert is that the era of kowtowing to foreign oil producers under threat of supply and price disruptions appears to have ended.  With the Middle East in an intensifying state of unrest, the fact that oil prices are declining is a testament to the increase in total world supply that US production has created.

The US political atmosphere is becoming increasingly toxic with the first Democrat primaries just over 6 months away.  Democrat front runner, former VP Biden, is directing his campaign at the President almost to the exclusion of other candidates for his party’s nomination.

Several recent national polls show most of the leading Democrat candidates beating the President.  Our thought is that this far in advance, polls characterizing the state of the Presidential race are of little value. One poll also registers a reduction in the percentage of respondents who are optimistic about the economy to 57% from 63% in February.[3]  While the number has declined, it still represents a strong majority and suggests that the uptick in economic activity over the past two years is being felt at many levels of the working populace.  On the other hand, the country, based on this same poll, is almost equally divided on whether the President should be impeached.[4]  .

Given the current configuration of Congress, it is possible that Articles of Impeachment could well be sent up by the House.  But the next step, a conviction on the impeachment charges and removal from office by the Senate, is unlikely to occur absent some startling new revelation of misconduct by the President and subsequent loss of his Republican congressional support.

On one level, the 2020 election will be a referendum on impeachment with some 20 Republican senators facing reelection battles.  Of course, one should not view current polling as dispositive regarding an election 18 months away, but we can expect a steady diet of polls and (premature) conclusions as November 2020 approaches.

Investors will be well served to acknowledge and observe polling data but to avoid making investment decisions based on the publicized analysis and conclusions, which are only opinions.  It is difficult to imagine voters deciding to remove a President when well over half the country remains optimistic about the economy’s future, but then very few rational observers saw Mr. Trump winning the last election. The unexpected has become expected.  Ignoring political noise and remaining focused on long-term goals and the plan to achieve them will consistently provide investors with the highest probability of investment success.